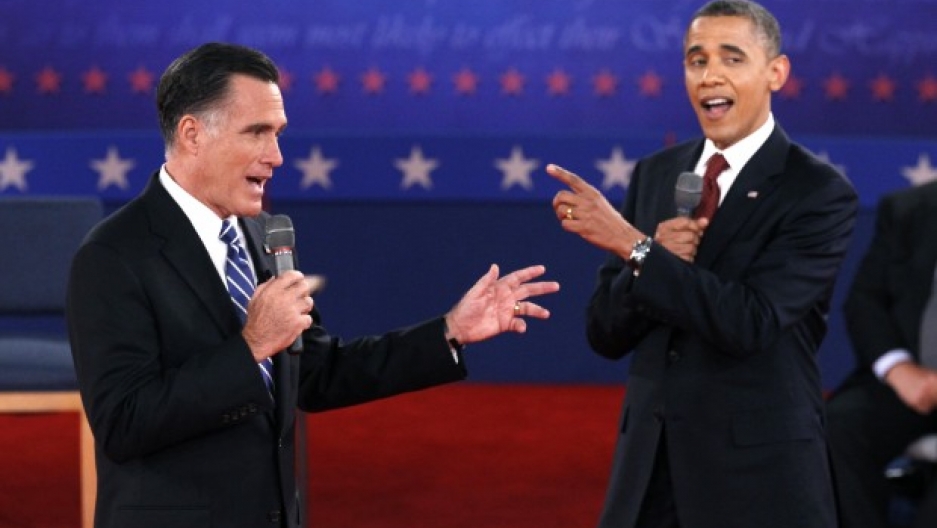 Share
The topic of renewable energy came up early and often during Tuesday's presidential debate, with both President Obama and Mitt Romney voicing their support for green energy. But neither man spoke about the environmental benefits, let alone the topic of climate change. American political candidates, in general, seem to be having a hard time making that connection this campaign season. Take the case of Republican Congressman Joe Heck, who is in a tight re-election contest in Southern Nevada. When Heck gazes out his window in the city of Henderson it's bright and sunny. It looks like this about 300 days a year here in the southern Nevada desert. Capturing and converting those rays of sunshine into energy means one thing to Heck. "There are a lot of jobs that can be potentially associated with our energy policy." Heck's favored energy policy includes tapping into more coal, oil, and natural gas, as well as renewable sources like solar and wind. Solar energy, in particular, has gained a lot of popular support here. Heck is a physician by training. I asked him if his support for renewable energy is also driven by scientific and environmental concerns, and if he'd support curbs on greenhouse gasses. "I think on that the devil is in the details. When you start looking at trying to regulate something like carbon dioxide, which is a natural , biological process, you start running into areas of confusion," said Heck. To clarify, I asked Heck if he believes climate change is happening. "Well, I think certainly over the millennia, we've seen changes in our climate both ways, and I think throughout the future millennia we will continue to see climate change that goes both ways. But the issue for this election is not what's going to be happening in the next 200 years, it's going to be what's happening in the next 12 months." Heck answered most all my questions, on a range of topics, directly. But not this one. His Democratic challenger, John Oceguera, also mentions green energy on his campaign web site without addressing the environmental benefits. (Oceguera's campaign staff didn't respond to interview requests.) None of that surprises Christopher Stream. He's the director of environmental and public affairs at UNLV. "Because climate change is so low on the list of concerns, you would see it as an elected official: 'I am not going to tread into that debate when it currently is not something my constituents care about. And can only be used as fodder against me in an upcoming election, if I tread too far into it and say it's a big deal, or that I believe it or I don't believe it.'" Yet Republicans from Joe Heck to Mitt Romney repeatedly bring up the topic of green energy. "I think the Republicans hope to seize on energy again to draw a contrast between Romney and Obama in terms of: What's the appropriate role for government?" said UNLV political scientist John Tuman. President Obama says government investments in wind and solar have supported nearly a quarter million jobs over the past four years. Many Republicans argue the pricetag for those jobs was too high, a waste of taxpayer money. "We've got to get out of the business of picking winners and losers," said Joe Heck. "Because I think the last round has shown that we've done pretty well at picking losers, not winners." That's also a point Mitt Romney made during the first presidential debate. The Obama Administration has made some green energy loan guarantees that have gone belly up, most notoriously to the company Solyndra in California. But most of the companies that got government support remain open for business. The government stepped in, in part, because traditional sources of energy — like coal and gas — are still far cheaper to produce than solar or wind. I asked Joe Heck if he would back government support for new solar, wind, or geothermal projects in his state. He said he'd have to look at the business model of the entity looking for support. Chris Stream at UNLV says, with the uncertain economics of renewable energy, that's a smart political response. "If I was an elected official, I would tread very lightly on renewable energy. So I would say right now it's probably a bumper sticker, it's a wait and see kind of a mentality. I (speaking as a politician) want to talk about it because I think it holds out hope for economic growth, but I also don't want to pin all my hopes on it happening within my next election cycle." Perhaps politicians will feel more at ease having a more detailed policy discussion about green energy on Wednesday, November 7th.