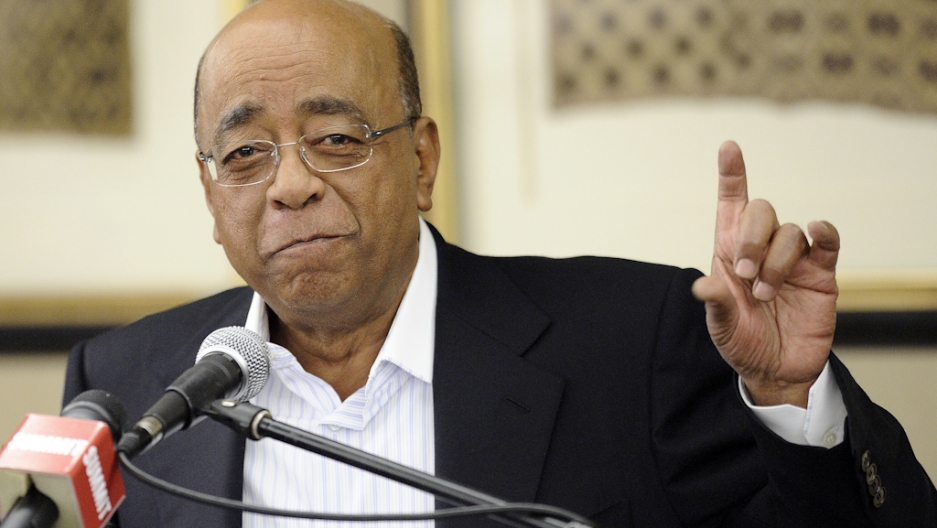 Sudanese-born billionaire Mo Ibrahim, founder of the Mo Ibrahim foundation gives a press conference on October 4, 2012 in Johannesburg to announce a one-off extraordinary award worth $1 million to Archbishop Desmond Tutu in recognition of his lifelong commitment to speak truth to power. Ibrahim said the award was not designed to replace his annual excellence in African leadership award, given to African leaders who peacefully step down from power. Since 2006 the telecom mogul's foundation has tried to give one African a prize of $5 million, spread over 10 years, followed by an additional $200,00 a year for life. But due to stringent criteria, he has not always been successful.
Credit: STEPHANE DE SAKUTIN
Share

JOHANNESBURG, South Africa — There is no winner of the 2012 Mo Ibrahim prize for African leadership.

The $5-million prize, established by Sudan-born telecom entrepreneur Mo Ibrahim, is supposed to be awarded each year to a democratically elected African leader who showed excellent leadership and a commitment to good governance, and who has voluntarily left office.

But in six years of the prize, there have been only three winners. This year the prize committee again said no candidate had met all of the tough criteria.

"If we say, 'we're going to have a prize for exceptional leadership,' we have to stick to that. We are not going to compromise," Ibrahim said, announcing the news at a press conference in London.

"We're not saying, every year we have to find somebody," he added.

The monetary award serves to encourage leaders of African countries to leave office after their terms expire, and build positive legacies on the continent instead of trying to hang onto power.

The prize committee last year hailed Pires' role in transforming Cape Verde, an archipelago of 500,000 people off West Africa and a former Portuguese colony, from single-party autocracy to multi-party democracy.

Mary Robinson, former president of Ireland and a member of the Ibrahim foundation's board, said it was "inspiring" that three winners had been found.

"Speaking as a European, I don't think in six years we would necessarily have three European leaders who would qualify," she said during the announcement Monday.