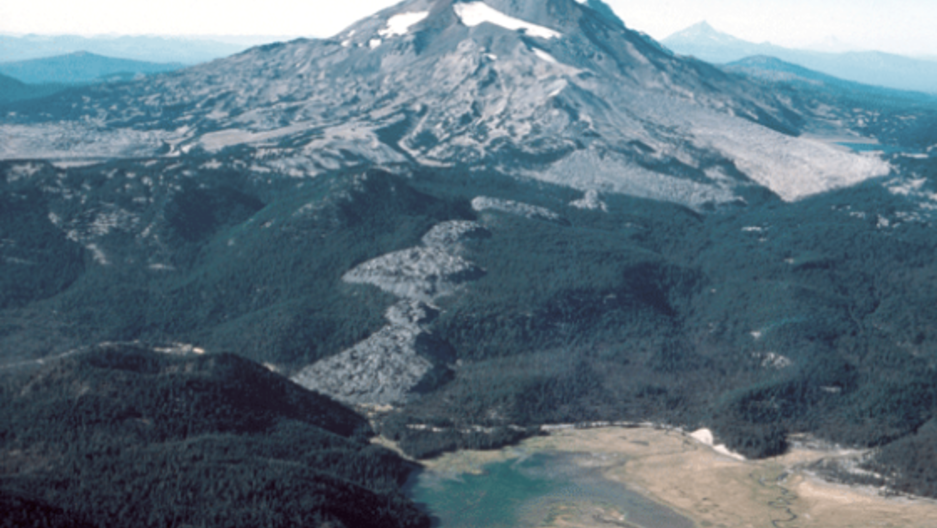 Geothermal energy from the Newberry volcano in Oregon has the potential to power a city of a million people. (Photo courtesy of the U.S. Geological Survey.)

The U.S. Bureau of Land Management recently approved a project to tap into a volcano in the Cascade mountain range in Oregon. The company, Alta Rock Energy, will drill into Newberry volcano, which has been dormant for some 1600 years.

Blackwell, a scientific adviser on the project, said the essence of the project involves drilling two wells, and pumping water between them. The water is heated by the geothermal activity under the volcano — and then used to spin turbines, just like a regular power plant.

"The water that is produced from that well will be re-injected back into that first well and the cycle just continues," he said.

The water is heated to some 600 degrees. The question, though, must be is it safe?

"The process is very similar to the fracturing that they use to get the gas shales," Blackwell said. "But, in particular, with geothermal, there’s been a number of high-level studies to determine how to do this in the best, safest way, and how to monitor it to make sure the process doesn’t cause some kind of a problem."

These specific wells are located on federal land, but Blackwell says its already been cleared of trees, so wildlife activity is limited.

Blackwell also argues that these wells will take up very little space — which is also good for the environment.

In fact, on the drill pad, which occupies, I think, about five acres, and all of the equipment will be on that pad," he said. "There’s a road, but the roads are already built because of the timbering."

If everything develops as they hope, the Newberry mountain is project to be able to produce about 2,000 megawatts of electricity, basically enough power for a city of one million people.

"The potential is immense, because once we can develop the technology, then we can make accessible areas which were not previously utilizable from geothermal power," Blackwell said. "This could really increase, by orders of magnitude, the amount of geothermal power that the United States could develop."

Currently, Blackwell says, about 3,000 megawatts of geothermal power are produced in the United States. He's optimistic that if this test is successful, that number could grow by a factor of 10 or 20.

Blackwell's hot on geothermal power because it's what's known as baseload power — it operates year-round, all day, unlike solar of wind, which require specific weather conditions to operate.

Typically, baseload power is either coal, natural gas or nuclear.

"Compared to coal, geothermal is extremely clean, there are no emissions. The technology would be somewhat similar to the shale gas. But of course, again, burning gas generates CO2, but not nearly as much," Blackwell said. "Nuclear has a whole series of very complicated problems that have to be dealt with."

Of course, as good as geothermal sounds, there's a catch.

"One we haven’t done it, and two it’s going to be probably a little bit more expensive than most of the other sources, with perhaps the exception of nuclear. But that’s why it’s important for there to be some support for the research of this type, because we need to find out if this is a source which we can develop," Blackwell said.