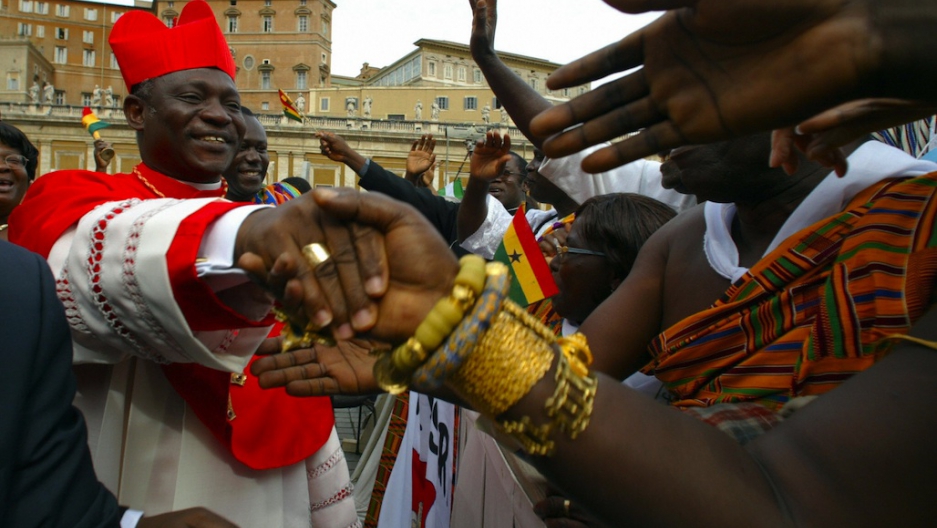 This 2003 photo shows cardinal Peter Kodwo Appiah Turkson of Ghana after being ordained in a ceremony at the Vatican.
Credit: PATRICK HERTZOG
Share

A Roman Catholic cardinal has caused an "uproar" during an international meeting of bishops after screening a fear-mongering YouTube video that makes shaky claims about the spread of Islam in Europe, Reuters reported.

The apocalyptic seven-minute video, uploaded three and a half years ago, cites dubious statistics to warn that "Islam will overwhelm Christendom unless Christians recognize the demographic realities, begin reproducing again, and share the gospel with Muslims." The film, called "Muslim Demographics," has been viewed more than 13 million times since 2009.

Peter Turkson, a Ghanaian cardinal based at the Vatican who is president of its Council for Justice and Peace, showed the video over the weekend as part of three weeks of meetings among 262 Catholic bishops, Reuters reported.

The news outlet reported that the screening caused an "uproar" and "sparked consternation" on Monday.

"As we were arriving this morning I was asked several times 'Who planned it? Whose was it? Who is behind it?" Father Thomas Rosica told journalists, according to Reuters.

However, the screening of the video has caused "the most animated" discussion at the conference, Rosica told reporters. "Islam is the buzzword," he said, according to Reuters. The meetings are focused on attracting "lapsed Roman Catholics in developed countries" back to the church, Reuters said.

The alarmist video, which casts Islam as a direct threat to Christianity, purports to be "a report on the world's changing demographics," delivering figures on low fertility rates in Europe — presumably among non-Muslims — to make bold predictions about shifts in "culture."

"As the population shrinks, so does the culture," the narrator says, going on to add: "In a matter of years, Europe as we know it will cease to exist.... In just 39 years, France will be an Islamic republic."

What do you think of the video? Watch here and let us know in the comments: