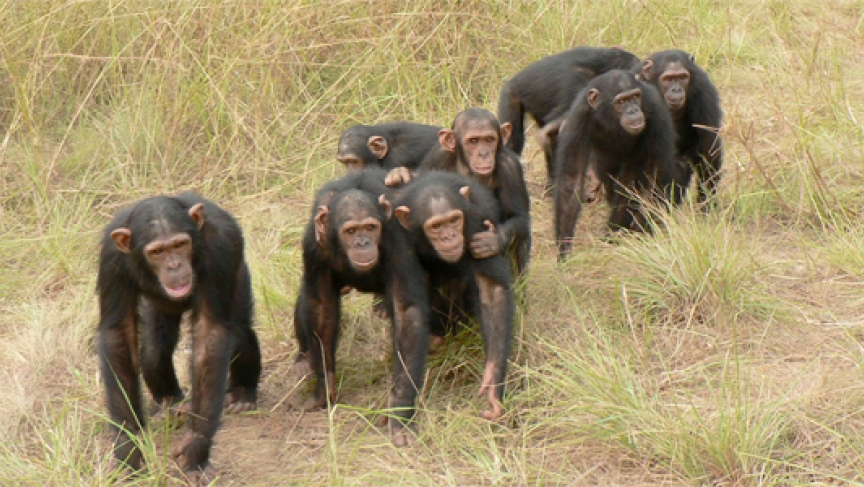 In the Republic of Congo, a group of chimpanzees at the Tchimpounga Chimpanzee Sanctuary return from the forest. They're headed back to their dormitory for the night. (Photo by Victoria Wobber.)

Editor's note: This report is part of a joint project with NOVA.

We humans are exceptionally good at manipulating our environment — much more successful compared with other primates.

Is it because of our intelligence? Our opposable thumbs? A clever experiment conducted in Africa and Europe suggests another answer: our social skills.

On a warm afternoon in Cambridge, Mass., a few dozen kids and adults have found refuge on a shaded playground. Victoria Wobber — an anthropologist from just down the road at Harvard University — stands off to the side.

The scene is so familiar that it’s hardly remarkable. And yet, Wobber is here to point out something fundamental about who we are as human beings, and who we grow up to become.

“Look at the boy using a shovel to get the sand into that container,” she says.

The kids on this playground — even the ones who are too young to speak — are already little engineers, using tools to build structures out of sand. But where does this ability to understand our environment and then manipulate it so successfully come from? And why are our closest primate relatives unable to do it as well as we can? In other words, what sets us apart?

Wobber came up with a way to unravel these questions as part of her Ph.D. work at Harvard. She decided to challenge little kids and little apes of the same age — between two and four years old — with the same simple tasks.

Wobber teamed up with scientists in Germany to study the kids, and she went to Africa to study the apes: 25 chimps, and 17 pygmy chimps, also called bonobos.

To study bonobos, Wobber visited a wildlife sanctuary in the Democratic Republic of Congo. In one experiment — which she videotaped — you can see her inside a tiled room. A metal grill separates her from a 3-year-old male bonobo named Kubulu.

Wobber holds up two pieces of pipe. The pipes are designed so one can attach to the other. She tries to put them together three times, and she fails on purpose each time. Kubulu watches the pipes intently.

The point of this experiment is to see whether Kubulu understands the goal of the experimenter — to connect the pipes — by doing it himself. On the video, you can see as Wobber hands the tubes over to Kubulu.

Rather than putting the pipes together, he plays with them. Kubulu pops one in his mouth, climbs the wall, leaps down, jumps on top of the pipes, and then pushes them across the floor.

“And so that’s typically what most chimps and bonobos did,” Wobber explains. “They said, ‘Great, you’ve given me a great toy. Thank you, I’ll go play with this.’ Rather than, well, here the goal was to put the two ends of the tubes together.”

Wobber has a second video — this one recorded at the Max Planck Institute for Evolutionary Anthropology in Leipzig, Germany — which shows the other half of the experiment.

In the video, a 3-year-old German boy sits across a table from a woman. Just like in the experiment from Africa, the woman tries to put the two pipes together three times, and fails. No words are spoken.

“The kid here is really watching very carefully what (the experimenter is) doing,” Wobber says. “But you can see he’s looking at her face as a source of her intentions — what she’s doing with these strange pipes.”

The woman then slides the tubes across the table to the boy. Within a few seconds, he successfully inserts one tube into the other. As soon as he is done, he looks up at her face for approval — to see how he did.

Over the course of the study, not all the kids were successful at this task, and not all the apes failed. But, in general, the kids got it and the apes did not, in this and about a dozen other experiments – including ones involving tangible rewards for succeeding (balloons for the kids, bananas for the apes).

So what do the results mean?

“I think the study’s critical finding is that human children are very sensitive to the goals of another (person),” says Amanda Seed, a psychologist at the University of St. Andrews in Scotland who studies the evolution of human behavior.

She calls the new research groundbreaking.

Consider the experiment involving the pipe. In general, the chimpanzees and bonobos tossed it around and jumped on it. That is how they learn about their environment; they build an understanding of the world by themselves, from scratch, working out how to use tools and solve problems through trial and error.

But the children in this experiment were constantly watching people. Amanda Seed says kids learn a lot from others — even without language. Children look into the eyes and faces of adults to understand what those adults intend to do. She says these subtle cues provide humans with a rich source of information about our world, and give us an advantage over chimps and bonobos.

But Seed does raise some concerns about this study. For instance, it was always a human experimenter doing the demonstrating.

“The challenge for the chimpanzees and bonobos is that much greater,” she says. “They have to read through the behavior of another species to appreciate the goals that that species is trying to perform.”

But Seed says this new study adds to a growing body of evidence that our primate cousins are not as focused as we are on the actions and intentions of others. She says the new research provides an elegant demonstration that our ability to manipulate our physical environment, a hallmark of what it means to be human, comes in part from our social skills.

A new view of the playground

Back at the playground in Cambridge, there is a lot more going on here when viewed through the lens of Wobber’s study. The kids are not just playing on slides and in the sand. They are watching others closely — and learning from them.

Wobber looks over at a boy in a blue-and-white striped shirt. He's about 2-years-old.

“He’s pointing out something for his mom there,” she says, as if providing color commentary. The boy picks up a rag. “[He’s] trying to show that to his little friend over there in the bathing suit.”

The boy’s mom picks her son up and moves him to a different part of the playground, where he soon finds a new toy. Rather than playing with it by himself, he holds it up, shows it to his mom — and then looks into her eyes.