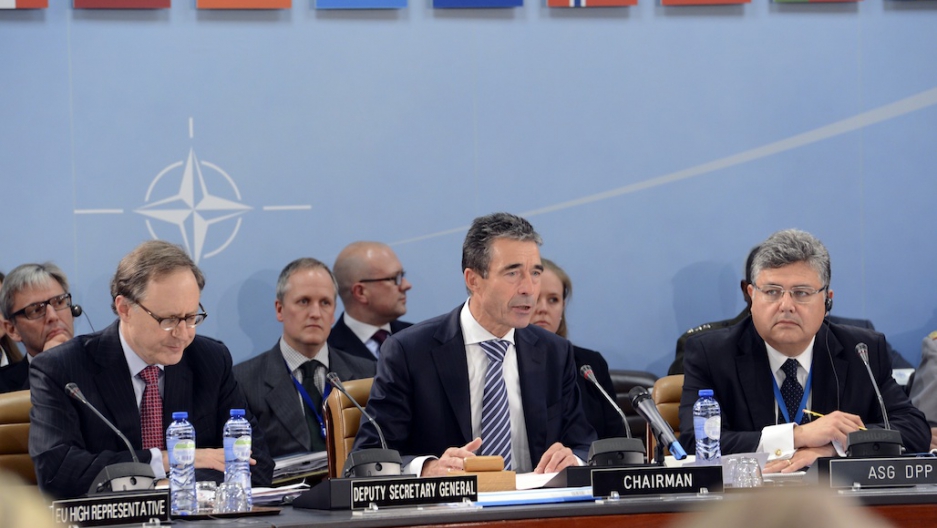 NATO Secretary General Anders Fogh Rasmussen (C) sits prior to the start of the Oct. 9, 2012 NATO Defense Ministers meeting at NATO headquarter in Brussels. Rasmussen warned Tuesday against the dangers of the conflict in Syria escalating, saying alliance member Turkey had shown commendable restraint in response to shelling of its border area.
Credit: Thierry Charlier
Share

Tensions between Turkey and Syria have continued to escalate since shelling from Syria hit Turkey on Oct. 3, killing five civilians.

After days of artillery exchanges between the countries, Turkey on Wednesday forced a Syrian passenger jet traveling from Moscow to land in Ankara, where authorities confiscated cargo believed to be military communications equipment or “missile parts,” according to Turkish state television.

NATO this week said that it is prepared to assist in Turkey's defense.

"We have all necessary plans in place to protect and defend Turkey if necessary," NATO Secretary-General Anders Fogh Rasmussen said.

Is the violence in Syria becoming the regional conflict everyone fears? Will NATO be drawn into the fray? To what end?

For some answers on these questions, GlobalPost turned to Austin Long, an assistant professor at Columbia University's School of International and Public Affairs with expertise in security and conflict.

GP: With its expression of support for Turkey Tuesday, do you think NATO will begin to have a wider role in the Syria conflict? What kind of a mandate would it need for that?

Long: There is a definite possibility, though currently a very low one, that the Turkey-Syria conflict could pull NATO in. The mandate for such involvement would be based on Article 5 of the North Atlantic Treaty should Turkey ask for help when attacked. Article 5 pledges the signatories to the position that "an armed attack against one or more of them in Europe or North America shall be considered an attack against them all." However, Turkey's military alone is substantially more capable than Syria so NATO involvement might be limited to support such as intelligence.

How are international institutions critical — or not — to the resolution of unrest in Syria, and related instability in the region?

The UN could potentially play an important role in the conflict but is deadlocked in the Security Council. NATO provides a potential mechanism for intervention but at present none of the NATO states, including Turkey for now, favor such intervention. So at present international institutions are on the sidelines, though they could be critical in the future.

What is the status of UN Security Council action on Syria?

See above — Russia and China together, with Russia in the lead, have blocked anything stronger than condemnations.

Shelling between Turkey and Syria doesn't seem to be in anyone's interest. Why do you think it has continued?

I think a few things are at work. From the Syrian perspective, Turkey is harboring and probably supporting terrorists (the Free Syrian Army). Thus it is likely that from the Syrian perspective a few stray rounds across the border are the least the Turks can expect for this perfidy. From the Turkish perspective these stray rounds are a major provocation. Once both sides actually engaged, whether the initial rounds were truly stray or not, neither side is willing to be seen as the first to capitulate.

How likely is a political solution in Syria? Does increased regional tension complicate the odds?

A political solution, absent a change in the attitude of Syria's supporters in China, Russia, and Iran seems unlikely. The ethnic and religious dimensions of the conflict are beginning to loom larger as Sunni Islamists, including some extremists, increasingly become prominent in the fighting and the Syrian Kurds receive help from their Iraqi Kurd brethren. This complicates possible solutions, as does the simmering tension between Israel and Iran, the spillover of the Syrian conflict into Lebanon and Jordan, and the internal politics of Iraq.

More from GlobalPost: Is there still a role for the UN in Syria? Q & A

Watch below for analysis of the conflict from GlobalPost Middle East Editor Peter Gelling: