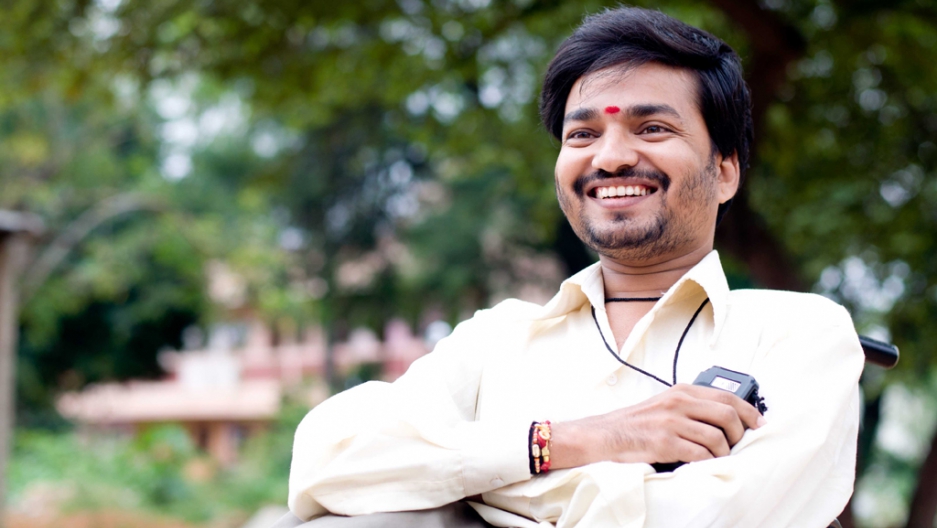 BANGALORE, India — In front of his tiny garment factory in Nagawara, a village 10 miles from Bangalore's center, 29-year-old Shankar Krishnappa smiles dismissively when asked about problems he faces at work.

Since opening his tailor business last December, he's already had to fight city hall when the electricity board cut off his power. And, because he's been confined to a wheelchair since he contracted polio in the first grade, he still has to get somebody with strong arms to carry him inside and set him down across the desk from potential customers when he bids for a new order.

But that doesn't bother him. "Before, many people used to avoid talking to me," Krishnappa said, speaking in his native Kannada. "They thought I might ask them for money because I am disabled. Now that I have my own business, they know me and have a new respect for me."

Krishnappa has the Be! Fund to thank for his recent success. The start-up nonprofit, which combines the balance-sheet acumen of a venture capital firm with microcredit's faith in the industrious poor, invested about $6,000 in Krishnappa, allowing him to open his business.

The Be! Fund — started by Lisa Heydlauff, a former teacher from the UK who runs a New Delhi-based nonprofit called Going to School — aims to create “heroes” like Krishnappa, people who could inspire poor kids from India's villages and slums to stay in school.

“What we do at Going to School is we tell stories to inspire kids to stay in school and use their educations to transform their lives,” Heydlauff said. “What we realized after a while was that we didn't have the stories we needed to change the world. We didn't have stories of young people who lived in poverty who started a business to solve a problem.”

“We tried working with a bank," she said, "working with a microcredit organization — everyone, basically — to try to say, 'Will you fund a young person who lives in poverty, age 18 to 29, who doesn't have a track record, with a new idea to start a business?' It didn't fit any of their risk profiles.”

With no other choice Heydlauff — who had about as much experience with venture capital as she had with skydiving — decided to try her hand at it herself.

Here's how she made it work:

With outreach programs and advertisements on radio and TV, it attracts business plans from some of India's poorest — and boldest — people. Then the fund treats them just like India's venture capital firms treat the latest tech start-ups.

Volunteers screen as many as 5,000 applications to make sure they really are economically disadvantaged, and that their business ideas really do address social problems. They choose 500 would-be entrepreneurs, and invite a couple hundred in for a three-level interview process during which experts evaluate their plans and suggest revisions. Finally, 15 of the most promising candidates are chosen.

Be! Fund staffers visit the project sites — from a farm with a broken down tractor to a " target="_blank">one-woman candlemaking unit — to conduct due diligence. Even though investments can be as small as $1,000, the entrepreneurs get to spend hours with volunteer bankers from DeutscheBank and UBS Warburg, as well as iGate-Patni founder Phaneesh Murthy and Leapstart founder Dev Roy, two prominent Indian businessmen who provided Heydlauff with her seed capital of around $50,000.

“It's not just volunteering time [for something] such as painting a wall or cleaning up a park or reading to the elderly. It's not just time intensive, it's intellectual capital intensive. And that takes this project to another dimension,” said Reshma Ghoshal, vice president in charge of corporate social responsibilty at DeutscheBank.

Unlike microfinance organizations, which rely on community peer pressure to secure their loans, the Be! Fund provides capital to individuals rather than groups, which ensures that creative risk-takers aren't held back by their more conservative peers. Where microcredit loans tend to max out around $1,000 for a group of five, Be! Fund investments range from $1,000 to $10,000 for a single entrepreneur.

More from GlobalPost: In India, food rots as people starve

Where microfinance tends to focus on traditional businesses, the Be! Fund finances innovative ideas that will create employment or solve other social problems through creating green energy, recycling waste or providing market access to isolated communities.

At the same time, though the fund operates like a venture capital firm in some ways, the investments are too small to generate significant returns. All nominal profits are funneled directly toward financing new entrepreneurs.

“All of us try to have quote-unquote charity dollars, and I've always felt that these charity dollars are traditionally used in fairly conservative models,” iGate's Murthy said. “The way I looked at it was, here is a powerful, grassroots movement ... for ideas which are created from within the community, by community people, for the benefit of the community.”

“This is about people helping themselves and helping the other people in the area that they live in. We thought it would create a kind of ripple effect,” said Anusha Bhagat, chief operating officer at UBS.

Since getting started in early 2011, the Be! Fund has invested $50,000 in 15 entrepreneurs in Karnataka, as well as one in Uttarakand and another in Delhi. Now, with added funding from DeutscheBank and UBS, the fund is expanding to the Mumbai and Maharashtra and aims to invest another $50,000 before the end of the year. A grant from the US Agency for International Development (USAID) is also on the way.

The stories are inspiring.

Take Krishnappa's tailoring business. For the past four years, he was working as a tailor in a local garment factory along with other disabled workers. But his employers paid them half what they gave the other workers. His idea: Start his own shop, hire disabled workers, and give them equal pay for equal work.

Gowramma, another Karnatka entrepreneur, employs three neighborhood women making a nutritional supplement for HIV positive people from poor communities. Because she makes the powder out of her home, it costs the local nonprofit 25 percent less than the commercial product they were using before. Earning a profit of around $200 a month, she's already generating a “return” for investors – though the Be! Fund plows the repayments they receive into other new businesses.

More from GlobalPost: India's poverty stats may be misleading, but they weren't fudged

Twenty-six-year-old Radhakrishna M. used $6,000 from the Be! Fund to buy a truck and get his commercial vehicles license so that the farmers of his isolated of Nagamangala Village would have a cheap and reliable way to get their produce to the market. Previously, they were only able to make the 10-mile trip twice a month.

Within three months of buying the truck, Radhakrishna was making a profit, and has already paid $2,000 back to the fund. Now 45 area farmers can grow high-margin produce without fear of it rotting before it gets to market.

Part of an agricultural community that primarily grows areca or betel nut — which is chewed like tobacco by millions in Southeast Asia and India — 30-year-old Archana Rajendra Hegde used about $3,000 in start-up capital from the Be! Fund to buy pressing machines to turn areca leaves and waste products into environment-friendly disposable plates, replacing plastic.

Starting out with just six employees, all poor women who used the extra cash to send their kids to school, Hegde soon discovered a lucrative export market for her product. And today, barely a year after starting her company, she employs 83 women.

“It's literally one woman who hired a village,” said Heydlauff.

It's not easy, and there have been setbacks. When the electricity board shut off his power, Krishnappa lost employees who couldn't afford to be out of work even for a short time.

But he's certain he'll win his former colleagues back. "I just reopened a couple months ago," Krishnappa said. "Once they see I'm going to survive, they'll come back. I already have one now as a trainee."