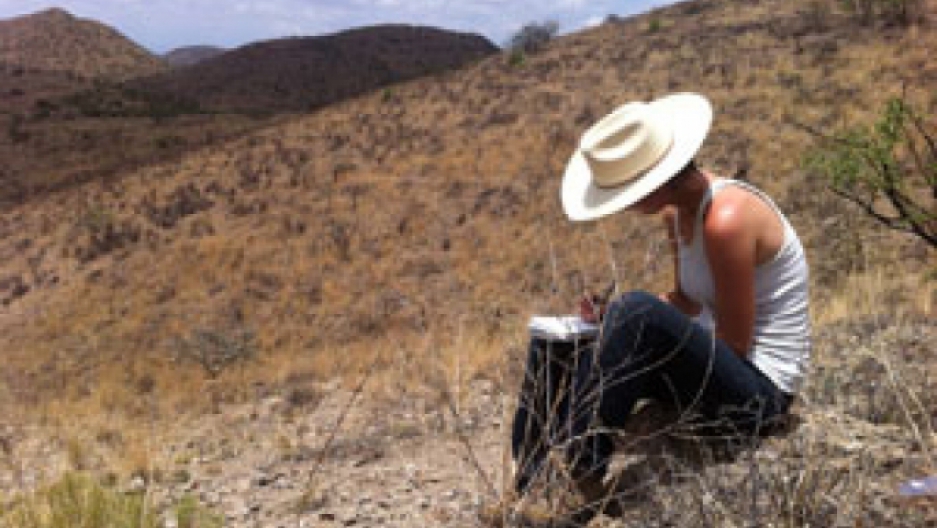 Our guide through the Arizona desert is an archaeologist named Jason de Leon. We're looking for the carcass of a pig that should be in a cage exactly where we're standing, underneath a little desert tree. But it's not.

"So I haven't been out here in a day and a half but something has come and literally pulled her through the cage. I don't even see the head. I mean, it's gone, unbelievable."

De Leon studies immigration, specifically the archaeological record that migrants and border patrol and even vigilantes leave in the desert. He collects everything from the basic to the more usual:

"We easily have over a thousand backpacks. I only have one curler set."

And occasionally, even the comical:

"I did find once a wallet with this person's identification from Mexico along with this little kitchy illegal alien driver's license that they'd purchased from Roswell, New Mexico."

But there's one thing that's actually really hard to find here — and that's the bodies that are left in the desert. Which brings us back to the pigs.

"So pigs are the standard proxy used by forensic scientists to understand human decomposition — they've got a similar organ distribution, body weight and skin type that are a pretty good analogy for what happens to the human body." 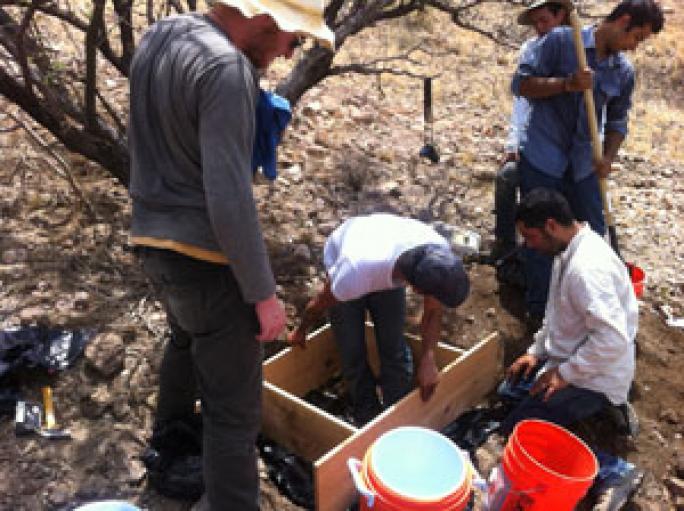 Archaeologist Jason De Leon helps build an altar for a woman found dead in the desert.

We know, of course, that after people die, their bodies decompose, especially in the harsh elements of the desert. But de Leon's experiment here is actually the first that he knows of in the Sonoran desert to explain how quickly bodies disappear and how good animals are at destroying the evidence.

Which raises an important issue: If bodies disappear this fast, how many immigrants are we missing? Most immigration figures are about the number of people caught. No one knows exactly how many get through, how many die along the way, or really even much about who these migrants are.

For the other major immigration waves in American history, we have monuments and museums: Ellis Island also has its own passenger records database. De Leon says this immigration, even if it's illegal, is not less important than previous ones. And his lab is one of the only places keeping a record of it.

What can we learn from all this? Lots of things, but mainly that migration, while down, is still happening. In fact, Francisco Loureiro, who runs the largest shelter in Nogales says he's had even more migrants in his shelter this year than last.

This makes de Leon's brand of archaeology fairly unlikely because he's studying a past that's not yet over. This is made especially clear when one of his researchers, Haeden Stewart finds, one day, a body in the desert. Stewart knew from all the pig experiments, that this body had only been there a couple of days.

"What was really most shocking about it is just how close I had to be to recognize what it was, cause far away, even when we were coming back to look for it, it was really easy to miss."

They called border patrol, and agents came to collect the body, before the sun or the vultures could set in. Only a couple of days later, the researchers came back to this place and already it looked like everywhere else in the desert mountains — dusty and open and steep.

De Leon and Stewart and the other researchers brought with them one of the most permanent materials they could think of cement to build a small altar with there. So that now anyone else walking through this part of the desert will know that something did happen here, and none of us should forget.