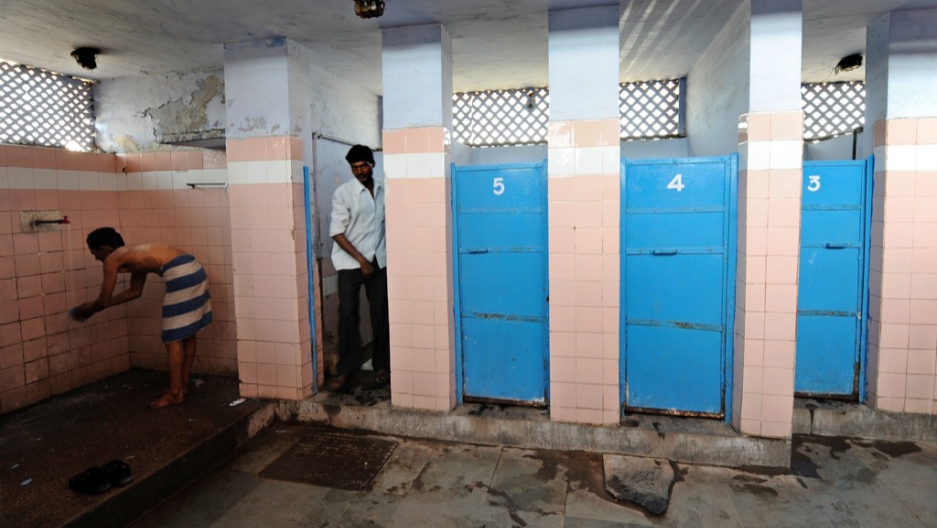 An Indian man (L) washes as another comes out of a toilet in a toilet complex run by an NGO Sulabh International at railway station in New Delhi on April 23, 2011.
Credit: PRAKASH SINGH
Share

Religious folks to say God is everywhere, which they mostly seem to believe is a good thing. Only half of that is true of excrement here in India.

So why has a self-evident statement by the rural development minister that India needs toilets more than it does temples raised the hackles of some religious groups here?  No reason, I suspect, except the political party he represents.

On Sunday, the Vishwa Hindu Parishad (VHP) -- a group that is allied with the Bharatiya Janata Party -- held a protest outside the residence of Union Rural Development Minister Jairam Ramesh over the comment. On Saturday, the minister's own Congress Party distanced itself from the remark, saying “We respect the sanctity of every religious place irrespective of the community it belongs to. I do not know the statement attributed to Ramesh. Perhaps it could have been distorted and he is in the best position to explain.” Meanwhile, just about the only ones willing to defend Ramesh were the folks at Sulabh International -- an NGO committed to building toilets and ending the practice of hiring Dalits to scrape and carry out excrement from dry latrines.

This is a perfect example of the stupidity that too often dominates Indian politics. Rather than shutting up and getting down to the business of improving lives, we're descending into pointless name-calling and protesting over something on which, quite frankly, everybody secretly agrees.

Regardless of where you stand on religion, it's obvious that India has no trouble building temples. Indeed, one of the most salient differences between toilets and temples is that people will donate land and money and labor to build temples, they will fight for them tooth and nail, and the government will let them get away with virtually any skirting of the law in the process.  Toilets?  Not so much.

People have temples in their houses. Temples spring up on roadsides, in electricity boxes, in forests, astride highway medians, and just about anyplace that isn't moving too fast. So there's no demand and supply gap.

And however valuable temples may be in promoting desirable values or preserving cultural traditions (I will leave it to the Richard Dawkins crowd to point out their other influences), it would be very difficult to argue that the addition of another hundred thousand or so would actually SAVE LIVES. Meanwhile, that's patently obvious when it comes to toilets.

"With 638 million people defecating in the open and 44 per cent mothers disposing their children’s faeces in the open, there is a very high risk of microbial contamination (bacteria, viruses, amoeba) of water which causes diarrhoea in children," UNICEF puts it, rather more baldly than Ramesh.

One way that can be encourage: Toilets that actually provide soap and water. I wouldn't even object if somebody built a temple to go with each and every one.