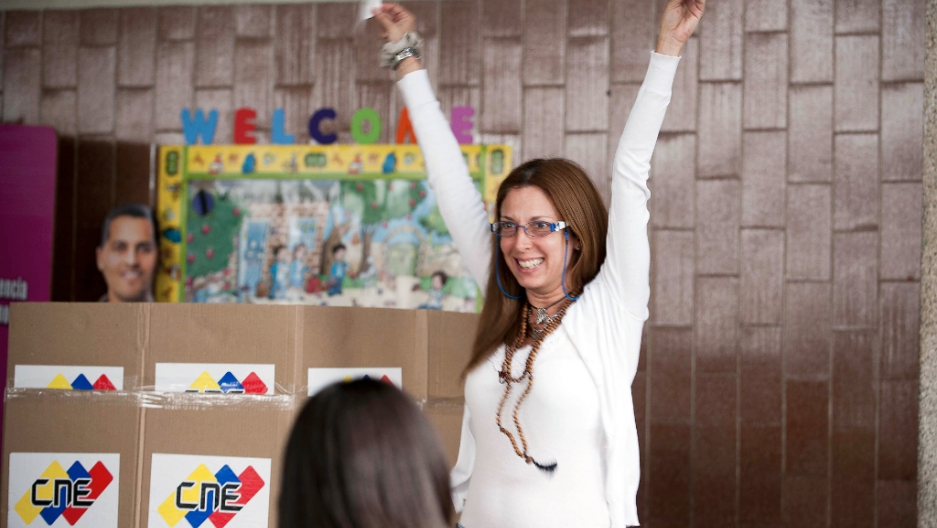 A woman reacts after casting her vote at a polling station in Caracas on October 07, 2012. Venezuelans went to the polls Sunday in the toughest election President Hugo Chavez has faced in almost 14 years in power after fresh-faced rival Henrique Capriles electrified the opposition.
Credit: Eitan Abramovich
Share

CARACAS, Venezuela — Venezuelans were up as early as 3 a.m. this morning to vote in the country's tightest presidential election since Hugo Chavez first came to power 13 years ago.

Motorbikes and trucks drove around the country’s barrios long before dawn, blowing bugles, air horns and playing campaign music in order to wake up the 19 million-strong electorate.

Chávez is facing Henrique Capriles Radonski, a state governor much younger than Chávez whose vitality appears to be drawing in the voters. While polls put Chávez ahead, many in the socialist president’s traditional stronghold — in the barrios and among the poor — have begun to turn.

In one such barrio just south of the capital, more than a thousand Venezuelans lined up outside a polling station at about 8 a.m. While campaign clothing is not allowed near polling stations, a group of motorcyclists circumvented the rule, riding past the line sporting pro-Chávez gear.

“There’s a war in the streets,” said Ana Gerra, who revealed who she'd be voting for after a Chavista truck roared past, waving a a red flag.

“It’s an abuse of power,” she said curtly. “There are many people passionate for Chávez. But Capriles represents the future.”

It was a slightly different story in the highly politicized barrio of 23 de enero, where Chávez himself voted. Walls were plastered, as always, with murals of Chávez himself, along with other left wing revolutionaries like Che Guevara and Fidel Castro.

But even here, dissent was visible.

Selling individual cigarettes next to a mural depicting Jesus at the Last Supper — surrounded not by his disciples but by Bolívar, Lenin, Marx, Che, Castro and Chávez himself — one woman waited to place her vote.

“I do see good in Venezuela but the people are tired,” said Nancy Rincones, 56, adding that those around Chávez may be more to blame for the country’s troubles. “I hate it when Chávez says that if you’re not a Chavista, you’re not Venezuelan. What am I, French, English?”