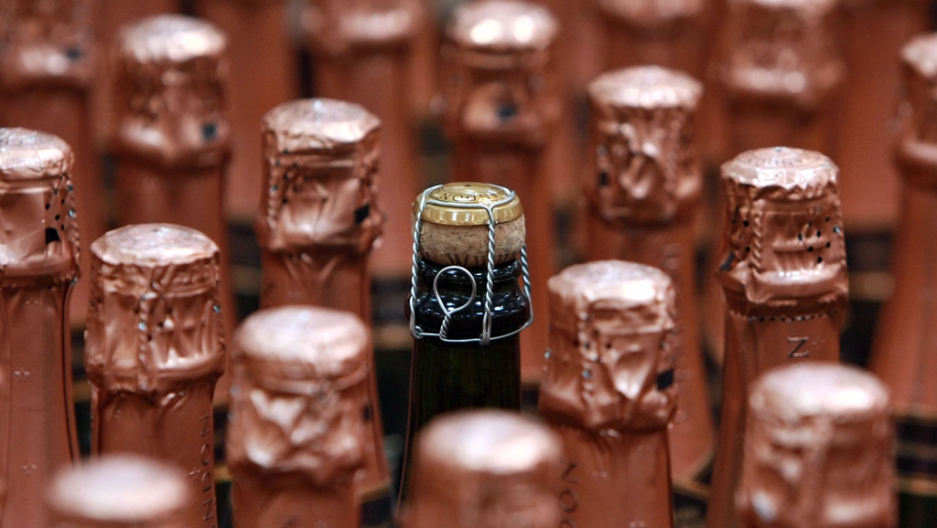 HAYWARDS HEATH, UK — On a warm fall morning, the Bolney Wine Estate is as close to an English idyll as you’re likely to find. Fields of ripening grapes bask under a warm, lazy sun as small woodland creatures scurry along quiet country lanes lined with bramble bushes.

But at the heart of this sleepy pastoral scene, amid a small collection of farm buildings where grapes will soon be pressed and processed into a modest selection of wines, there’s an unmistakable buzz.

Outside a large, cool barn where cages of unlabeled bottles are fermenting, a group of visitors murmurs in anticipation of a sampling session that will end its tour. Over by the bottling room, a Japanese television crew interviews winemaker Sam Linter.

“We’ve had a few TV people coming through since the award,” explains Stuart Barford, Bolney’s sales manager, nodding in the direction of the Japanese team as it troops into the vineyard’s small cafe to film shelves of red, white and rosé wine on sale.

In the world of winemaking, the award — a “Gold Outstanding" medal that judges at this year’s International Wine and Spirit Competition hung around the neck of Bolney’s 2007 Blanc de Blancs — is a big deal.

In honoring the “immense charm” and “crisply defined palate” of the sparkling chardonnay over some 3,000 rivals, the IWSC’s respected jury put the Bolney vintage on a pedestal more frequently occupied by French champagnes.

Bolney isn’t alone. Over the past decade, English sparkling wine producers have emerged from relative nowhere to scoop up more international accolades than any other country. Their prominence at events to mark Queen Elizabeth II’s 60th anniversary as monarch this year helped further raise their profile.

Although still overshadowed by champagne, producers such as Ridgeway and Nyetimber — like Bolney, both located near the town of Haywards Heath, south of London — and Camel Valley, in southwest Cornwall, are becoming household names at home and abroad.

Their success has prompted a French champagne house to acquire land in the UK. Others are expected to follow even though they wouldn’t be permitted to label their English products “champagne” because of strict European Union regulations governing regional branding.

Much of the recent interest is due to the improving expertise of English winemakers who have spent decades experimenting to find the most suitable vines and honing their cultivation techniques. Experts say climate change has also been crucial.

“We now have warmer growing conditions and that has enabled us to produce varieties that are much more acceptable to the market,” says Stephen Skelton, a pioneer of English viticulture who works as a consultant to vineyards on sparkling wine production.

This year is no exception. Although unusually heavy rains in June delayed the ripening period, the same late summer sunshine that helped London host a successful Olympics should ensure that 2012’s grapes are bursting with flavor.

“We won’t have a bumper crop, but we could recover and have a decent harvest thanks to the late sunshine,” said Barford, proudly showing off Bolney’s 20-acre, south-facing field of Rondo and Dornfelder varieties. “A longer growing season gives it greater complexities.”

“If you think about Cox’s Orange Pippin apples, Bramley apples, raspberries, blackcurrants, gooseberries, rhubarb — all those classic English fruits have fantastic acidity,” he says. “It’s the ability to capture the acidity and ally it with sufficient sweetness that makes our wines stand out.”

“The best English sparkling wines are equal and in many cases better value than champagne,” he adds. “It’s certainly not hype to say that. It’s been proved in tastings by experts, both French and English.”

For estates such as Bolney, creating highly drinkable vintages has become relatively easy. Barford says even the vineyard’s gold medal winner was merely a sideline “experiment” to its main focus — red wines, including pinot noir, another IWSC medal winner.

But while they may be able to match and even better their European rivals in quality, British winemakers are unlikely to ever eclipse their sales, even with 28 million regular wine drinkers right on their doorstep.

That’s largely down to scale. English sparkling wine may be in demand, but production levels are tiny compared to the vast operations of northeastern France. Fewer than 4,000 hectares of land are under vine in the UK compared to 83,000 hectares in the Champagne region alone.

That means English producers must struggle to compete in price.

“If you make 10 bottles successfully, that’s not a business,” says Skelton. “You have to make the right number of bottles to sell from the acreage. The investment and the product have to balance to make a viable business and that’s always a problem in the UK. Very few vineyards get it right.”

Back at Bolney, Barford insists the estate’s 10-strong team — soon to be augmented by Polish and Romanian grape pickers — is getting it right. He says although its wines, which retail between $17 and $41 per bottle, may not be able to compete in price, they certainly hold their own in quality.

“We’re trying to make our wines better and stick to what we know. If you get too big, you can lose out on the consistency,” he says strolling downhill through rows of vines kept deliberately tall to prevent roe deer from nibbling the greenery.

He pauses to point out another sunlit Bolney vineyard that rolls out toward a distant ridgeline known as the South Downs. The view alone would win awards if it could be bottled and sold.

“But this isn’t just hobby winemaking,” he clarifies. “We’re a professional producer and we’re winning awards.”

Which sounds like a perfectly good excuse to crack open the bubbly.