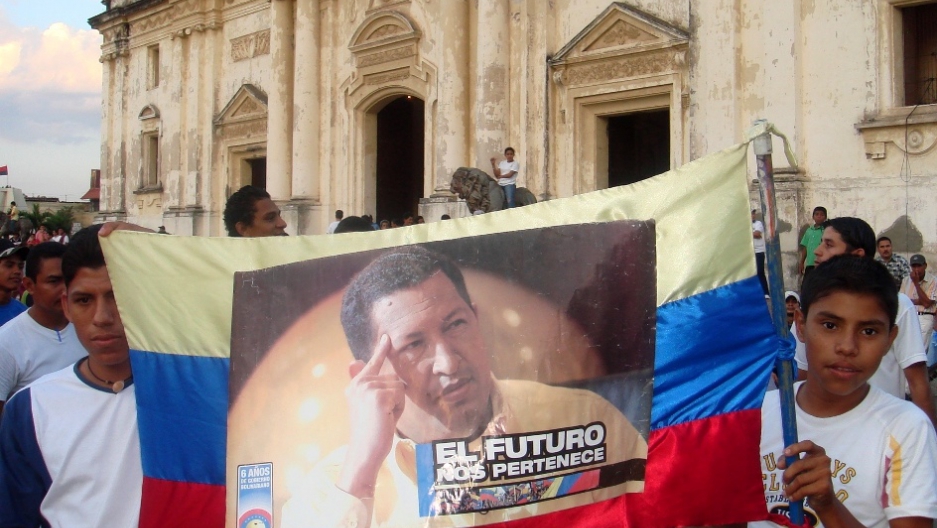 Editor’s note: This is an updated version of an Oct. 6 article entitled "Could Nicaragua's president survive a Chavez loss?"

President Ortega and his Sandinista party’s politburo, recipients of more than $2.2 billion in Venezuelan petrodollars since 2007, were confident their Venezuelan benefactor would win re-election in October. And Chavez delivered: He tacked on another six years to his 14-year tenure.

But that hasn’t dispelled doubts about the continued rule of the convalescing Venezuelan strongman. As Chavez’s mysterious cancer-treatment trips to Cuba resumed this week, beneficiaries like Ortega can only hope his flights to Havana are round-trip.

Bayardo Arce, President Ortega’s top economic adviser, says the Sandinistas will be grateful for Venezuelan largesse “as long as it lasts.”

But Arce, who was among the comandantes who led the revolutionary government of the 1980s, says the government is working to diversify its economic relations with China, Europe and the United States because “We have to anticipate that ALBA is not going to be permanent.”

By ALBA, he meant the Bolivarian Alliance for Our Americas (ALBA), a bloc of eight left-leaning Latin American countries underwritten by Chavez.

Since Ortega returned to power democratically in 2007, the wellspring of ALBA aid has provided the Sandinista government with an average of $500 million per year in loans, donations and oil credits. In 2011, Ortega’s ALBA allowance jumped to $609 million during his own re-election campaign.

Six years on, the inner workings of ALBA in Nicaragua remain a mystery to all but a select coterie. That’s because Ortega’s inner circle of family members and confidants has privatized Venezuelan aid through a web of businesses linked to a main holding company called “ALBANISA,” short for ALBA of Nicaragua, S.A.

“There is nothing transparent about any of this; they are operating completely on the fringes of government,” says opposition lawmaker Carlos Langrand, who has been studying ALBA based on the information provided to the congressional economic and budget commission.

His predecessors have been equally perplexed. Francisco Aguirre, former president of the economic and budget commission, described ALBA as “a riddle, wrapped in a mystery, inside an enigma,” quoting Winston Churchill’s description of Russia in 1939.

ALBA is secretive by design. No Venezuelan money passes through Nicaragua’s state coffers or any other auditable channels subject to third-party oversight or regulation. The International Monetary Fund (IMF) and Nicaragua’s increasingly feckless opposition have repeatedly implored the Ortega government to open the books on ALBANISA, but they say the most anyone has gotten is a peepshow glimpse that leaves most of the details to the imagination.

What’s known, from a superficial report the central bank provided begrudgingly at the repeated behest of the IMF, is 80 percent of the $2.2 billion reported through 2011 is registered as loans and concessionary oil credits that need to be repaid within the next 25 years.

It is a matter of endless speculation in Nicaragua about who will be left holding the bag. Opposition lawmakers insist none of the Venezuelan debt is the state’s responsibility, but they have recently raised concern that ALBANISA, through a series of emergency loans to cash-strapped state institutions, is foisting its private debt onto the state. Arce insists that concern is unfounded.

The influx of petrodollars into Nicaragua has created a new group of Sandinista economic elite, the “ALBAgarchs,” as it were. The Sandinistas have used their newfound riches to corner the country’s petroleum market and invest heavily in media, tourism, agriculture, timber, and renewable energy. New car sales are at an all-time high, construction is up and the banks have more money than ever.

Indeed, there’s so much new money in Nicaragua that the Sandinistas are starting to indulge in stargazing.

Earlier this year, the president’s son, Laureano Ortega-Murillo, announced the Sandinistas’ plans to buy a $300 million satellite from China, as part of Nicaragua’s recent courting of Chinese investment. Nicaragua could effectively win Central America’s space race before any of the other countries even make it to the starting blocks.

“It’s time for us to be first in something,” Arce says.

The government is also seeking foreign investors for a series of lofty megaprojects: a $500 million deepwater port on the Caribbean; a $6.6 billion pipeline and oil refinery on the Pacific; and a $30 billion inter-oceanic canal — a project the Sandinistas recently entrusted to a Chinese telecom magnate.

If the Sandinista vanguard seems to be spending lavishly these days, it’s because they have a lot to spend. According to calculations by Congressman Langrand, the earnings from their ALBA oil business netted them $1.86 billion in just the past five years. Those profits continue to grow every time a Nicaraguan goes to the gas pump to fill up the tank at $5.30 a gallon — the highest gas prices in Central America.

With money to burn — which ALBANISA is quite literally doing, having installed 11 thermal energy plants in Nicaragua over the past five years — the new masters of the economy can also afford to be generous with “el pueblo” — the people.

The Ortega government has used ALBA oil proceeds to provide zinc roofing materials and property titles to hundreds of thousands of impoverished Nicaraguan families. The government has given micro-credit loans to more than 683,000 borrowers, agricultural assistance to more than 100,000 farmers, and scholarships to 120,000 students. ALBA also subsidizes electricity bills for low-income Nicaraguan households and public transportation costs through gas subsidies for buses and taxi drivers.

In addition, the Bolivarian Alliance forks over $59 million a year to cover the government’s so-called “Christian, Socialist and Solidarity” monthly cash bonuses for state employees, according to a study by private economic consulting firm COPADES. Nicaragua's state-owned media puts the number of functionaries on the bonus list at 165,943.

It’s not a raise, but a gift “thanks to Comandante Ortega,” as the Sandinista media is wont to remind its viewers each month as they broadcast images of state workers queuing outside banks for their handouts.

By managing ALBA money privately, rather than as runaway public spending, Nicaragua has also maintained macroeconomic stability, keeping the IMF and the business sector happy. It’s an unorthodox model, but it’s an unorthodox government for an unorthodox country. And so far, it appears to be working. Nicaragua has averaged 4.6 percent economic growth over the past two years, and attracted an eye-popping 91 percent increase in foreign direct investment last year. Nicaragua’s economy is on track to grow at 5 percent for the next two years, according to projections released this week by the Economic Commission for Latin America and the Caribbean (ECLAC).

“All of Nicaragua’s macroeconomic indicators are excellent. And why? We have to admit it, it’s because of Venezuelan financial assistance,” said independent economist Nestor Avendano.

(Despite its growth, Nicaragua is still the second-poorest country in the Americas, behind Haiti.)

Is ALBA just business as usual?

The million-dollar question is, What will happen to ALBA and Nicaragua’s economy if Chavez is no longer in power?

Maybe not much. First, if Chavez's poor health forces him to step down, analysts expect Vice President Nicolas Maduro will remain faithful to his Bolivarian movement.

"We will be loyal to Chavez beyond this lifetime," Maduro said in tearful remarks this week, Reuters reported. "We are the children of Chavez."

But the opposition, which in October garnered its best election results against Chavez yet, will be scrambling to unseat Maduro in possible early elections.

On the campaign trail, the opposition's presidential candidate Henrique Capriles said the country must review all of its oil deals under ALBA — especially Chavez’s neediest allies, Cuba and Nicaragua — and should no longer use Venezuela’s natural resources to “buy our friends.”

Yet according to official figures, Nicaragua is a paying customer, not a welfare recipient. Of the $609 million in ALBA aid that entered Nicaragua last year, $557 million was in oil credits to be repaid in 25 years, $7 million was in private sector loans, and $45 million was in foreign direct investment, according to the central bank. That leaves a grand total of $0 in donations, charity or gifts. If that’s true, then a post-Chavez Venezuelan government may choose to continue business as usual.

In fact, Venezuela has not given a single petropenny to Nicaragua since 2009, according to the central bank’s figures. Over the past three years, ALBA has evolved almost entirely into a private-sector business venture.

Behind the socialist window dressing, the numbers — at least those made available — clearly show ALBA is not a charitable operation, rather a business arrangement with a twist of social responsibility.

A look at Nicaragua’s export data from 2006 and 2011 offers additional insight into the alliance’s private commercial nature. In 2006, a year before Ortega’s return to power, Nicaragua shipped only $2 million worth of agricultural products to Venezuela. Last year, Nicaragua exported more than $300 million worth there, according to the Central American Secretary of Economic Integration. That’s a 150-fold increase in exports in five years, good enough to move Venezuela from 29th to second on Nicaragua’s list of trade partners. Nicaragua’s imports from the South American oil power have grown sevenfold during the same time period.

Venezuela would have a hard time uprooting ALBA, and little reason to try. It couldn’t cut off its “charity” for Nicaragua, because Chavez already has. And further attempts to undo the alliance would mean adopting a stance against trade or risking default on Nicaragua’s oil credit.

“No government can change overnight the relationship between two countries,” Arce says. “In campaigns, people can say anything they want, but I don’t see any new government doing anything crazy.”

This is part of GlobalPost's in-depth series “Nicaragua Rewind,” a look at whether the Central American country is repeating its troubled past under the second coming of Sandinista President Daniel Ortega. It is presented in partnership with the Pulitzer Center on Crisis Reporting.