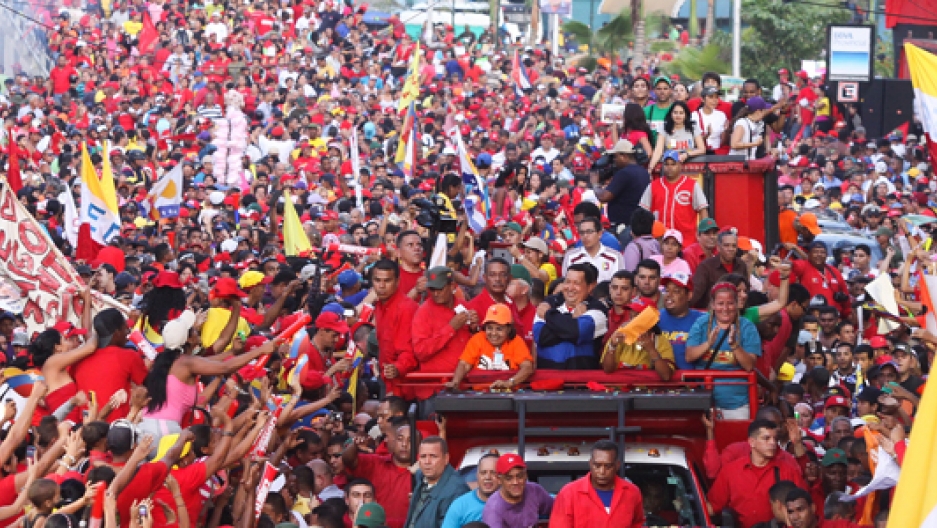 Share
Venezuela is holding a presidential election on Sunday and several polls place opposition leader Henrique Capriles within striking distance of President Hugo Chavez. That may be because increasing numbers of Venezuelans say after 14 years in power, Chavez's left-wing government is corrupt and incompetent. Chavez sang patriotic songs during his final campaign rally before a massive crowd in Caracas on Thursday. He's been known to give five-hour speeches. But Chavez is suffering from cancer and took the stage amid a nasty rainstorm so he kept his remarks relatively short. Still, he offered a stirring defense of his socialist revolution, which has been financed by oil profits. He said massive government spending on health, education and nutrition programs had cut poverty in half. He also promised that if he wins another six-year term he would eliminate both poverty and unemployment. Still, a growing number of Venezuelans has soured on the Chavez revolution. While the president has vastly expanded the federal government's powers, it has failed to do much about everyday concerns, like rampant street crime, high inflation and power outages. The western city of San Cristobal, an opposition stronghold, sits so far from Caracas that it's long been ignored by politicians. In fact, the government's cavalier response to a collapsed bridge helped push some city residents into the Capriles camp. Four years ago, Chavez transferred bridge maintenance from the states to the federal government. Despite warnings that the San Cristobal bridge had been damaged by a flood, there was no response from Caracas and the bridge buckled in April. Government crews are now repairing the span, but the resulting traffic jams are so bad that salesmen do brisk business hawking ice cream to exasperated motorists. Government inefficiency is one reason the construction industry is moving at half speed, according to Max Vasquez, an architect who is building an office complex in San Cristobal. He says that before breaking ground, he had to spend three years securing 42 separate building and environmental permits. Along the way, he was constantly pressed for bribes. Then, the government nationalized the local cement company, which led to cement shortages. "There's been delays in finding cement and sometimes finding steel. Sometimes you can't find it and you have to wait until the shipment arrives in the city," Vasquez said. All this mean that a project that would normally take two years has gone on for five years, with no end in sight. "It could be finished in maybe eight months, or maybe five years," he said. Growing frustrations have provided the first realistic chance for the opposition to defeat Chavez. Capriles is only 40, but he's already served as mayor of a Caracas suburb, governor and president of the National Congress. His youthful vigor provides a sharp contrast to the sick and aging president. Plus, Capriles has never lost an election. Capriles pledges to maintain some of the health and education programs that have been the key to Chavez's staying power. But rather than an ideological firebrand, Capriles presents himself as a pragmatic problem solver. He's also promises to tackle issue Chavez has ignored, like steep drops in oil and food production. "I know that today the immense majority of Venezuelans are dissatisfied. And I know that the immense majority of Venezuelans know that we can be do better." Although Chavez easily won the last three elections, the political landscape is shifting. In 2010, opposition candidates received half of all the votes cast in the congressional elections. But at Chavez campaign headquarters in San Cristobal, the president's supporters warn against reading too much into those results. Chavez himself has always proved to be an electoral juggernaut and though the polls have tightened, most surveys still show him in the lead.