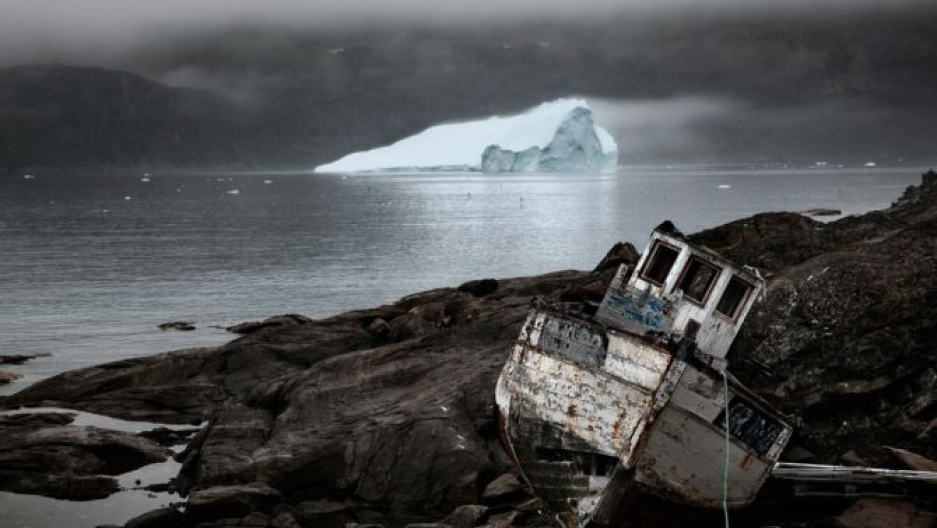 A glacier is seen off the coast of Kraushavn, Greenland, July 22, 2012. Kraushavn sits at the beginning of the Northwest Passage, a sea route through the Arctic Ocean, which connects the Atlantic and Pacific Oceans. (Stefano De Luigi/VII/GlobalPost)
Credit: Stefano De Luigi
Share

BARROW, Alaska – There is a battle at the top of the world for oil and minerals, and many observers of this competition in the Arctic believe the United States is lagging far behind.

“In some ways, we’re not even in the race,” said Alaska’s Lt. Governor Mead Treadwell.

“If we’re not there, it is up to the Russians and the Canadians to set the rules. If we’re not more aggressive in the Arctic, we’re missing the boat,” he added in an interview with GlobalPost.

At stake are what economists predict could be trillions of dollars in profit in the coming decades, not only for the oil companies but also in the form of revenue for the state and the small villages and towns of native populations that stand to benefit. And, as Treadwell points out, there are lots of jobs in Alaska and elsewhere that come with those profits as well.

There is also a gain to be had in global diplomacy, a chance for the Arctic nations to work together or risk splintering into hostility. And, of course, there is the fate of a delicate ecosystem that the planet needs to stay cool amid the perils of global warming.

Despite the extraordinary opportunity – and peril – that the Arctic represents, there are many leaders in business, government and the environment who throw up their hands in frustration at the failure of successive American administrations – Republican and Democrat – to understand the Arctic’s potential.

Iceland’s President Olafur Grimsson, with silver hair and a well-tailored suit, has worked tirelessly to develop the Arctic Council as a strong international body that can work together productively and someday have the weight and clout of other major international alliances, such as NATO and ASEAN.

Speaking before the Arctic Imperative Summit in Girdwood, Alaska in late August, Grimsson was openly frustrated about the failure of the United States to see the potential in the Arctic for nations to come together to protect the environment and create a responsible climate for investments in tapping much-needed oil and natural gas reserves. The Chinese and the Russians, he said, are way ahead of the US in understanding this and moving to secure deals in the other Arctic nations, including his own.

“It will take a long time and great effort for the US to become as active is China is now in the Arctic. To be as active as Russia will take even longer time. I don’t know how to move Washington further on this issue.”

“I don’t see how the US is going to conduct a comprehensive foreign policy without being a leader of the Arctic,” he added.

The historic melting of the Arctic, which is widely viewed to be caused by global warming, has unlocked shipping lanes and opened up the potential for tapping huge oil reserves that lie beneath the floor of the Arctic Ocean.

Yet, right now there is not a single deep-water port from Dutch Harbor to Barrow that can handle large freight and oil vessels. Russia and Canada and virtually all of the nations of the Arctic Council except the US have prepared their ports for the coming increase in activity.

The US Coast Guard is not equipped to handle the surge in shipping and oil exploration and openly concedes it is not adequately prepared to respond in the event of a catastrophic oil spill like the 2010 Deepwater Horizon blowout. The Coast Guard also concedes that it has only one ice cutter, which is old and in need of repair, compared to Russia which has 20 ice breakers to assist ships passing through these waters.

Rear Admiral Thomas Ostebo, commander of the 17th District of the Coast Guard, said, “It’s a real time problem for the people of the Arctic. We don’t control it, and we are late to the table. When I look at the Arctic strategically, I see a host of decisions that need to be made today.”

“We are leaning forward operationally. But on a tactical level, I lose a lot of sleep,” he added.

The number of ships moving through the Arctic waters in his district on this day in August was more than 95, a tripling of sea traffic compared to last year.

“It is spinning a little bit out of control,” he said.

Part of the problem, he said, is that “the US has to look at the Arctic not as a cost sink, but an investment.”

“Ready or not, America, here comes the Arctic,” he said.

The United States is one of the only industrialized countries in the world that is not a signatory to the Law of the Sea Treaty.

The resistance to signing the treaty, which observers say is largely pushed by a small, far-right group of Republican skeptics of all international treaties and which has also suffered from indifference by Democrats, has become a prominent example of the political dysfunction in Washington. It has been brought before the Senate for hearings, amendments made, but for nearly 20 years it has foundered in Congress. This despite the fact that it is supported by a coalition of the military, including the commandant of the US Coast Guard, business interests, including leaders in oil and shipping, and a host of environmental lobbyists.

Chairman of the Senate Foreign Relations Committee, Sen. John Kerry, has led the effort to support the treaty and has vowed to bring ratification to a vote after the heated, partisan politics of the presidential election.

“Many investors will be uncertain about investment here until the Law of the Sea Treaty is ratified,” said David Rubenstein, co-founder of The Caryle Group, a powerful investment firm stacked with leaders of government and military.

Rubenstein believes the Arctic is one of “the last emerging markets” in the world. But he said the US is thwarted by the lack of a strategy in Washington to develop the Arctic.

Scott Minerd, chief investment officer at Guggenheim Partners, one of the largest private investment firms in the United States, said, “It’s already true that we are falling dramatically behind… Someone needs to start articulating that there is a crisis in the Arctic.”

For some of these critics Washington bureaucrats are the enemy. David Hayes, deputy secretary of the US Department of the Interior, is aware of that. But he has worked tirelessly for years within the behemoth of Interior, which has a sprawling mandate that includes managing more than 200 million acres of Alaska, about half the state. He conceded that federal officials had been “tripping over each other” in Alaska for a long time, but he also countered that the department has to balance the environmental issues with business interests.

“We must balance conservation and development,” he said.