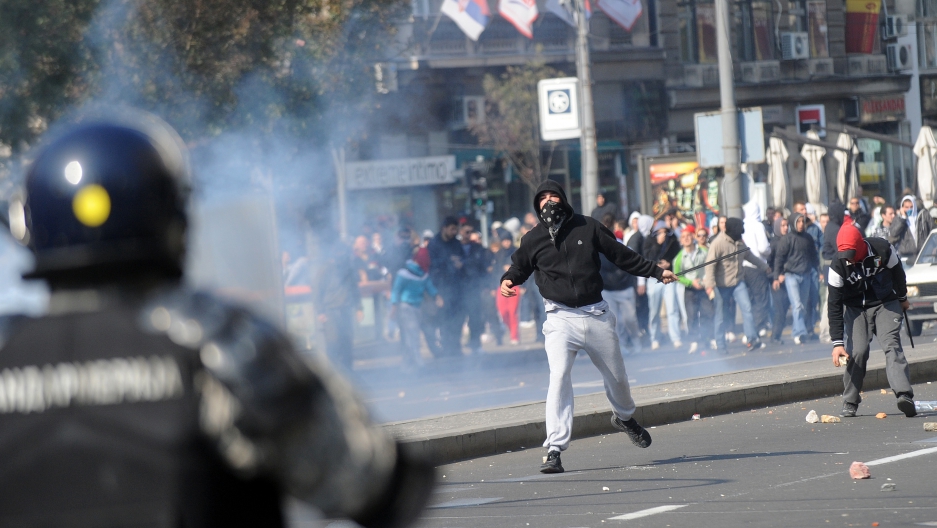 BELGRADE, Serbia — The authorities have banned a gay pride parade planned for Saturday along with all other public gatherings this weekend connected to this week's Pride Week.

Previous parades have also been banned for security reasons, but there are concerns this year that a new nationalist-led government will backtrack on recent reforms aimed at tackling discrimination in a society where homophobia is prevalent and violence common.

Although Serbia has become a democracy since the authoritarian Slobodan Milosevic was ousted in 2000, gay Serbs say there's hardly more tolerance today.

Aleksandar Skundric, a 28-year-old gay Belgrade native, says he was beaten and harassed as a child. “I learned what roads not to take, literally and figuratively," he said. “And I still feel like a stranger in this society.

More from GlobalPost: Defeat may mean victory for Georgian president

Last month, six young men beat a 25-year-old gay man outside a nightclub here with a hammer. He suffered a jaw fracture and head contusions.

The LGBT community hoped to draw attention to such crimes this week by staging a series of performances and debates set to culminate with a Pride Parade on Saturday.

But gay activists are facing an uphill battle against the country’s conservative leaders and large segments of the population in a society where nationalism and Orthodox Christianity dominate public discourse.

Previous pride parades have a turbulent history. The first one in 2001 prompted street violence and dozens of injuries.

“We were naive,” Skundric recalls. “We thought we had achieved democracy.”

The authorities canceled pride parades in 2009 and last year for security reasons. The only “successful” parade took place in 2010, when attention focused on clashes between police and thousands of anti-gay rioters.

“The impression the general public got from the media was that the LGBT community is quite well protected,” said Srecko Sekeljic of the Institute for Sustainable Communities. “But the cops were there because otherwise we would have been killed.”

A member of the advisory committee for the aborted 2009 parade, Sekeljic witnessed thousands of riot police fending off mobs of anti-gay rioters the following year.

“They were very well organized and trained in urban combat tactics,” he said.

Although organizers this year worked with the government and security forces to prepare for possible attacks and counter-demonstrations, many in the LGBT community believe the government should be doing more.

“The state isn’t doing enough to educate, to take a stand,” Skundric says.

Others say officials are obstructing reform. “A lot of politicians said they were eager to take the ‘blame’ for canceling the pride parade,” said Sekeljic about the 2011 parade.

However, they have been partly constrained by Serbia’s drive to join the European Union, one of the country’s main priorities. The government must show itself to be better protecting human rights, including LGBT rights, to qualify.

Some progress was made in that under former Prime Minister Boris Tadic. The government passed an anti-discrimination law in 2009 that included provisions against bias on the basis of sexual orientation. It also created an independent ombudsman’s office and named a commissioner for equality.

But members of the LGBT community say the new laws have done little to change their everyday lives. “Those institutions are pretty young, the law is pretty new,” Sekeljic says. “The procedures must become more efficient.”

This week's events were partly aimed at addressing the need by demanding that hate crimes be criminalized, among other measures.

But activists worry the recent progress is grinding to a halt under a new government headed by former nationalists.

President Tomislav Nikolic was a leading member of the ultra right-wing Serbian Radical Party until he broke away to form the Serbian Progressive Party. Prime Minister Ivica Dacic is best remembered as Milosevic’s spokesman during the 1990s.

Although both have renounced their former stances and vowed to move Serbia closer to the West, many believe they’re posturing.

“They’re opportunists,” Sekeljic says. “They don’t express support for human rights, and gay rights in particular, in their day-to-day politics.”

LGBT community members had hoped the parade would do something to improve their lives nevertheless.

“People just want to show creativity, happiness and joy,” said Boban Stojanovic, a Belgrade Pride organizer. “Their emotions can help create a revolution that leads to a better world.”