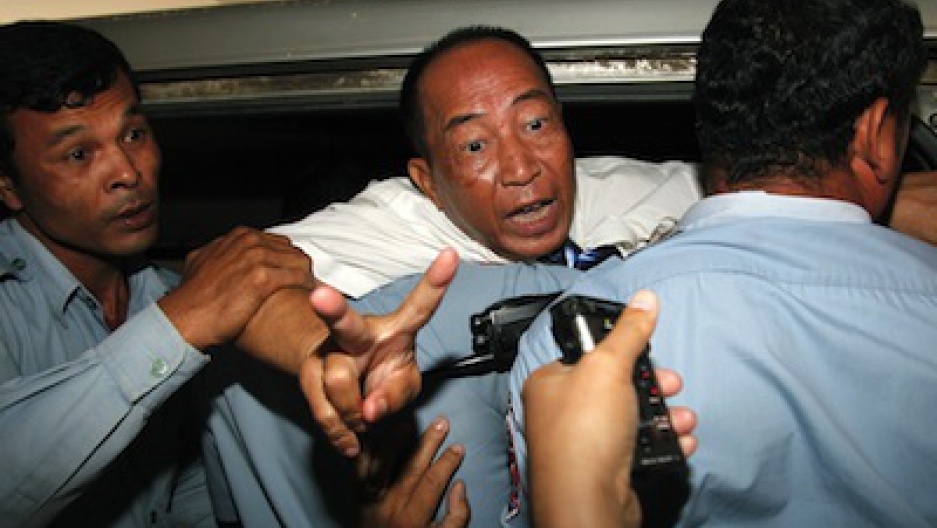 Mam Sonando (C), owner of an independent radio station, is escorted by cops into a car after his verdict at the Phnom Penh municipal court on October 1, 2012. The prominent critic of Cambodia's government was sentenced to 20 years in prison for an alleged secessionist plot. (TANG CHHIN SOTHY)
Credit: STR
Share

The Cambodian village of Prama appears to be a fairly destitute, 1,000-family hamlet in a province bordering Vietnam.

Were it to establish an independent state, it would likely become the tiniest, least defendable nations on the planet.

There is scant evidence that anyone in the village had such absurd intentions. They created no snazzy new flags, no rebel militias, no independent political wing.

That hasn't stopped Cambodia's premier, Hun Sen, from insisting that villagers harbored a plot to establish an "autonomous zone," the Phnom Penh Post reports. One of the harshest sentences has fallen upon a prominent activist and radio DJ, 71-year-old Mam Sonando, who this week received 20 years in prison for devising this nefarious plot.

It just so happen that, in May, a wave of troops and police descended on the same village firing assault rifles. Their goal, VOA reports, was clearing land for a tycoon's rubber plantation. One 14-year-old girl was killed.

Resisting a forced incursion by the state -- rather than endeavoring to establish a new state -- was the true cause of Sonando and his peers, according to Human Rights Watch. The group's Asia director, Brad Adams, contends that “no credible evidence of a secessionist movement or of Sonando’s involvement was produced at the Phnom Penh court, yet it handed down these incredibly harsh sentences anyway."