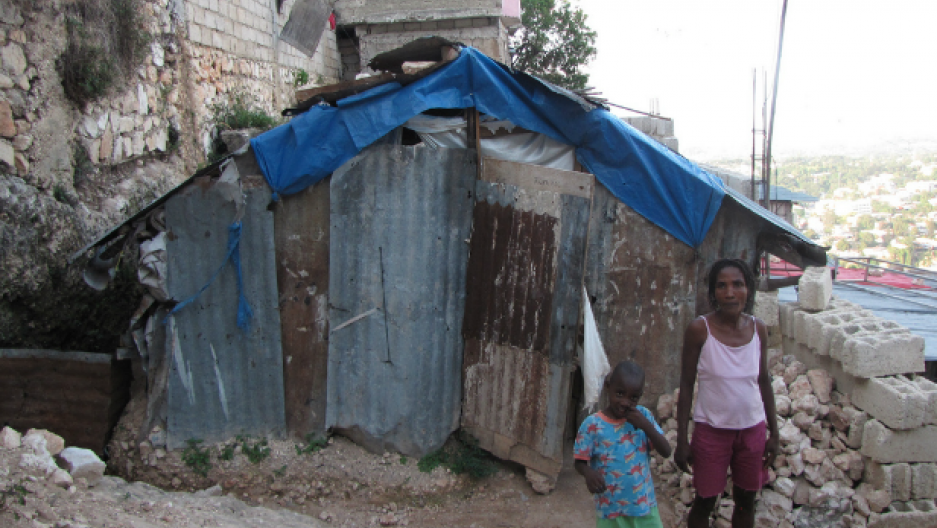 When the earthquake hit Haiti in January 2010, many in the impoverished country lost what little they had.

Nearly three years later, about 400,000 remain homeless. Many are still living in tent camps. And they’re at risk of eviction.

But these days, there’s some push-back.

On a recent Sunday morning outside of Port-au-Prince, impeccably dressed men, women and children filed into the huge Grace Church. Across the lawn, a corrugated metal fence hides a different scene — several hundred tents and makeshift shelters.

This is Grace Village camp. No one attends the church next door.

They’re angry about the horrible conditions here. They’re especially angry at the landlord, the church pastor, who’s been trying to force them off his property.

A church representative says they’re just evicting trouble-makers and trying to help those with some means relocate.

But many camp residents say the pastor and his associates are using sinister tactics.

Frantsy Alexandre emerged from a tent with a large manila envelope. He pulled out an x-ray of his torso and a signed letter on medical stationery.

“The camp manager was going to destroy my neighbor’s tent, so I said, ‘You can’t do that’ and blocked his way," he said. "He came back with a security guard and beat me with a baton. I went to the police but they ignored me.”

So Alexandre went to the courthouse, where they told him to document his injuries.

“I talked to an evicted camp resident who’s been fighting this kind of abuse,” he said, “and he said we need to report what happens to the attorney.”

Enter Patrice Florvilus. After the earthquake, the attorney formed an organization that represents residents of tent camps who’ve been threatened with eviction.

“Our strategy is to stop evictions by making landlords follow the law, which can mean a lengthy legal process. And that’s what the landlord wants to avoid,” Florvilus said.

It doesn’t always work, but a legal defeat can sometimes turn into a de facto victory. In one case, the mayor of Delmas ordered families off government land. A court upheld the eviction order. But then the mayor backed off — locals say because of organized opposition.

But there are many failures as well.

Jackson Doliscar, a community organizer, says getting people to believe in the power of grassroots activism has been a major challenge. In 1990, when Jean-Bertrand Aristide was elected president, he encouraged Haitians to organize for change. But the hoped-for improvements didn’t materialize. Doliscar thinks that people in Haiti today are desperate enough to try again.

After the earthquake, Doliscar’s grassroots group joined forces with 25 others to form a housing rights coalition. One of their projects is a slum called Jalousie. It’s in a precarious spot on a hillside overlooking the city.

This summer, the government ordered residents to evacuate.

Government officials deny they ever planned to force Jalousie residents from their homes. They have been encouraging hundreds to leave in exchange for money to relocate. But many fear being homeless again after spending more than a year living in the streets after the earthquake.

Marie Michel Moise lived in a tent in a city park with her young children for more than two years. She says she finally got funds to move into a tin shack in Jalousie, the only neighborhood she could afford. She laughed when asked where she would live if she had the choice.

And yet Moise says she believes people can make a difference by taking to the streets and pressuring the government. But she’s not afraid she’ll be forced to leave.

“We had a demonstration, and they said they wouldn’t destroy our homes," she said.

But things aren’t quite that easy. Even some supporters of Haiti’s housing rights movement say popular protests are no silver bullet.

Alexis Erkert, who works with Other Worlds, an organization of women that supports grassroots groups around the globe, says Haitian authorities often dismiss the activists.

“Last time they did have a sit-in, they managed to get a meeting with (a Ministry of Social Affairs staff member),” she said. “But then they asked for an email address or phone number for follow-up, and they were just laughed at and kicked out.”

She doesn't think the movement can succeed without the support of the international community..

In other words, If Haitian officials won’t listen to Port-au-Prince’s poorest, they might pay attention to their overseas allies — at least those in donor countries.