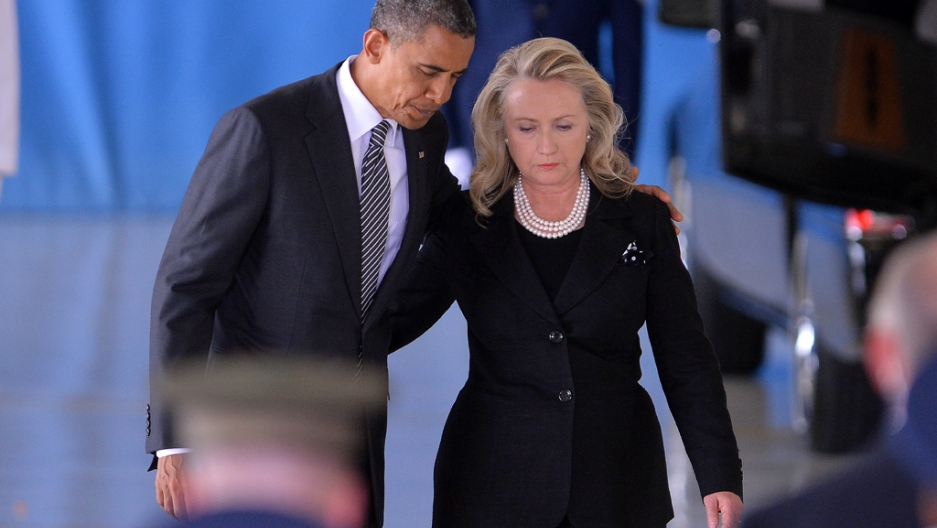 US President Barack Obama and State Secretary Hillary Clinton return to their seats after speaking during the transfer of remains ceremony marking the return to the US of the remains of the four Americans killed in an attack this week in Benghazi, Libya, at the Andrews Air Force Base in Maryland on September 14, 2012.
Credit: JEWEL SAMAD
Share

House Republican leaders claim to have information that Obama administration officials denied repeated requests for higher security at the Benghazi, Libya consulate, where Ambassador Christopher Stevens and three others perished during an attack last month.

In a letter addressed to US Secretary of State Hillary Clinton, to which The New York Times provided a link, representatives Darrell Issa (R-Ca) and Jason Chaffetz (R-Ut) wrote: "...Prior to the September 11 attack, the US mission in Libya made repeated requests for increased security in Benghazi. The mission in Libya, however, was denied these resources by officials in Washington."

Issa chairs the House Committee on Oversight and Government Reform, which has been investigating the Libya attack, while Chaffetz is the chairman of the subcommittee on foreign operations. A hearing on the oversight committee's findings is planned for Oct. 10.

Their letter additionally denied suggestions that the attack on the consulate in Libya was the result of protest similar to other anti-US demonstrations across the Middle East and North Africa.

"It was clearly never, as Administration officials once insisted, the result of a popular protest," the letter said. The Obama administration has since characterized the assault on the Benghazi consulate as a terrorist attack.

The Associated Press reported that the State Department has not yet answered questions about whether consular officials had indeed sought extra security in advance of the attack.

"Her response is going to be relatively succinct today, expressing her complete commitment and this building's commitment to work with the congress to get fully to the bottom of this. But I don't anticipate she'll be able to answer the specific questions today" Nuland said, according to CNN.

The nature of the attack on the US consulate has been a source of contention between the Obama administration and Republican politicians. Some Republicans claim that the White House has tried to downplay a threat that heavier monitoring might have prevented.