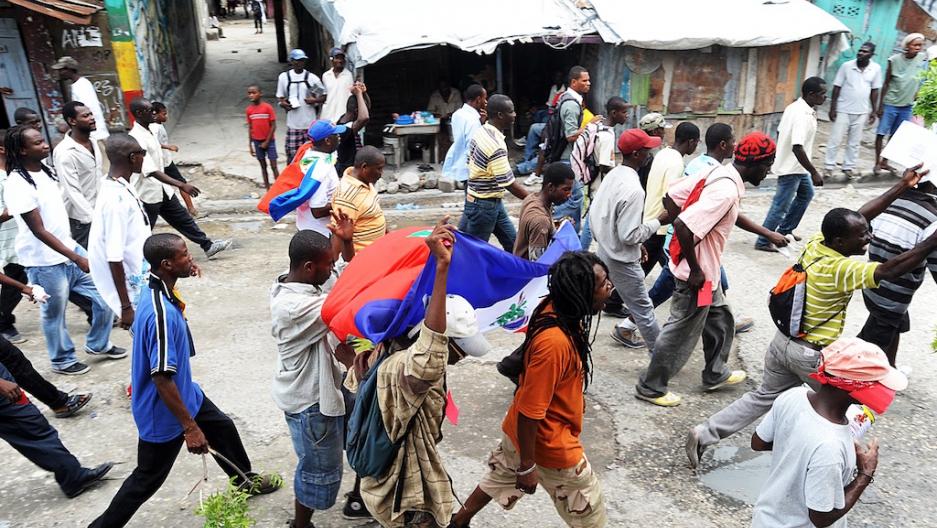 Haitians protest against the government and the cost of living on September 30, 2012 in Port-au-Prince. The next day, a protest to demand better housing opportunities was cancelled because of alleged government intimidation of people living in tent cities.
Credit: THONY BELIZAIRE
Share

Hundreds of thousands of people are still living in tent camps in Haiti, more than two years after an earthquake leveled most of the housing in the country, and frustration is running higher than ever over the government's inefficiency and less-than-stellar money management.

For World Habitat Day on Monday, a protest was organized by the Collective to Defend the Right to Housing against the lack of available and sustainable housing was planned from one of the tent cities, Camp KID, to downtown Port-au-Prince.

However, that march was cancelled yesterday after fearful camp residents began to report getting phone calls threatening them if they participated. It's unknown if the intimidation tactics were on behalf of the government or another entity, but they worked.

Alexis Erkert is an American coordinator for Other Worlds, an organization that's part of a coalition of international organizations acting in solidarity with the right to housing movement in Haiti. The Under Tents campaign is part of the coalition's plan to get international attention on the situation, and Under Tents has a petition signed by over 2,000 people demanding "the Haitian Government immediately halt all forced evictions until public or affordable housing is made available."

She says fear and fatigue run high in the camps, and residents are consistently faced with the prospect of forced evictions, but have nowhere else to go.

Erkert told GlobalPost yesterday via email that yesterday's protest was being organized by a number of camps, but that "a number of camp residents reported receiving threatening phone calls and thugs coming to the camps telling people not to participate in the protest. There was enough fear that they decided to hold off."

Over the past two years, the government has promised housing for those without it, has come up initiative after initiative, and receiving and squandered millions of dollars in foreign aid, but have not made any notable progress finding permanent homes for those who have gone years without.

"More and more camps are evicted with no housing plan in place, without viable options for the future," said Erkert. "They have no access to the government, and limited access to the media. It makes me deeply sad that today they were stripped of one of the only means available to them to make their voices heard."

Housing isn't the only thing Haitians are protesting, however. On Sunday, thousands marched against President Michel Martelly and his government, citing corruption, the high cost of living and broken promises.

"The president has made so many promises but nothing has become a reality," protester Max Dorlien said to the Associated Press. "It's only a clique of his friends who are making money."

Martelly is also accused of not doing enough to curb the housing crisis, despite his "16/6" project, an idea that was supposed to relocate people currently living in six camps, from 16 Port-au-Prince neighborhoods, into affordable rental spaces. This hasn't happened.

Yesterday's march was slated to begin in the Christ-Roi camp, which is one of the areas allegedly under the 16/6 plan. The indignation and depression are palpable there.

"There is growing dissatisfaction across the board with lack of governmental action in providing basic services and meeting basic needs," said Erkert.

Direct action and protest are some of the only means the people have to express their frustration. After an earthquake, a cholera outbreak, and untold other horror stories, some Haitian people have nothing left but to protest.

As the housing rights movement is gaining traction, organizers like the Collective have begun grassroots actions like the one planned for yesterday's World Habitat Day.

"When faced with the housing problems in this country, Haitian society cannot sit back with its arms crossed," said the declaration from the Collective about its protest yesterday. "We must struggle for an alternative plan, one that will construct a country in which the right to housing is guaranteed, because this right is also connected to [other] issues" such as employment, education, healthcare, electricity, transportation, communication, and labor conditions.

For more of GlobalPost's reporting on Haiti, check out our Special Report "Fault Line: Aid, Politics and Blame in Post-Quake Haiti."

Correction: This story incorrectly stated that Erkert and Other Worlds were coordinators of Monday's protests and has been changed.