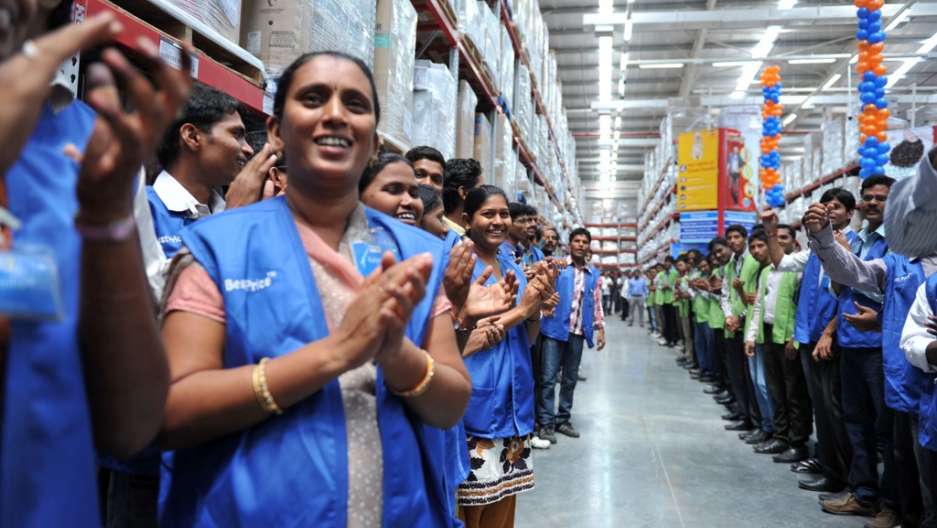 Walmart is hardly known for creating quality jobs in America, where it has been criticized for its labor practices. But in India the government hopes the retail giant--and others like France's Carrefour and the UK's Tesco--will help increase farm incomes, boost agricultural production, and create vital non-farm jobs that will help bring a million more Indians a step closer to the middle class.

In case you're wondering, the move is about as controversial here as American companies' outsourcing of work to India.

As this week's Economist points out, Gandhi's legacy saddled India with an idealized view of poverty and a disastrous commitment to small cottage industries until then finance minister Manmohan Singh unshackled its economy in 1991 (See my piece for GlobalPost "Did Gandhi kill India Inc?" for more on that). But many believe that there's a lot further to go.

"Indian policy still discourages foreign investment and discriminates in favour of small, inefficient firms and against large, efficient ones," the Economist argues. "The state controls too much of the economy and subsidies distort prices. The damage is felt in both the private and the public sectors. Although India’s service industries employ millions of skilled people, the country has failed to create the vast manufacturing base that in China has drawn unskilled workers into the productive economy. Corruption in the public sector acts as a drag on business, while the state fails to fulfil basic functions in health and education. Many more people are therefore condemned to poverty in India than in China, and their prospects are deteriorating with India’s economic outlook. Growth is falling and inflation and the government’s deficit are rising."

Allowing retailers like Walmart into the market is the government's idea for the next big move. But the evidence is unclear about whether it will spark the same kind of revolution as opening up the automobile sector has done for companies like Tata Motors -- today lauded elsewhere in the Economist for reviving Jaguar with the new F-type revealed at the Paris Auto Show.

A sprinkling of articles from India lay out the risks.

Walmart didn't make a dent in Germany, Padma Rao Sundarji writes for Outlook. So hopes that it and companies like it will create a million new jobs here may be overblown.

"Walmart’s stores were mostly situated away from big cities," she writes. "The idea of driving out after a hard day’s work and walking long aisles in search of dinner amidst lawnmowers and washing machines turned Germans off. For that matter, there is a German retailer at every street corner. These competitively priced stores cover 90 per cent of the consumers’ daily needs. Even their cheapest sections do not compromise on quality."

Some of those conditions are true in India, too.

Meanwhile, in Thailand, Indian fears that "big retail" will drive out mom-and-pop stores have been realized, writes Outlook's Sriram Natrajan, though it was 7-Eleven, not Walmart, that did the damage.

When big retailers like Walmart and Tesco first came into Thailand, they “breached the fragile competitive balance that existed in Thailand between traditional retailers and wholesalers, with unfair methods like predatory pricing, exclusive dealing and resale price maintenance," the magazine quotes Roi Bak, an advocate, who works in fair competition, as saying.

After new legislation limited how far the giants could go, the battle shifted, however.

"The threat to old stores comes not directly from big supermarkets, but from a proliferation of the smaller convenience store found in almost every Bangkok soi: like 7-Eleven, the Japanese-owned chain whose Thai patent is held by local giant, CP Group," according to the magazine. "These cater to almost every daily household need, dairy items, baked products, confectioneries, newspapers, cosmetics, tobacco, alcohol, what have you. A large proportion are franchises, not independently owned; just the smaller end of modern retail, conducted and completely controlled by larger chains. There are some 6,500 “Sevens” in Thailand, half in Bangkok. A massive expansion of this format is occurring due to legal limitations on the hypermarket format. Tesco Lotus is focusing on the smaller express format to circumvent these."

What could happen in India?

Proponents say contract farmers for Pepsi make more money than the guys selling produce on the open market, and the entrance of big retail could spread the benefits -- paying a bigger cut to their suppliers and selling cheaper to end-consumers by cutting out the middlemen and reducing waste and transport costs. Thus, Montek Singh Ahluwalia, Deputy Chairman of the Planning Commission, said the measure is not a threat to small retailers and it will create efficiency in supply chain infrastructure. Wastage will fall, leading to lower prices of primary commodities. In India, 30% of fruits and vegetables, and 5-7% of grains are wasted between harvest and consumption, according to the Hindustan Times.

But economist Jayati Ghosh is worried that one Walmart will replace 1400 small retailers at the cost of 5000 jobs. "It is hard to believe that a capital intensive supply chain will lead to higher productivity," HT quotes Ghosh as saying. "It should have been improved by public investment, not FDI. His (Ahluwalia's) argument doesn't withstand scrutiny."