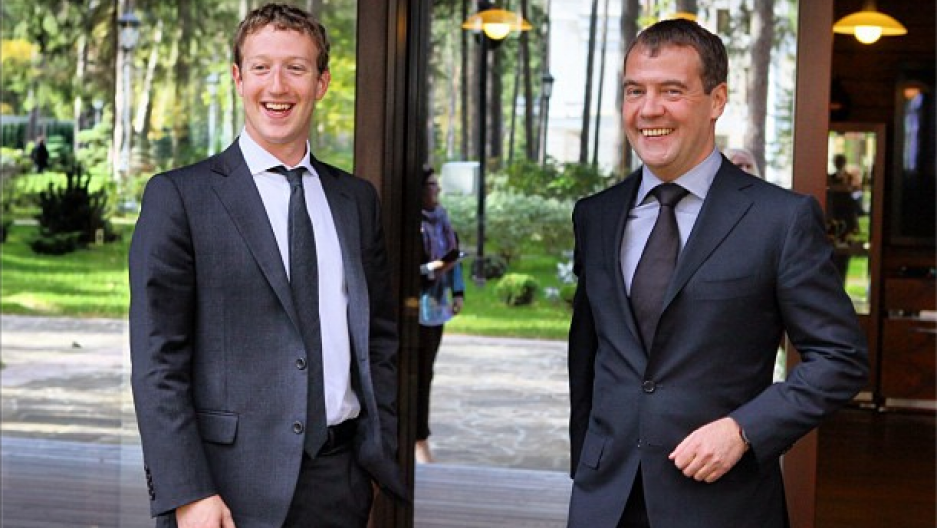 Russia's tech-savvy PM Dmitry Medvedev tweeted this picture of himself with Mark Zuckerberg after their meeting in Moscow. He probably ought to have put it on Facebook.
Credit: Dmitry Medvedev/Instagram
Share

Facebook's whiz kid met the Russian prime minister in Moscow on Monday, on what was also the final stop on the Facebook World Hack Tour. To judge by a photo tweeted by Medvedev afterwards (via Facebook's Instagram, natch), the famously suit-shy Zuckerberg even dressed up for the occasion.

"As you probably know, we in Russia have not only gas, not only oil, not only gold, not only diamonds – but also an IT industry," Medvedev is quoted as telling Zuckerberg.

Zuckerberg certainly does know, if the rumors are anything to go by. The Financial Times points out that Facebook remains a relative minnow in the world of Russian social networks, with around 10 million users nationally compared to the 40 million that log on to the largest home-grown version, VKontakte.

The main purpose of Zuckerberg's Moscow jaunt may be to scout for Russian talent and ideas, the FT speculates.

That seems to have Russian tech execs worried. RIA Novosti cited the founder of software developer IBS Group, Anatoly Karachinsky, as raising the prospect of a Facebook-led brain drain:

"Recently, a number of Russian programmers… have been invited for an interview at Facebook with Zuckerberg. Those who went said they were offered a job and immediate immigration to America."

Medvedev is keen to see resources going the other way, however. He and Zuckerberg discussed starting a Facebook research-and-development center in Russia as part of the planned Skolkovo innovation complex, Russia Today reported. They talked about Skolkovo, billed as the Russian answer to Silicon Valley, as "a place where startups could be of mutual interest," according to Medvedev's spokeswoman.