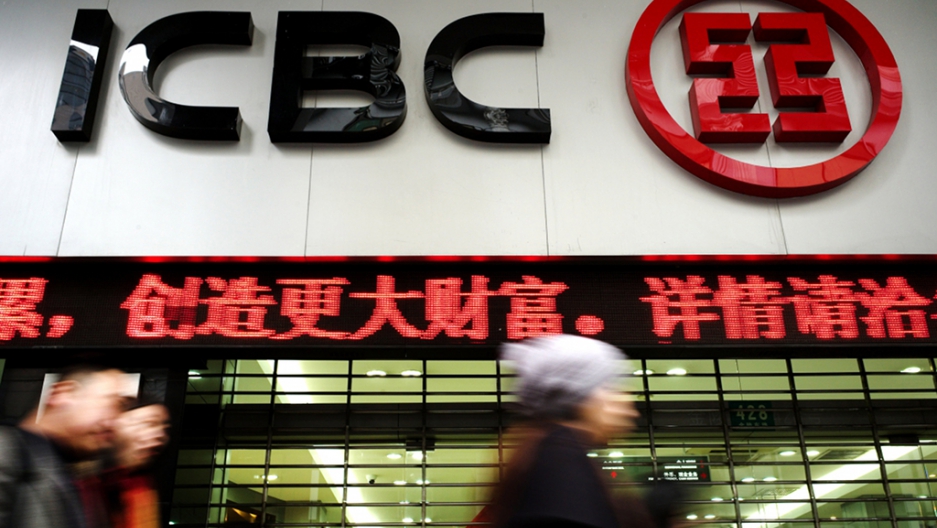 Pedestrians walk past a branch of China's banking giant Industrial and Commercial Bank of China (ICBC) in Shanghai. Romney's investment in the bank was recently revealed when he released his 2011 tax returns.
Credit: Phillipe Lopez
Share

HONG KONG — Shortly after the release of Mitt Romney’s tax returns, critics pointed out an apparent contradiction between his tough-on-China rhetoric and several of his investments.

This summer, Romney’s blind trust sold its positions in Chinese oil company Cnooc, banking behemoth ICBC, and 300 shares of Youku — a knock-off of YouTube, which is banned in China. He made over $11,000 on the Cnooc trade alone.

Of course, the Romney campaign has argued that holding these stocks in a blind trust means he didn't invest in them himself, immunizing him from any apparent hypocrisy. But the trust where Romney has parked his $250 million fortune is arguably not all that blind: It's in the hands of his personal lawyer and longtime associate, as ABC News reports.

And Romney himself has dismissed the opacity of blind trusts, calling them "an age old ruse." When he was running against Ted Kennedy in 1994, he told the Boston Globe: "You give a blind trust rules. You can say to a blind trust, don't invest in properties which would be in conflict of interest or where the seller might think they're going to get an advantage from me."

What are these companies? What’s their relationship to the Communist leadership in Beijing? And would holding these businesses really conflict with the role of being the American president?

The China National Offshore Oil Corporation has been no stranger to controversy. As a state-owned enterprise, its repeated attempts to acquire energy companies in North America has raised hackles and fears in Washington.

In 2005, the company's $18.5 billion offer to take over Unocal — known for its iconic orange “76” logo at gas stations across California — was tanked when Congress made clear it would block the deal over national-security concerns.

CNOOC further alienated US lawmakers when it struck a $16 billion deal with Iran in 2006.

Now, CNOOC may once again become an issue, as its proposed $15.1 billion acquisition of Canadian oil-sands company Nexen will also be reviewed by the US. (Nexen owns resources in the Gulf of Mexico.)

Why all the fuss about CNOOC? After all, state-owned oil companies are hardly unusual — think Norway’s Statoil, Russia’s Rosneft.

The difference here is perhaps best captured in a quote from Wang Yilin, CNOOC’s Chairman, from last May: “Large-scale deep-water rigs are our mobile national territory and a strategic weapon,” he told an audience in Beijing.

His remark was no idle threat. In the disputed waters of the South China Sea, where China has conflicting claims with just about every littoral state, CNOOC drilled three wells this year.

What the statement brings to light is how, when it comes to state-owned enterprises — particularly ones in energy and finance, which Beijing has deemed strategically important — the line between business and politics is very murky.

“The statement appears to reflect the mercantilist thinking of China’s ruling elite," writes Martin N. Murphy of the Atlantic Council. “Consequently, when it comes to China’s great commercial corporations such as CNOOC they should not be regarded as being like modern Western companies but as arms of a competitive state in which profit-maximization sits uncomfortably alongside the need to further Chinese state policy, whatever that might happen to be at the time.”

Of course, the truth is, many Americans may unwittingly hold investments in CNOOC. Have Fidelity’s Emerging Market’s Fund in your 401(k)? Then you’re also an indirect shareholder in this strategically sensitive company.

The Industrial and Commercial Bank of China, with 18,000 bank branches and over $2.7 trillion in assets, is the king of superlatives: biggest bank in the world by market capitalization (over $200 billion); most profitable bank in the world ($19.6 billion so far this year); world’s largest IPO as of 2006 ($21.9 billion, a record then broken by another Chinese bank).

While its shares trade on the Hong Kong and Shanghai stock exchanges, a majority of the company is owned by the Chinese government (over 70 percent, according to the Congressional Research Service).

Still, ICBC is theoretically quite independent. Previously, it was one of China’s four major, wholly state-owned banks. But in 2005, the government decided to make them go partially public, to make them into more efficient, commercial banks along Western lines.

“One of the stated goals of China’s banking reforms has been to transform the banks into relatively autonomous, profit-driven financial institutions, modeled to a certain extent after commercial banks in the United States and Western Europe,” writes Michael F. Martin, Asia specialist for the Congressional Research Bureau in a 2012 report on China’s banks.

Even so, he writes, virtually all of them “balance their commercial interests with the changing and sometimes conflicting directives and priorities issued by different arms of the central and local government.”

This dual nature can be seen in what analysts say is a mandate for Chinese banks to give preferential treatment to other state-owned businesses: cheaper loans, easy credit, even debt forgiveness. The downside of that policy is it means taking on riskier assets than a normal bank would.

So why does ICBC comply, if it means getting involved in some unprofitable, even hazardous lending? Because, analysts say, Communist Party leaders in Beijing could be potential future colleagues.

As Mingyi Hung of the University of Southern California writes in a recent report on state-owned enterprises, “There's a very strong link between the corporate sector and the political sector in China. It's pretty often that after you serve as a CEO of a big corporation, you become a top government official. You get promoted politically.”

That is perhaps one reason why ICBC's chairman Jiang Jianqing makes “only” $308,000 in salary, as opposed to the $23 million collected by JP Morgan CEO Jamie Dimon in 2011.

“That is not counting the 'grey income'" Jiang makes, observed Zijing Wu, a reporter for Bloomberg, on Twitter.

Nevertheless, ICBC has clearly done well on its mission to become profitable, though it was a bum investment for Romney — he lost money on the trade.

Buzzfeed reports that Romney’s blind trust also sold an indirect position in Youku, a web video service modeled on YouTube, in which Bain Capital was an early investor.

At first, Youku was a well-known piracy hub, where American movies and TV shows could be seen easily in defiance of international copyright laws. Today, however, Youku has cleaned up, and is viewed as a respectful steward of copyright.

Bill Bishop, an investor and editor of Sinocism.com, previously pointed out an inconsistency in Romney’s Youku stake, pointing out than in a Wall Street Journal op-ed, Romney wrote that “we must directly counter abusive Chinese practices in the areas of trade, intellectual property, and currency valuation.”

Youku, like all Chinese Internet companies, has to obey China’s laws and regulations, which include censoring content and limiting free speech. In the op-ed Romney also emphasizes “the character of the Chinese government — one that marries aspects of the free market with suppression of political and personal freedom.”  So tell us Mr. Romney, did you profit from Bain Capital’s investment in Youku?

Now, the answer appears to be "yes."

This year, Romney's blind trust also unloaded several hundred shares of Tencent, an Internet company that owns (among other things) China's largest instant-messaging service, as well as a position in New Oriental, an education company.

This may not be the end of Romney’s China investments — or his headache about them — as he and Obama continue to use China as a hammer to bash one another in the presidential campaign.