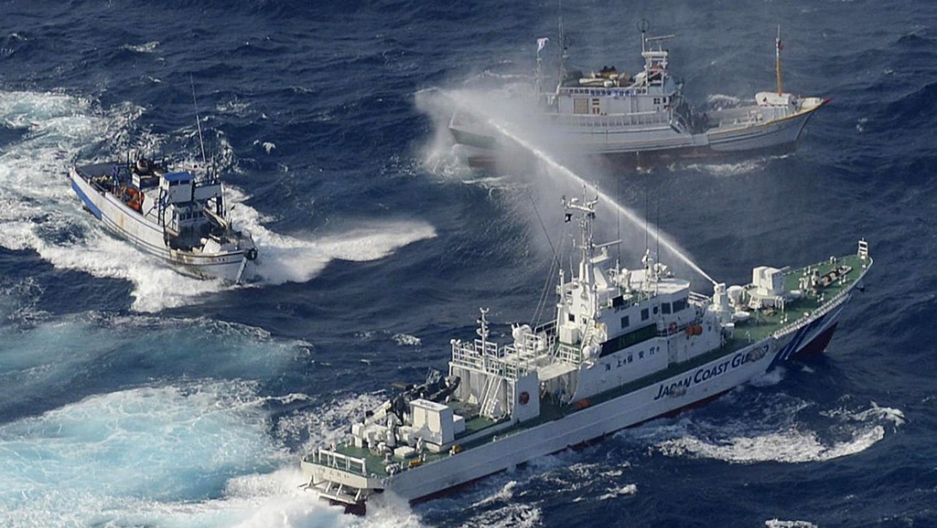 TOKYO — Japan’s main opposition party has elected an outspoken nationalist as its new leader, risking a rise in tensions with China and South Korea over already-bitter territorial disputes.

Six years ago, Shinzo Abe resigned after just one year as prime minister, citing poor health. Now he is attempting a comeback after being chosen to lead the Liberal Democratic Party [LDP] earlier this week.

The LDP, a largely pro-US, conservative party that has dominated Japanese politics for most of the past six decades, has endured a rare period in opposition since being swept from office by the left-of-center Democratic Party of Japan in 2009.

But with a possible election due before the end of the year, Abe is expected to capitalize on the government's dismal approval ratings following a controversial tax hike — which the LDP helped to push through parliament in return for an early election — and its handling of the economy.

The prospect of an Abe administration will not be welcomed in Beijing and Seoul, as the region struggles to take some of the heat out of territorial disputes that have sent Japan's relations with its neighbors to their lowest level in decades.

During his recent leadership bid, Abe portrayed himself as the least likely to blink first in disputes with China over the Senkaku islands — (known as the Diaoyu in China) and with South Korea over Takeshima (which the South Koreans call Dokdo).

"Japan's beautiful seas and its territory are under threat, and young people are having trouble finding hope in the future amid economic slump," he said. "I promise to protect Japan's land and sea, and the lives of the Japanese people, no matter what."

That emotive brand of nationalism won over party members and appears to be having a similar effect on Japan's voters. In a poll published today in the Nihon Keizai Shimbun, 35 percent of respondents said they would vote for Abe's party at the next election, versus 14 percent for the DPJ. Abe fared surprisingly well in a direct contest with his main opponent, the prime minister, Yoshihiko Noda, gaining 41 percent support against Noda's 28 percent.

If the LDP fails to win an outright majority, it could attempt to form a coalition that would take Japan even further to the right. Abe is known to admire Toru Hashimoto, the mayor of Osaka, who recently took his brand of rightwing populism on to the national stage with the formation of a political party that will run in the next general election.

Alone or as part of a coalition, an Abe-led administration could spell more trouble for relations between Japan and its neighbors. He has said he wants to water down a 1995 statement by the then socialist prime minister, Tomiichi Murayama, apologizing for Japan's wartime aggression, and to withdraw a 1993 apology for its use of Korean and other Asian women as sex slaves before and during the war.

During his first term as prime minister, Abe called for the revision of Japan's pacifist constitution and for patriotism to become part of the school curriculum. He granted the defense agency full ministry status and supported a bigger role for Japan's military in international peacekeeping efforts.

Noda said Japan would not compromise on the Senkakus' sovereignty — essentially the same message delivered by Abe last week — after China's foreign minister accused Japan of "stealing" its "sacred territory."

The islands, Noda said, "are an inherent part of our territory in light of history and also under international law. There are no territorial issues as such. Therefore, there cannot be any compromise that represents a retreat from this position."

The timing of Japan's next election is uncertain. Noda had promised to dissolve parliament "soon" in exchange for the LDP's support for his tax reforms earlier this year. Abe, though, may be made to wait; Noda has suggested that the opposition effectively reneged on that deal by supporting a recent non-binding censure motion against him in the upper house.

Abe will be hoping that voters' have forgotten his first attempt to lead Japan. He resigned in September 2007, citing a chronic bowel condition he says he now manages with a new drug regime. "I'm still responsible for causing all of you trouble with my sudden resignation as prime minister," he told party members after his victory on Wednesday. "I will do my utmost, with all of you, to regain to power."

Ill health may have been a cover, however. His administration was marred by scandals and gaffes that led to the resignations of four cabinet ministers and the suicide of another. Abe himself was the target of claims by a magazine that he had donated large sums to his political support group to avoid inheritance tax. A few months before he resigned, voters registered their frustration by condemning the LDP to a heavy defeat in upper house elections.

As the product of an established political family — his father was foreign minister in the 1980s and his maternal grandfather, Nobusuke Kishi, became prime minister in the late 1950s — Abe is unlikely to endear himself to voters fed up with the inordinate influence wielded by Japan's "hereditary" politicians - one reason why outsiders such as Mayor Hashimoto are so appealing.

But if his pedigree has a predictable ring to it, Abe has shown himself capable of doing the unexpected. Soon after he became prime minister in 2006, he visited Beijing and Seoul in attempt to mend fences after a steady deterioration in ties under his hawkish predecessor, Junichiro Koizumi. If the electorate gives Abe a second chance later this year, he could do worse than repeat the gesture.