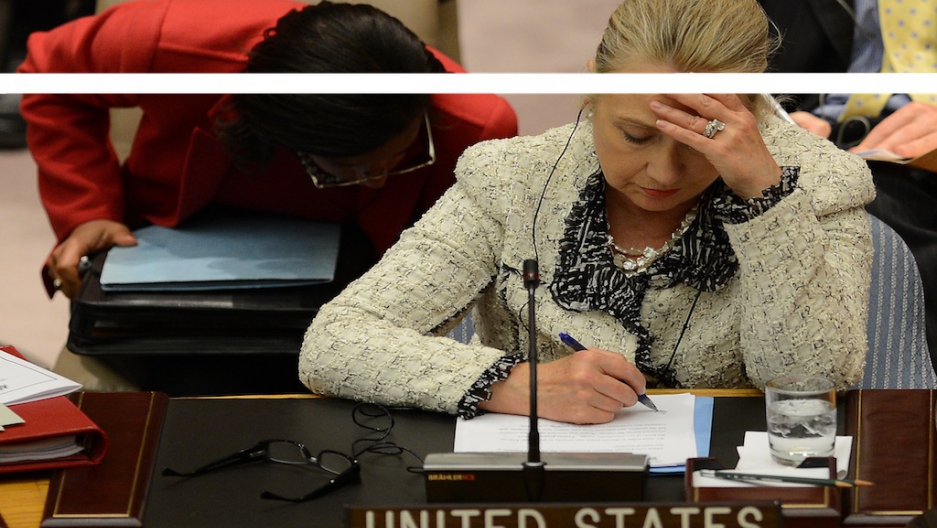 US Secretary of State Hillary Clinton attends a UN Security Council meeting on peace and security in the Middle East and doodles on her remarks.
Credit: EMMANUEL DUNAND
Share

During the long months of the United Nations General Assembly (generally two or three), there are always a few standout moments when world leaders get silly and let loose while the cameras are watching.

This is what's happened since the Assembly opened earlier this week.

Hillary Clinton got bored and doodled on her printed remarks at a meeting of the United Nations Security Council, according to the Daily Mail, which acquired pictures of a series of spirals, stars and circles.

Generally deep in concentration when at the UN or other event in her capacity as Secretary of State, the doodles may show just how boring some of these meetings can be.

... is Iranian President Mahmoud Ahmadinejad making sense? In a markedly calm speech yesterday, the famously fiery (if not totally insulting) Persian leader spoke about elections and sounded eerily like an Occupy activist.

"Are we to believe that those who spend hundreds of millions of dollars on election campaigns have the interests of the people of the world at their hearts? Despite what big political parties claim in the capitalistic countries, the money that goes into election campaigns is usually nothing but an investment.In such countries, people have to vote for parties that only represent a small number of people. The will and the views of the masses have the least impact and influence on the big decisions especially those made about the major domestic and foreign policies. Their voices are not heard even if they constitute 99 percent of their societies."

And then he called Israelis a bunch of "uncivilized Zionists" and proposed a new world order, so it must have been a fluke.

More from GlobalPost: Ahmadinejad travels to United Nations for last address as President of Iran

A star is born

Secretary General Ban Ki-Moon is an unlikely YouTube personality, but sure enough, the South Korean leader of the UN has uploaded a series of videos over the past few days on the UN's official account. He tells the odd little story below about a situation at the 2011 General Assembly that had delegates using the stairs because the power went out. He apparently thought it was the funniest thing that happened all year.

Never one to miss an opportunity to address a crowd, WikiLeaks founder and internationally wanted man Julian Assange addressed delegates to the General Assembly in a jam-packed sideline event hosted by Ecuador. Assange spoke of his persecution by the United States and at length about Bradley Manning via a choppy satellite connection with London. His speech also touched on the need for strengthening the right to diplomatic asylum in general and the hypocrisy of the West during the Arab Spring.

"It must have come as a surprise to the Egyptian teenagers who washed American teargas out of their eyes (during the Arab Spring) to hear that the U.S. supported change in the Middle East," Assange said.

He then took questions.

A number of Muslim countries, led by Turkey, Kuwait and Indonesia, want to impose an international ban on blasphemy, according to Al Jazeera. This has led to a loud outcry from free-speech advocates like Human Rights Watch, and the Human Rights Council, which has been on the other side of this debate for years.

Turkish Turkish Prime Minister Recep Tayyip Erdogan believes the 57 Islamic nations of the Organization of Islamic Cooperation ''should speak forcefully with one voice'' and would like the UN to pass a resolution for ''international legal regulations against attacks on what people deem sacred," according to the Age.

As much fun as this 67th General Assembly is shaping up to be, who can forget the ridiculous antics of the late Libyan President Gaddafi in 2009? Classic.