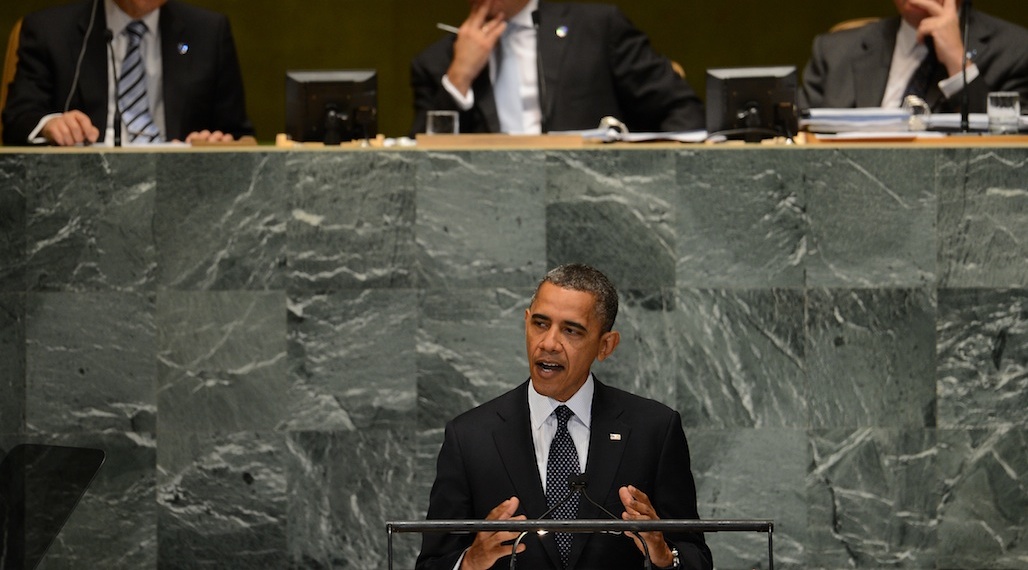 US President Barack Obama addresses the 67th UN General Assembly at the United Nations headquarters in New York, Sept. 25, 2012. Obama on Tuesday demanded 'sanctions and consequences' for atrocities in Syria and said President Bashar al-Assad's rule must come to an end. 'The future must not belong to a dictator who massacres his people,' Obama told the UN General Assembly in a keynote address.
Credit: EMMANUEL DUNAND
Share

Obama addressed the United Nations General Assembly soon after 10 a.m. Tuesday in a speech that focused on ongoing tensions throughout the Middle East and sought to draw parallels between the UN's founding principles and US values.

The president opened his talk with a description of late US Ambassador Christopher Stevens, who died two weeks ago during an attack on a US consulate in Benghazi.

"Chris was killed in the city that he helped to save," Obama said, promising to bring the perpetrators of the attack to "justice." But he went on to highlight the call for calm from leaders in the region in the wake of the attacks, and the majority of citizens in both the Middle East and the US who do not support the violence.

"The future must not belong to those who target Coptic Christians in Egypt — it must be claimed by those in Tahrir Square who chanted 'Muslims, Christians, we are one,'" Obama said.

Later in the speech, he noted the "common heartbeat of humanity" that should unite more than divide.

On harder security topics, Obama spoke of the need for engagement to solve the crisis in Syria, and also stressed the importance of Iran not obtaining a nuclear weapon.

"Make no mistake: a nuclear-armed Iran is not a challenge that can be contained. It would threaten the elimination of Israel, the security of Gulf nations, and the stability of the global economy. That is why a coalition of countries is holding the Iranian government accountable. And that is why the United States will do what we must to prevent Iran from obtaining a nuclear weapon," he said, according to a prepared transcript.

"America wants to resolve this issue through diplomacy, and we believe that there is still time and space to do so," Obama said. "But that time is not unlimited."

The General Assembly is taking place in New York City, but according to GlobalPost correspondent Jean MacKenzie, New Yorkers are unimpressed with the foreign invasion. Not many are paying any attention to speeches by world leaders being broadcast from the UN.

When Obama’s motorcade passed, no one even stopped to look.

"New Yorkers are too busy to stop for the president," said Yolanda Hernandez, a chef at the Godiva store on 7th Avenue, just a block away from the hotel where Mitt Romney had spoken an hour earlier. “We have work to do."

Just six weeks from the US presidential election, Obama has faced criticism of his foreign policy from Republican nominee Mitt Romney, who has specifically gone after Obama's handling of the recent outrage in the Middle East over an anti-Islamic film produced in the US. Romney called out Obama's remark that there will be "bumps in the road" with Arab countries who are transitioning into new democracies.

At a recent event in Pueblo, Colorado Romney replied, “Um, bumps in the road? We had an ambassador assassinated, we had a Muslim Brotherhood member elected to the presidency of Egypt, 20,000 people have been killed in Syria, we have tumult in Pakistan, and, of course, Iran is that much closer to having the capacity to build a nuclear weapon.”

Obama's Tuesday speech condemned the wave of violence in Muslim countries sparked by the film, produced in the US, which he called "crude and disgusting." The film was originally blamed for the death of the US Ambassador to Libya, Christopher Stevens; however, that conclusion has been called into question. Stevens' death is still under investigation.

"There is no speech that justifies mindless violence,” Obama said.

This is the only time Obama will address members of the UN this week. He will spend 24 hours in New York City and will skip all private meetings with US allies, according to Time. US Secretary of State Hillary Clinton will meet with allied nations such as Afghanistan, Egypt, Libya and Pakistan instead.

Watch video of Obama's speech to the UNGA below: