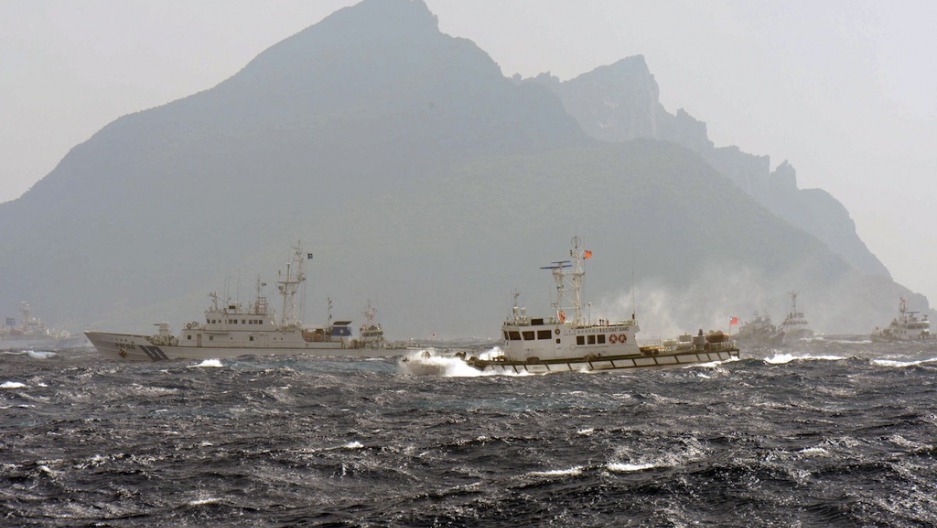 A Taiwan Coast Guard boat (R-with red flag) is blocked by a Japan Coast Guard vessel (L) in the waters near the disputed Diaoyu / Senkaku islands in the East China Sea. Both Japan and Taiwan want use of the islands. The Chinese may have seen all this action from above with new drones that will be used to monitor the islands and the areas around them, which China believes are theirs.
Credit: SAM YEH
Share

As a dispute with Japan heats up again this week over an archipelago in the South China sea, drones may be China's first step toward militarized surveillance of the islands, which were recently purchased by the Japanese government from a private owner. China believes the islands belong to them.

The Beijing Times reported that the Chinese State Oceanic Administration (SOA) had obtained satellite images of the Senkaku (Diaoyu in Chinese) Islands, and Xinhua said SOA were planning to set up at least 11 mainland bases from which to operate unmanned aerial vehicles (drones).

An oceanic researcher at the Chinese Academy of Social Sciences said to the People's Daily newspaper, "that while the satellite surveillance is mainly designed to monitor oceanographic changes, it is also 'strategically important for national defense,'" according to the Japan Times.

China's interest and development of seafaring drones is not surprising, as the technology has been available for quite some time, and the US, Israeli, Iranian and Russian militaries are all equipped with unmanned aircraft. The UK, Canada, France and India have also expressed interest in using drones, because "unmanned aerial and naval vehicles promise to revolutionize naval operations and warfare over the next decade," according to retired Navy officer Carl Schuster, who penned a column on the use of naval drones by China last month in the Asia Times.

Russia Today reports that the use of drones will likely be beefed up by 2015. Currently, "three Chinese patrol vessels remain in the seas near the uninhabited archipelago, and have briefly entered waters which Tokyo considers Japanese territory."

This was answered with increased rhetoric from Japan and a display from Taiwan, which sent "a flotilla of 40 fishing boats" to assert its right to continue fishing in the region, said RT.

On Sunday, China also unveiled its first aircraft carrier, a move that corresponds with the idea the country is determined to increase monitoring of its surrounding areas and a development that may inflame already fragile tensions with Vietnam and the Philippines, two other countries embroiled in disputes with China, along with Japan and Taiwan.

More from GlobalPost: Are Iran's drones coordinating attacks in Syria?

The drones and aircraft carrier are the most visible examples that "Beijing is pouring money into advanced air defenses, submarines, anti-satellite weapons and anti-ship missiles that could all be used to deny an adversary access to strategic areas," says PhilStar.com, a Filipino news site. However, neither the drones nor the aircraft carrier is fully operational at the moment, but both are undergoing testing in an effort to be up and running soon.

"Yu Qingsong, a division chief of the SOA, said that with the experience learned from the pilot program, the agency would try to develop a managerial system and technical regulations for setting up surveillance and monitoring bases in provinces along China’s coastline by 2015," reported PhilStar. "According to SOA, the use of unmanned aircraft for remote-sensing marine surveillance is relatively flexible, low-cost and efficient, compared with satellite remote sensing, aerial remote sensing and field monitoring."