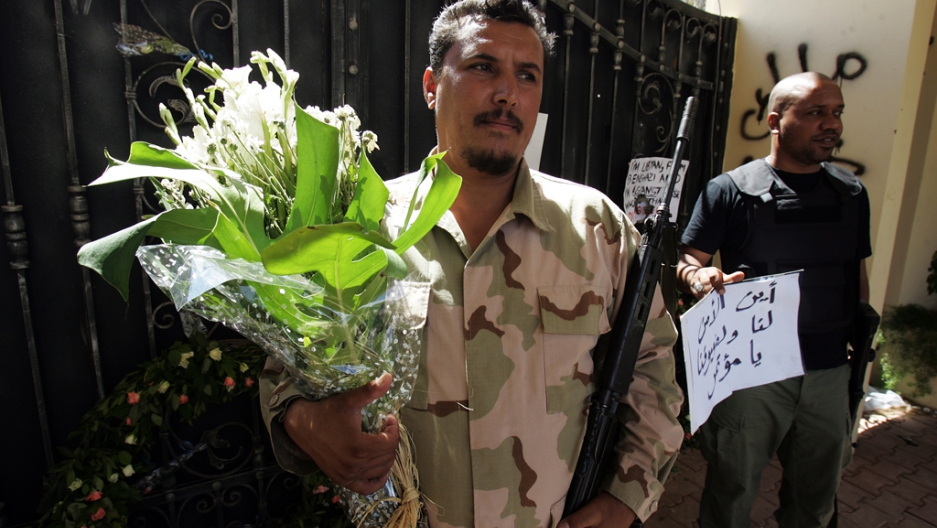 Libyan security guards hold flowers and slogans left by people protesting against last week's attack, in which ambassador Chris Stevens died, at the main entrance of the US consulate in Benghazi. Around 30,000 Libyans joined a rally in Benghazi on September 21, 2012, protesting the powerful militias that have run rampant in the country.
Credit: AFP
Share

Social media use has been a key component of the State Department’s strategy for outreach and diplomacy under the Obama administration. This “21st Century Statecraft” has allowed for both unprecedented access to informal public opinion and a rapid pace of official communication.

The push to integrate 21st-century tools into the State Department's engagement and communication strategies coincided with a renewed "hearts and minds" approach to diplomacy under the Obama adminstration — emphasizing repairing the relationship between the US and the Muslim world, in particular.

But the nature of social media, it could be said, gives control over messaging with one hand and with the other takes it away. That’s been highlighted during the recent rash of anti-US protests that erupted across the Middle East and North Africa, spreading to Asia and Europe. The seeds of this discontent have been a matter of discussion, with culprits ranging from US drone strikes to local politics being offered as reasons for anger that has fallen under the blanket heading of "anti-US sentiment."

The catalyst for the protests, however, was social media: a crudely-produced video, freely posted to YouTube. Several commentators have noted that nascent democratic movements ushered in by the Arab Spring probably enabled these public assemblies, making reaction even more fierce.

We could call it an irony. But more simply, it is a reality.

In a speech on Tuesday to the United Nations General Assembly, President Obama himself touched on the fact that information-sharing technologies now play a wide role in world affairs. "At a time when anyone with a cell phone can spread offensive views around the world with the click of a button, the notion that we can control the flow of information is obsolete," he said. "The question, then, is how we respond."

A State Department official appeared to acknowledge similar challenges to social media diplomacy in an e-mail to GlobalPost.

"Social media offers the Department tremendous opportunity to share information and to dialogue with people around the world. However, with almost 300 diplomatic posts around the world, it’s also a lot of ground to cover," and engagement "requires adapting to each country’s language, culture and specific platforms," the official wrote.

For that reason, diplomatic posts handle their own social media accounts on a day-to-day basis, the official said.

"This adaptation to the local environment and the pace of social media means that the management of Department-affiliated social media accounts at our missions around the world is handled by those missions, with general direction from Washington.”

That freedom seems like a no-brainer — who better to communicate at the ground level than the people on the ground? — but it can pose its own messaging problems. The best recent example comes from the very start of the "anti-US" protests in Cairo. The US embassy there, which had previously established a vocal presence on Twitter, issued a statement early on in the protests condemning the film that caused initial anger.

Though dispatched independently by the embassy, in advance of any violence in Libya or beyond, that statement ended up being used by Mitt Romney's campaign to criticize President Obama's handling of the unrest that was spreading in the Middle East and North Africa.

And, in the days that followed, protest — some of it fatally violent — spread further across the Middle East and Africa, into Asia and Europe. YouTube eventually blocked access to the inflammatory video in Libya and Egypt, while governments in Afghanistan, Pakistan and Bangladesh blocked the content themselves.

More from GlobalPost: US Embassy in Cairo Twitter feed gets feisty

Have these recent events caused the State Department to revisit its policies on 21st century statecraft?

A State Department official did not answer the question in specific terms. But the official did note that all department policies and procedures, which are outlined in the Foreign Affairs Manual, "are constantly under review."

"Social media helps inform the policy making process as well as influences the thinking of our diplomats around the world," the official wrote.

Philip Seib, a professor of journalism and public diplomacy at the University of Southern California and the author of "Real-Time Diplomacy: Politics and Power in the Social Media Era," cautioned that social media as a tool of diplomacy, despite its rise, will always face limitations.

"I think the '21st century statecraft' efforts have been successful but not transformative. In many parts of the world, reaching the desired audiences must rely on 20th century methods because of slower technological development," he wrote in an e-mail to GlobalPost.

Social media use is one among several diplomatic tools that needs to be carefully wielded in response to recent protests and the strong feelings that have accompanied them, he said. "Social media can be helpful in the aftermath of this upheaval, but only as part of larger engagement strategies. Experienced diplomats know that they must not neglect face-to-face contacts as well as electronic ones."

"Diplomats must know when to try to slow the pace of their work rather than always trying to respond to events instantly," he added.

Nonetheless, Seib pointed out that social media has provided new eyes and ears on the ground for dimplomats. "Social media provide the ultimate open source intelligence for policymakers," with benefits that include "the enriched information flow that enhances decision making at many levels of the policy process," he wrote. "Many US diplomats are putting considerable energy and creativity into their electronic engagement projects and connecting with the public to an unprecedented degree," he added.

In fact, the fruits of successful engagement — social or otherwise — have made themselves clear in the aftermath of the attack on the US consulate in Libya, if far more quietly than any failures. Some 30,000 Libyans rallied against violent militias in their country in recent days, some of them mourning the loss of "friend" Chris Stevens.

Whether traditional or 21st-century diplomacy, the test of its effectiveness seems to be the same: Does it really engage? Is it facilitating communication and cooperation?

In his UN address on Tuesday, President Obama touched on the power of engagement done right.

"Today I promise you this — long after these killers are brought to justice, Chris Stevens’ legacy will live on in the lives he touched," Obama said.

"In the tens of thousands who marched against violence through the streets of Benghazi; in the Libyans who changed their Facebook photo to one of Chris; in the sign that read, simply, 'Chris Stevens was a friend to all Libyans.'"