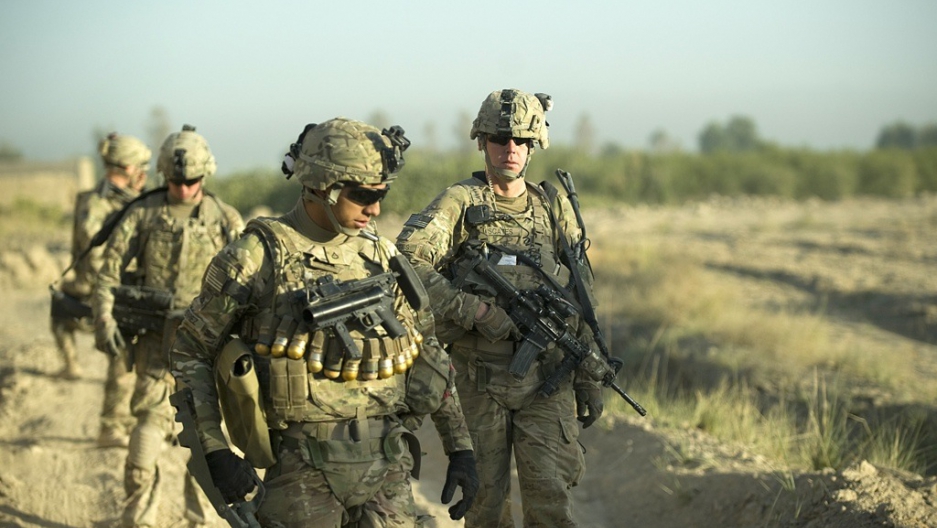 KABUL, Afghanistan — Almost three years after US President Barack Obama vowed to "seize the initiative" with a surge of forces to Afghanistan, his great gamble has come to an end.

The final remnants of those extra American troops departed last week, leaving behind a country still wracked by violence and bitterly divided, and still unsure of what has been achieved.

For each triumph on the battlefield there was, people here say, often a loss elsewhere. Now with time running out and Washington having played its strongest card, optimism is hard to find.

Even when lawmaker Abdul Jabar Qahraman is taking the short trip from his house in Kabul to the Ministry of Defense across town, he has his bodyguards well prepared and a plan for the journey carefully laid out.

More from GlobalPost: This guy has been fighting occupations in Afghanistan for 40 years

Like anyone else who openly opposes the Taliban, his world is shrinking fast and he knows it. "All over Afghanistan security does not exist," he said.

A huge figure who swears profusely, Qahraman was a general in the army during the Communist era of the 1980s. He now serves as a Member of Parliament for Helmand, a southern province that absorbed many of the 33,000 extra troops deployed in the surge.

US Marines suffered heavy casualties there as they fought for control of some of the country’s most hostile territory. NATO is adamant the situation has improved. Whether any success can last, however, is another matter.

The Taliban have always demonstrated an ability to adapt to changing conditions and the feeling persists that they are confident enough of ultimate victory to accept temporary defeats and setbacks.

Qahraman is skeptical the surge had any positive impact.

He claims assassinations are still a serious problem in his province and believes the central government will collapse if all conventional foreign combat troops leave Afghanistan as scheduled in two years.

“Every single day our people are dying at the hands of the insurgents. Anyone can kill anyone else at any time without any fear and without being arrested,” he said.

The increasingly tense and paranoid atmosphere developing in much of the country was only heightened in the week leading up to the end of the surge, when a series of alarming events hit the headlines.

First a Taliban assault inside the largest military base in Helmand left a pair of US Marines dead. The attack is estimated to have caused around $200 million worth of damage.

Next the rebel faction that had previously shown the most interest in peace talks conducted a suicide attack in Kabul that killed 12 people. The group, Hizb-e-Islami, said the bomber was a young woman named Fatima.

Then it was revealed that NATO would be suspending the majority of joint operations with Afghan forces because of the growing number of foreign troops being gunned down by their local colleagues.

In his 2009 speech announcing the surge, Obama declared “a more effective civilian strategy” would accompany the additional military personnel, telling the Afghan government, “we expect those who are ineffective or corrupt to be held accountable”.

But Abdul Satar Saadat, a Kabul-based analyst, criticized the US for not following through on this. He said the Afghan parliament had shown some signs of growing strength, but claimed warlords continued to dominate the political scene.

“Besides the invasion and the occupation this was another excuse used by the Taliban to receive the support of the people,” he said.

There are still roughly 68,000 American troops in Afghanistan, compared to the 32,000 that were here when Obama first took office. Since 2001, more than 2,000 US troops have died in the war.

Although there is an acknowledgement among officials in Washington that some kind of insurgency is likely to continue for years to come, they insist the government here will be capable of defending itself and rule out any chance of the rebels seizing power.

More from GlobalPost: North Waziristan: The problem no one wants to talk about

Many Afghans see the situation differently and are terrified about what the future could hold.

Rana Tarin is a senator for Kandahar province where, she told GlobalPost, the surge has improved security. Now she fears those gains will soon be lost as the Taliban seek to reassert themselves in their traditional heartland.

“Before there was killing every single day: assassinations, attacks on police stations, suicide attacks. Right now there has been a large decrease but that does not mean we have solved our problems 100 percent,” she said.

“Because they are very tired of fighting, the Kandahari people think that any day they do not lose a member of their family or hear an explosion in the city is good.”

In some form or other the defeat of the Soviet Union haunts everyone here. The US and its NATO allies are desperate to avoid a similar debacle and the citizens of this country remember all too well what fate awaited them the last time they were left to fend for themselves.

“A lot of blood was spilled, Afghans were massacred and a lot of them went outside as refugees,” Tarin said. “Again there is a worry the same things will happen.”