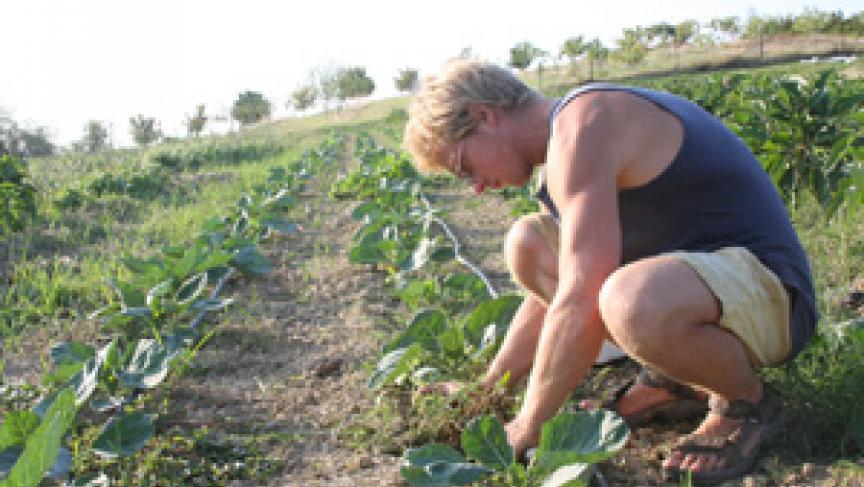 Aaron Martin works on an organic farm in Italy for World Wide Opportunities on Organic Farms. (Photo by Chris Livesay.)

The air is thick with the scent of ripening almonds At the Dulcamara cooperative farm in Emilia-Romagna, in northern Italy.

In an open meadow with soccer goals at each end, farmers are busy feeding sheep, chickens and three boars, their bellies nearly dragging on the ground as they run toward a fresh helping of slop.

You couldn’t pay some people to do this dirty job. But the six workers here at this farm aren’t paid at all. They’re volunteers with WWOOF or World Wide Opportunities on Organic Farms, a non-profit network that’s spread to more than 50 countries in its 40 years of existence, said Bridget Matthews, the WWOOF coordinator for Italy.

“The idea is to help organic farmers," she said. "Organic farming is very labor intensive. Most of our farmers don’t have any money and they couldn’t afford to pay someone. The idea is they teach you about organic farming and you help out in exchange for food and lodging.”

WWOOF has given a boost to Italy’s €3 billion organic-food industry, which has tripled in size in the past decade. The euro crisis, and Europe’s rising unemployment rates, are also fueling WWOOF’s growth. Since 2008, participation in Italy has nearly doubled, from 2,200 to 4,300 volunteers.

Growing numbers of people have left their homes and taken up migrant farming because they have nowhere else to go.

Giuseppina, who asked not to be identified by her last name, lost her job three years ago as a parking garage manager in Piedmont. She’s been "WWOOFing" full-time as a farm cook ever since. At 52, she says she doesn’t have many other options.

“People of my age have difficulties finding a job in Italy, especially women,” she said. “It’s less of a job market for women.”

The job market’s not good for young people, either.

Aaron Martin, 25, is from Florence. He’s planting broccoli at the farm because he couldn’t find a job, despite earning an economics degree in February.

“This degree is useless. Then you need a master’s, and then they ask you for five years experience before you can work,” he said.

Italy’s jobless rate is 10.7 percent, according to the EU.

“You cannot solve the problem you have created in 40 years just in 10 months,” said Michel Martone, Italy’s deputy labor minister.

Since taking power a year ago, his government has introduced sweeping reform measures to save the economy from collapse, including tax breaks for companies that hire young people.

“We have to do more, and we can do more,” Martone said. “We have to say the truth, which is it’s not going to be easy, but there will be a solution and we are on the right way to achieve it.”

In the meantime, Aaron and Giuseppina are toughing it out on farms — planting broccoli, feeding sheep and pouring pig slop.

It’s not such hardship, though. Both say they’ve learned to love it, and they don’t plan to give up this Arcadian way of life anytime soon.

If fact, Giuseppina says someday, she’d like to run her own small farm.

“I’m very happy. I would suggest this experience to all people who lose their job,” she said. “All it is about is to enjoy nature — touch it, smell it, feel it, cook in it.”

In other words, she’s found something more meaningful than a paycheck, at least for the moment.