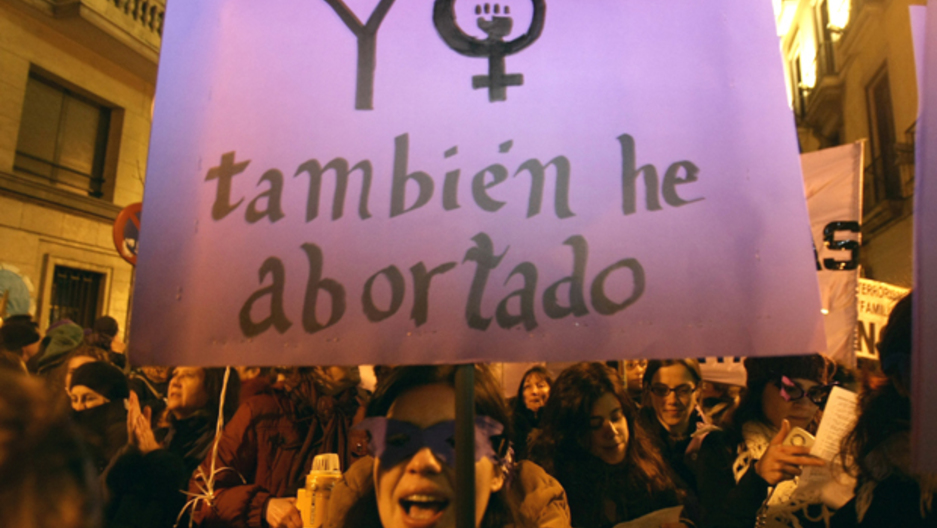 A woman carrying a banner that reads, "I also had an abortion," takes part in a demonstration to mark International Women's Day in Madrid in 2010. (Photo: Andrea Comas/REUTERS)

Share
In Spain a liberalized abortion law could soon be amended, making the procedure once again criminal. In 2006 Spain's then-socialist government changed the law, allowing any woman to get an abortion up until 14 weeks. Now the conservatives are back in power, and they want the restrictions back too. Spain's conservatives have long argued that abortion is not a right, but a crime. In the old days, under the dictator General Francisco Franco, there were three exceptions: in case of rape, when woman's health faced serious risks or if the fetus was deformed. Now, the conservative government of Prime Minister Mariano Rajoy wants to bring the so-called "exceptions law" back — and go even further. Regardless of whether a fetus is deformed, his bill says, it must be delivered. "The idea is that women who want to be mothers shouldn't be able to get abortions due to social, economic and family pressures," said Spain's Health Minister Ana Mato, recently. Many conservative Spaniards see the abortion bill as progressive — a long needed reform. Nicolas de Carcedeas is with the Spanish chapter of Right to Life. "If the abortion law is amended," he told Spanish TV, "it would be the first time in thirty years that we see an advancement in the protection of life in Spain." Carcedeas urged the government not to tarry, citing Spain's roughly 300 daily abortions. But Spanish society is split down the middle on what constitutes moving forward — or backward. When former socialist Prime Minister Jose Luis Rodriguez Zapatero first came to power in 2004 he passed a raft of so-called progressive laws: He liberalized abortion, legalized gay marriage and let same-sex couples adopt children. Back then the economy was strong, and Zapatero capitalized on the country's general sense of well being to advance his social causes. There were protests, but by and large he scored points among Spanish liberals. Socialist leader Purificacion Causapie said with regard to abortion, Zapatero put Spain on par with most of the rest of Europe. "Rajoy's proposal," she said, "would put us at the bottom of the line in Europe, with regard to rights and liberties for women." In his second term Zapatero dropped his social agenda, overwhelmed by the financial crisis. Today current Prime Minister Mariano Rajoy appears just as overwhelmed. But Spain's sinking economy may just be what's allowing him to embark on a social about-face. He may be betting that most people are too busy worrying about their jobs to object strenuously to his proposed restrictions on abortions. And like Zapatero in his day, it could turn out to be the only arena in which Rajoy scores some points.