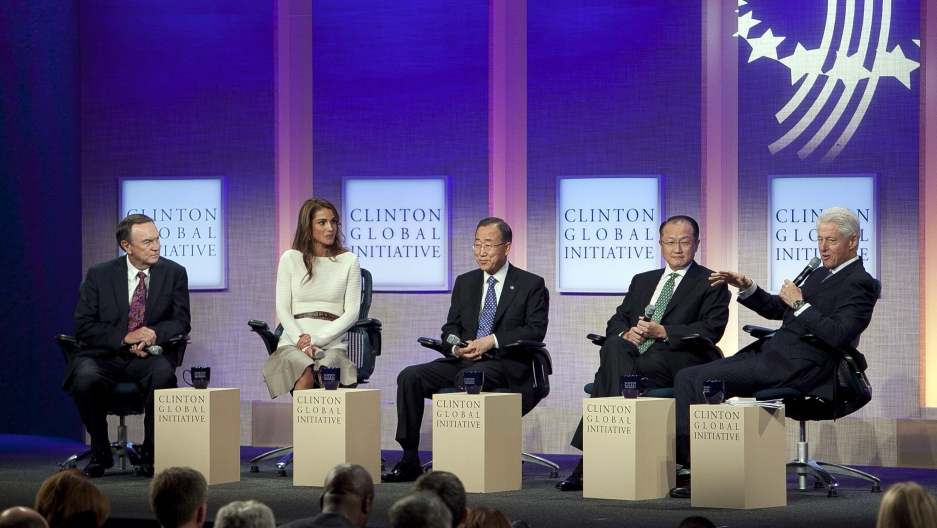 (L-R) Michael T. Duke, President and CEO of Wal-Mart, Her Majesty Queen Rania Al Abdullah of the Hashemite Kingdom of Jordan, Ban Ki-Moon, Secretary-General of the United Nations, Jim Yong Kim, President of the World Bank Group and former US President Bill Clinton are seen during the session 'Designing for Impact' at the Clinton Global Initiative Sept. 23, 2012, in New York City. Timed to coincide with the United Nations General Assembly, CGI brings together heads of state, CEOs, philanthropists and others to help find solutions to the world's major problems.
Credit: Allison Joyce
Share

‘‘If the new president of Libya asked you to open a store in Tripoli, would you consider it?’’

So asked Bill Clinton at the opening meeting of his Clinton Global Initiative summit on Sunday, the Associated Press reported.

Walmart does not operate in Tripoli, Libya, but does already operate in other high-risk areas in Africa, Duke reportedly answered.

Salon reported that the idea to open a store in Libya reflects Clinton's interest in creating jobs and "international cooperation," and noted his recent effusive praise for the controversial mega-store's sustainable energy initiatives.

More from GlobalPost: Working conditions in Bangladesh worry US importers

Reuters described Clinton as having "lauded" Walmart's practices during the Sunday opening meetings for its efforts toward social responsibility.

Clinton's initiative, and the annual meetings that are part of it, freuqently seek to highlight opportunities for philanthropic ventures to invest in local communities.

"In the next three days, I look forward to seeing how the world’s leading thinkers will propose creative and inclusive solutions to the obstacles facing our planet,” Clinton told attendees on Sunday.

Last week, Clinton spoke about Walmart's investment in photovoltaics — the technology behind solar panels — during an appearance on The Daily Show. Watch the interview below: