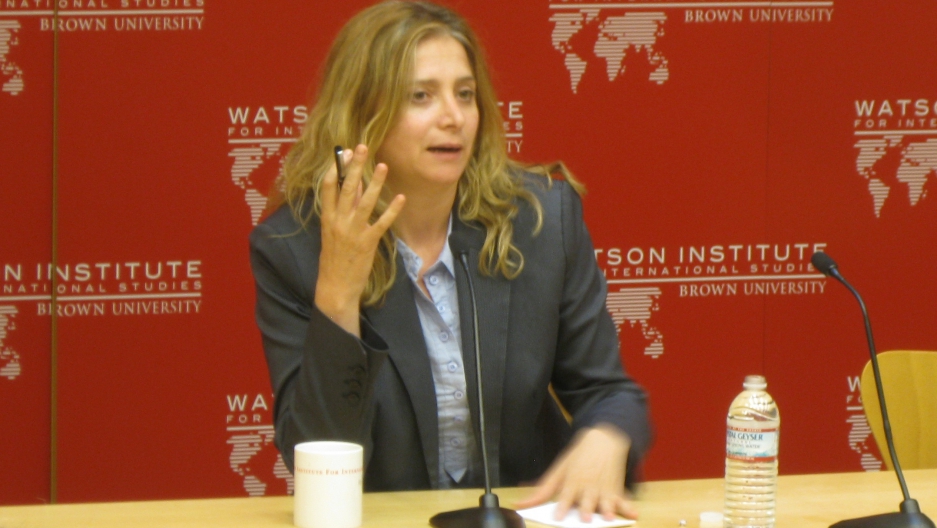 Syrian author Samar Yazbek talks about her book “A Woman in the Crossfire” at Brown University.
Credit: Steve Landrigan
Share

PROVIDENCE, RI — The Hope Club is a strange setting for such a tale of despair.

This exclusive social organization within the confines of Brown University is situated on Benevolent Street, and does not permit smoking, cell phones or denim, although, according to the club’s general rules, “neckties and bow ties are optional for gentlemen on Fridays as well as from Memorial Day weekend through September.”

Samar Yazbek seems in every way a violation of the austere principles of the Hope Club: The Syrian writer with her wide light eyes and wild fair hair, is outrageously angry, a bit uncontrolled, and looks to be badly in need of a cigarette.

In her new book, “A Woman in the Crossfire,” Yazbek, 42, talks incessantly of nicotine, caffeine and Xanax as her main crutches against the increasing horror of her daily existence.

“What is this madness?” she writes. “Death is a mobile creature that now walks on two legs. I hear its voice, I can stare right at it. I am the one who knows what it tastes like, who knows the taste of a knife against your throat, the taste of boots on your neck … I am no longer afraid of death. We breathe it in. I wait for it, calm with my cigarette and coffee.”

Yazbek has documented the first few months of the Syrian uprising, keeping a careful diary of the massacres, the violations, the growing fear and despair.

More: GlobalPost reports from inside Syria

A member of a prominent Alawite family, Yazbek enjoyed some measure of privilege in Syria. The regime and most military and intelligence officers are also Alawite, which is a minority sect of Shiite Islam.

But Yazbek was rebellious from birth. She ran away from home the first time at 16. She was forced to go back, she said, but is not willing to divulge the details.

“It was impossible to exist on my own,” she said. “My family was very unhappy with me.”

She married for love, against her parents’ wishes, only to divorce her husband a few years later.

A well-regarded novelist, Yazbek used her writing skills to document her growing disillusionment with the regime of Bashar al-Assad, the president of Syria, who inherited the position from his father, Hafez al-Assad, upon the latter’s death in 2000. The Assad family has ruled Syria for more than 40 years.

“I believe in the expansion of social and political freedom,” Yazbek said. “I opened myself up to great anger and criticism, not only from my family but from society as a whole.”

It also made her a traitor.

When the Syrian uprising began in March 2011, Yazbek could not keep away from the protests. She walked with the demonstrators, she wrote about the violence and she put herself squarely in the crosshairs of an angry and vengeful regime.

Yazbek was detained, she was beaten and insulted, she and her daughter were threatened. Her book details numerous horrifying episodes when death seemed an immediate certainty.

But she was spared.

“I was arrested many times, but I never spent a night in jail,” she said. “I think that the regime did not want to admit that there was such resistance among Alawites. Instead of killing me, they tried to destroy me in other ways.”

The government started a campaign of character assassination, Yazbek said, circulating innuendos about her morality.

“This is like death in a Muslim country,” she said. “They did everything possible to bring me down.”

After repeated pleas from her friends and her daughter, Yazbek finally left Syria about a year ago. She goes back periodically, sneaking into the country incognito, but she says she will not go back officially until the Assad regime has fallen.

Now on a book tour in the United States, Yazbek is trying to get her message across to what she sees as a largely indifferent public.

“I meet with politicians,” she said “They do not want to help us. They say they are afraid of another Afghanistan, of another Iraq. They say that the opposition are radical Islamists. They are wrong. This is just an excuse to justify themselves to their own populations.”

It is true that the United States, at least, has been reluctant to get involved. President Barack Obama has not reacted to calls to arm the Syrian rebels or to impose a no-fly zone, but he has threatened military intervention if the Assad regime makes a move to employ its arsenal of chemical weapons against its population.

But the issue is looming larger as the American presidential election campaign gains heat.

A senior aide to Republican challenger Mitt Romney lambasted Obama Friday morning for “dragging his feet” on Syria, and promised that a Romney administration would do more to assist the Syrian opposition.

The Syrian uprising began in the wake of the revolts in Tunisia, Egypt, Yemen, Bahrain and elsewhere that became known as the “Arab Spring.”

More than a year later, this is no longer the case, she conceded.

“As a result of the violent and criminal behavior of the regime, it has grown into an armed uprising,” she said.

According to a study conducted by The Washington Post, more than 30,000 people have been killed in Syria since the conflict began.

Yazbek said that even these figures are optimistic.

“More than 40,000 have really been killed,” she said. “We face massacres every single day. We are suffocating in a sea of blood while the world stands silent.”

The picture is complex, she emphasized, and the international community seems to have neither the time nor the patience to unravel it.

“It is not simply people who are for or against Bashar al-Assad,” she explained. “In any society people identify with their families, their religion, their sect. This is part of culture.”

But she flatly denies that the Syrian uprising has turned into a sectarian conflict, pitting the majority Sunnis against the ruling Alawites.

“Before the uprising there was no real sectarian tension in Syria,” she insists. “I always thought Syria would be a model for peaceful co-existence.”

The regime is now trying to sell the world a story that the uprising is made up of radical Islamists, members of the Salafi sect, intent on imposing an extremist Islamic state in Syria, Yazbek said.

“These are the lies of the regime,” she said. “It is the government that is facilitating the entry of Salafists into Syria in order to discredit the uprising.”

While the Assad regime is getting help in the form of weapons and cash from Iran, and the Salafists are being financed “from several Gulf countries,” as Yazbek puts it, the real opposition is standing alone.

“The opposition is weak, they have only very light weapons,” Yazbek said. “They are being destroyed from the air.”

She pleads for a no-fly zone, of the type that was imposed in Libya during the uprising that ultimately toppled Muammar Gaddafi. The opposition also needs some anti-aircraft weaponry, she says.

But Yazbek is adamantly opposed to any direct intervention in Syria.

“We do not need foreigners on the ground,” she said. “We Syrians will liberate our cities ourselves. But we need help. We need the world to stop the killing.”

As to what could come next, Yazbek is vague but optimistic.

“Once the bloodshed has stopped we will have democratic elections,” she said. “Whatever the people decide, we will support. When the massacres have stopped, the real revolution can begin.”