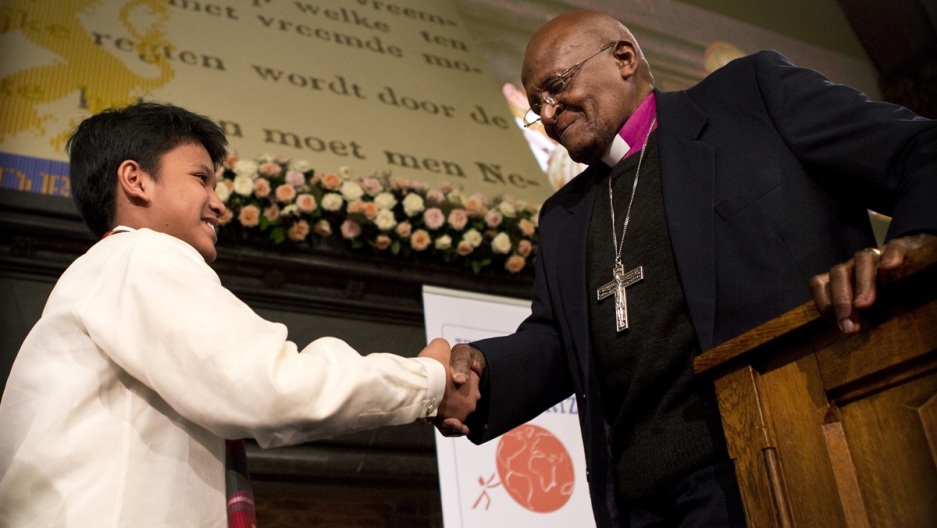 South African Archbishop Desmond Tutu shakes hands with Philippine's Philippine Kesz, 13, after awarding him with the Children's Peace Prize at the Ridderzaal in the Hague on September 19, 2012. A
Credit: AFP
Share

Thirteen-year-old Filipino Cris “Kesz” Valdez hasn't had it easy in life. Forced to scavenge at a dumpsite since the age of two, he was viciously abused, and had to run away to seek outside help after he was badly injured.

Now, he's the recipient of the Children's Peace, a $130,000 annual award given to children who have come up with remarkable ideas for helping others. Kesz was personally handed the award at a formal ceremony at the Hague by Archbishop Desmond Tutu, no slouch himself in the charitable world.

Chosen from three finalists, young Kesz parlayed his rough early experiences into something extraordinary, beginning an organization called "Championing Community Children" at the tender age of 7.

Read more from GlobalPost: Desmond Tutu: Blair, Bush should 'answer for their actions' in Iraq war

Kesz and other young Filipinos go into Manila's slums and dumps to give out gift parcels and mentor others, reports AP, handing out in the area of 5,000 gifts to date, and educating around 10,000 others on health, hygiene, and their own rights.

“My message to all children around the globe is; our health is our wealth! Being healthy will enable you to play, to think clearly, to get up and go to school and love the people around you in so many ways," says Kesz in a statement on the Children's Peace Prize website.

"To everyone in the world, please remember that every day, 6,000 children die from diseases associated with poor sanitation, poor hygiene, and we can do something about it! Please join me in helping street children achieve better health and better lives.”

At the ceremony honoring Kesz, Tutu and Dutch children's charity Kidsrights announced the launch of Remember 2015, a campaign aimed to remind the world of as-yet-unmet Millennium Development Goals, initially set in 2000—especially when it comes to the rights and interests of children.