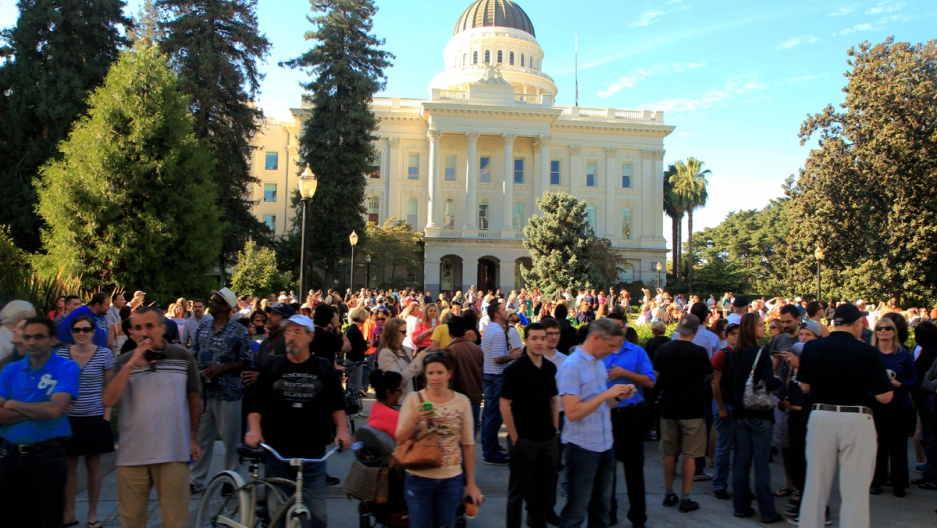 SACRAMENTO, Ca — Why was half of Sacramento, California, looking expectantly up at the sky early Friday morning? Blame retired space shuttle Endeavour, which buzzed the California State Capitol at around 9:50 a.m. on Friday morning, delighting hordes of expectant NASA watchers.

State government staffers jostled on the nicely-located balcony of Sacramento's centrally located Capitol building, office-dwellers climbed out on their roofs, and average Sacramentans of all stripes arranged themselves in parks and baseball diamonds near downtown, looking up, their smartphones at the ready.

Business downtown? What business? This was the last, triumphant stand of one of humanity's most impressive achievements ever, and pushing paper and making California-friendly organic lattes was going to have to wait, at least briefly. It was a collective endeavour, if you will.

The shuttle, which left its usual location in Florida on Wednesday and had spent the night at Fort Edwards airforce base in the Mojave desert Thursday, was supposed to arrive at 9:40 sharp.

But although NASA can predict to the minute when the vessel will launch into the stratosphere, a planned buzz of California is a less precise art — it arrived about ten minutes late.

The shuttle was originally slated to fly over Sacramento at 8:30 a.m. Friday, but morning fog in San Francisco — not exactly a shocking development — pushed the flight back a few minutes.

The expectant Sacramento crowds were eventually rewarded, however: a monstrous buzz in the sky signaled Endeavour's arrival, and everyone frantically looked up, snapping iPhone photos, holding their kids aloft, and bringing a temporary hush to the busy downtown area.

For the last stand of a technological legend, it was a pretty darn good turnout. Who knows when we'll see such a thing again?

Endeavour arrived in Los Angeles this afternoon after buzzing San Francisco, where it will be installed in its final resting place at the California Science Center in Los Angeles — providing hordes of fidgety schoolchildren with the chance to learn more about the space program (and maybe advocate for more funding in the future).

Tech-savvy Californians busily reported their sightings on Twitter, using the #spottheshuttle hashtag — and allowing the shuttle's progress to be tracked with remarkable, crowd-sourced accuracy.

Earlier this year, retired space shuttle Intrepid was donated to the Intrepid Sea, Air and Space Museum in New York City, after performing a similar swan-song flight for the benefit of the public, according to the New York Times.

Why are the shuttles being retired? NASA launched its last space shuttle in May 2011, and shelved the program that caught the imaginations of much of humanity, citing budget and structural concerns, according to the New York Times, and putting many former NASA employees out of work.

If you're wondering what exactly the space shuttle is riding on, wonder no more: it's a specially modified Boeing 747 shuttle carrier aircraft.