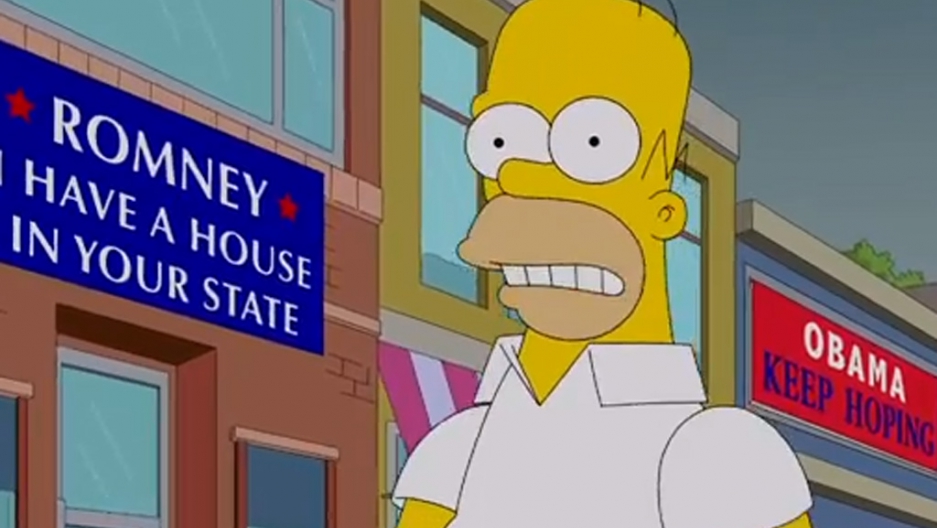 Well, what else would you expect from a “40-year-old white guy who didn’t go to college and gets all his news from monitors at gas stations?”

This same man once taped up his tax return into the shape of a football so he could throw it into the post office before midnight on deadline day.

He ate himself into oblivion to work from home, swallowing a Play-Doh donut to crack the elusive 300-pound barrier.

If there ever was a voter who you might throw into the 47 percent of Americans “dependent upon government, who believe that they are victims, who believe the government has a responsibility to care for them,” it might be Homer Simpson.

He wasn’t happy about it.

“Oh, man, not another election. Why do we have to choose our leaders? Isn’t that what we have the Supreme Court for?”

Right up until the end, Homer just wasn’t sure.

En route to the polling station, Homer weighs Barack (“keep hoping”) Obama and Mitt (“I’ve got a house in your state”) Romney.

“Barack Obama? I don't know,” Homer says inside the voting booth. “I’ve already got one wife telling me to eat healthy. And, plus, he promised me death panels and grandpa is still alive.

“Mitt Romney? I hear he wears magic underpants. I expect the leader of the free world to go commando. Plus, his horse totally choked at the Olympics. On the other hand, he did invent Obamacare.”

The benefit to voting GOP is, Homer gets to read Romney’s tax return, but is horrified to learn he “has six wives all named Ann” and the "government paid HIM taxes for five years.”

That’s the last straw, and Homer vows to tell the press, except a suction tube appears under the electronic voting machine and transports Homer to a Chinese factory producing American flags.

“At least I have a steady job.”

More from GlobalPost: Obama on Letterman: You have to work for everybody