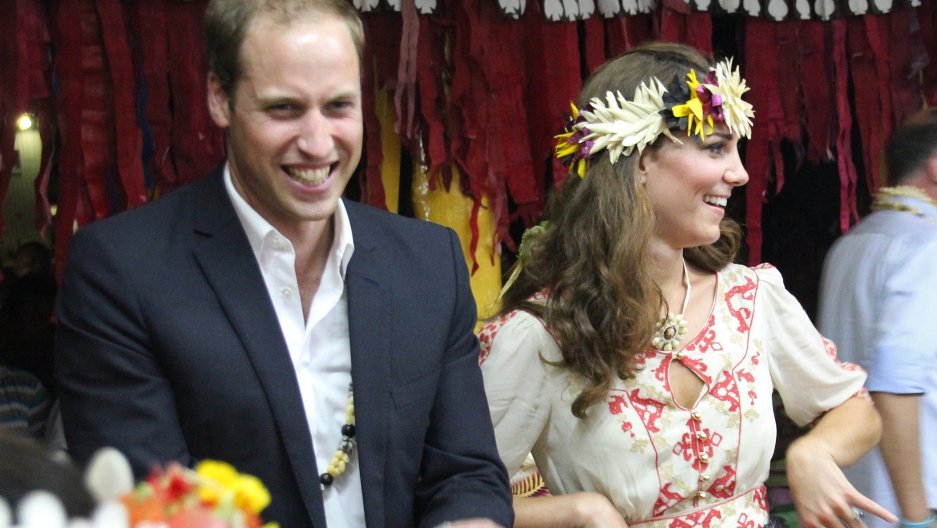 Prince William and Kate Middleton have tried to appear above the fray on a visit to the Solomon Islands this week while their lawyers were busy back home.
Credit: Tony Prcevich
Share

LONDON, UK — If you live outside Britain, you can be forgiven for thinking — in the wake of the publication of topless photographs of Kate Middleton — that the UK is a nation of outraged patriotic citizens furiously waving Union Jack flags in protest at the treatment of their future queen.

As Prince William successfully pursued an injunction this week to halt further publication of images of his sunbathing wife that first appeared in France’s Closer magazine and have been reprinted in Italy and Ireland, the outcry in the British media seems to suggest as much.

“It’s a Kate crime,” the tabloid Sun punned furiously from its front page. The Daily Mail decried the “Grotesque!” snapshots and reported the royal family’s fears that the media would turn Kate into a “new Diana.”

Such anger will probably be stoked further by wider circulation of the offending images on the internet and this week’s decision by the Danish celebrity magazine Se og Hoer to print a 16-page spread to explain “what these photos are all about.”

It’s easy to believe the indignation applies to Britain as a whole. Especially after millions of devoted Britons were seen eagerly celebrating both a royal wedding and the 60th anniversary of their queen’s reign in the past two years.

Such devotion can be baffling to outsiders who, although they may enjoy the pageantry of a royal celebration and the soap opera of a family always in the public eye, may struggle to comprehend why a democratic country would believe its queen has a divine right to rule.

But while some in Britain undoubtedly bestow mystic powers of infallibility on the somewhat interbred European aristocrats that Queen Elizabeth II counts as her ancestors, there are considerably more who are willing to hold her to account.

Academic scrutiny of the relationship between British citizens and their royalty is surprisingly thin on the ground, but Professor Michael Billig, a sociologist who tackled the issue in his 1980s study “Talking of the Royal Family,” says his findings still hold true.

As Prince Charles and his new bride Diana were subjected to the same attention that Prince William and Kate are undergoing today, Billig and his team crisscrossed the country asking family members if and why they supported the royals.

“We found almost general acceptance or belief that Britain is better off with the monarchy than without,” he said in an interview. “But we also discovered that there was a delight in criticizing members of the royal family and discussing them.”

Silent reverence, Billig said, was rare. Most interviewees indicated their affection for the monarchy would quickly evaporate if members were seen as failing to earn their keep.

“One aspect remains constant,” he added, “which is a sense that if any member of the royal family receives their privilege and wealth but doesn’t contribute back, they will be strongly criticized.”

That, according to Billig, has always been the case. Queen Victoria courted unpopularity in the late 19th century when she shied from public duty and decamped to Scotland. Prince Andrew’s then-wife Sarah Ferguson was widely disparaged in the 1980s for courting popularity. Even the beloved Princess Diana endured bouts of public disapproval for her affairs and perceived disdain for her in-laws.

Thus Prince Harry, although frequently photographed stumbling drunkenly out of taxicabs or notoriously snapped playing naked billiards in Las Vegas, can be forgiven because he is a serving member of the military currently deployed in Afghanistan.

Harry’s father Prince Charles, often accused of overstepping his remit, is given a rougher ride. This week, a judge ordered the government to publish letters from Charles some say may reveal his unconstitutional attempts to meddle in lawmaking.

The Duchess of Cambridge, as Kate is officially titled, has yet to make a serious transgression. So far the reaction from Britain’s streets, if not its media, to the publication of the topless photographs appears to be one of mild concern with a dash of prurience.

“Yes I’ve Googled [the photos], I reckon everyone has, just out of curiosity,” shrugged Kevin, a 28-year-old IT worker who declined to give his last name. “I suppose people could be upset by something like that, but I’m not going to go ‘you can’t do that to our royal family’ or anything.”

Others professed mild indifference to the royal family in general.

“I’ve never really thought about it — they’re just there,” said Sally Green, a trainee legal secretary. “They don’t do any harm, in fact they probably help bring in the tourists. I’m not crazy about them, but I can’t say I want to get rid of them.”

“They don’t make sense really,” he said, “but that’s usual for this country. I know some people want to get rid of them, but why not have them?”

Britain isn’t without republicans, as those against the monarchy are called. The pressure group Republic has campaigned for three decades for the abolition of hereditary systems it says are undemocratic, unaccountable and expensive.

But its members are in a minority. A poll earlier this year revealed that 69 percent of Britons believe the country would be worse off without the royals, compared to 22 percent who think otherwise. Satisfaction with the queen has never been higher.

While many of them may also be happy to criticize the royals, as Billig found, some fit the devoted, flag-waving images outsiders tend to entertain.

Among them is Margaret Tyler, a 68-year-old who named her son after Prince Andrew and whose London home is crammed with more than 10,000 pieces of royal memorabilia including, she says, a lock of Princess Diana’s hair.

“Whenever you meet the royal family, you know you’re in a different presence,” Tyler told GlobalPost. “I’ve met the queen four times and there’s definitely an aura about her. You never forget it.”