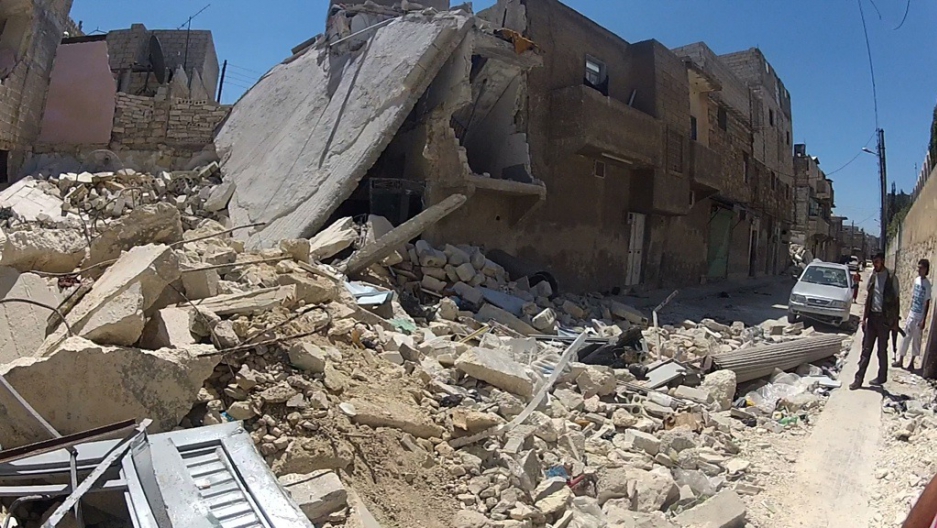 The aftermath of a bombing in the Hanano district of Aleppo, Syria.
Credit: Tracey Shelton
Share

The rebels said they planned to target the country’s public airports.

While it might seem antithetical to their cause to attack airports serving civilians, the rebels say they are left with little choice.

Facing a near constant barrage of regime attacks from the air, and little support from the international community to enforce a no-fly zone, the rebels are attempting — on their own — to cripple the government’s ability to launch airstrikes and move weapons.

The rebels say it is not enough to target only military airfields because the country’s two main civilian airports, in Damascus and Aleppo, are being used by President Bashar al-Assad for military purposes.

Russia, which has supplied weapons to Syria and has lobbied against international intervention on behalf of the rebels, condemned the strategy.

“We consider such threats absolutely unacceptable,” Russia’s foreign ministry said in a statement. “From a moral and legal point of view this means the opposition's critical proximity to a red line, beyond which are acts that are no different from the crimes of Al Qaeda.”

Attacks from the air, however, are now claiming more lives than the frontline battles between government and opposition forces, according to the Syrian Observatory for Human Rights. The United Nations reported this week that August was the deadliest month for civilians — with about 5,000 killed — in the 18-month old conflict, topping the deadliest months in both the Afghanistan and Iraq wars.

At one of Aleppo’s main trauma hospitals, volunteer medic Abdulrukman Halaq said an average of 70 to 100 patients arrive every day, most of the injured in airstrikes.

“Sometimes it’s 150, and the dead can number 50, 60, 100, or some days no one. It depends on crazy Assad,” said the 24-year-old veterinary student as he patched up the wounds of a screaming child, injured in the latest air raid. “Most injuries are from the MiG and the mortar fire. The MiG is the worst. Those bombs are so big. One can kill so many people.”

The airstrikes have also helped exacerbate the country’s refugee crisis. More than 100,000 Syrians fled the bombing campaign in August alone, according to the United Nations.

Capt. Wasel Ayoob, a former regime fighter pilot who defected seven months ago, is now leading a push to take one of Aleppo’s three military airports.

“If we take the airports it will be a real kick against Bashar, but it will not stop the bombing,” he said. “They will keep sending planes from another area, but it will be so much more expensive. It will not be easy for them.”

His battalion, known as Noor al-huk, is led by former air force personal.

“We do not like the idea of destroying these planes. They are for the Syrian people. We want to control these units, not destroy them,” he said.

Ayoob said the daily bombings are primarily the work of the Russian-made MiG-23 fighter jets. He estimates the regime has about 130 of them. A Russian MiG can carry four 250-kilogram bombs, or two 500-kilogram bombs, that have a kill radius of about 600 meters in an open area.

More from GlobalPost: Video: Life and death on the frontlines of Aleppo

Watching a MiG-23 bomb the village of Mara, Ayoob’s wife, Rafah al-Huseni, described the pilot's routine, which has become all too familiar for her. She said the jets always circle around and drop a second bomb in the same location.

“You see, she goes down, down, down, so low,” al-Hunseni said as the jet maneuvered into a nosedive. Seconds later, a boom rang out in the distance. “Look, she will circle around … now she is diving down again with the second bomb.”

The two bombs struck only a few meters apart. The target appeared to be a civilian area, and several homes were destroyed. Two died and seven were injured in the attack. No sign of weapons or the Free Syrian Army could be found anywhere at the scene.

Ayoob said that sometimes the location for such attacks is chosen according to information provided by informants. But more often than not, he said, the pilots, fearing a rebel counter-attack, drop the bombs as quickly as they can and wherever they see a crowd of people.

The Free Syrian Army has had some recent success taking down regime jets. Mohammed Noor, communications manager for the Free Syrian Army in Azaz, a city that in recent weeks has been the scene of brutal air raids, said his group had shot down four jets mid-flight using limited-range anti-aircraft guns. Ten MiGs and 10 helicopters on the ground were also destroyed with rocket-propelled grenades during attacks on airports in Idlib province, Aleppo and Darazor, which is near the Iraqi border, over the past month, he said.

More from GlobalPost: Inside Syria: Not everyone hates Bashar al-Assad

But such achievements have had little impact on the daily bombardments. As Noor spoke, a call came in to confirm the death of 20 people in an airstrike on nearby al-Bab city.

“All of the attacks in this region are by air,” said Dr. Abu Mohammed, a leader of the opposition forces in al-Bab, a city under rebel control since July. “Assad’s army cannot send ground troops here. Fighting man-to-man they are very weak. They hide behind their tanks and aircraft. If a no-fly zone were imposed, I believe the story would be finished in one or two weeks.”

While Capt. Ayoob agreed, he doubted there would ever be international help.

“With a no-fly zone we would be free to attack their positions. We would quickly control the situation and so many lives and so much damage would be prevented,” he said.

“But all this is just talk. They play with our blood. More than 26,000 people are dead. Until now, no one cares. Why would they change now? No, it’s up to us alone to end the killing.”