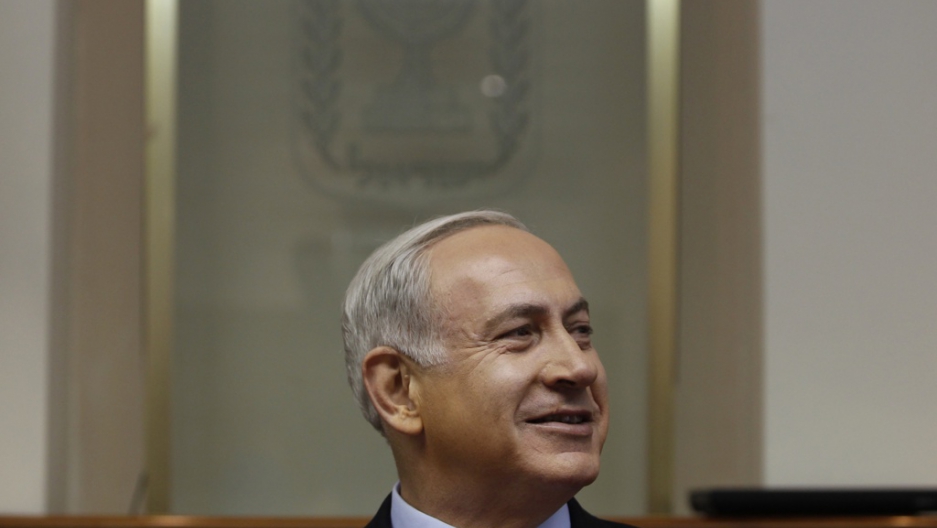 JERUSALEM — Israeli Prime Minister Benjamin Netanyahu devoted a series of unprecedented pre-Rosh Hashanah appearances on American TV programs to promote the same two-pronged idea he has been touting with growing vehemence in the Israeli media: that Iran is coming closer and closer to achieving nuclear viability, and that US President Barack Obama is allowing it to happen.

On Meet the Press, Netanyahu said Iran was "20 yards from a bomb."

Netanyahu has repeatedly called for Obama to declare his "red lines," or, in other words, to put his cards on the table when it comes to Iran. In an hour-long phone call on Tuesday, Obama responded that he intended to do no such thing.

Republican challenger Mitt Romney wasted no time in announcing that he and Netanyahu share the same vision of the "red line" on Iran.

Netanyahu's tactic, unparalleled in Israeli-American history, and the tone, may be backfiring, as a growing chorus of Israelis and Americans question the soundness of Netanyahu's approach.

Shaul Mofaz, Israel's mild-mannered opposition leader, seemed to find his verbal footing this week as he asked the question more and more are asking: What exactly is the prime minister up to?

"Prime Minister, tell me, who is our biggest enemy, the US or Iran? Who do you want replaced, Ahmadinejad or Obama?” he asked from the floor of Israel’s parliament.

“How low are you prepared to drag relations with our closest ally?”

Israeli and American commentators have virtually tripped over themselves to question Netanyahu's judgment as he forces Obama into a public fracas with what amounts to America’s closest ally in the Middle East.

In Ha’aretz, the Israeli daily, veteran political commentator Yossi Verter quoted a senior Israeli political figure describing an almost unimaginable blunder on the part of Netanyahu: actively attempting to support the Romney candidacy by using Iran as a wedge issue.

Netanyahu "was in a state of mind that said that he and [Romney donor Sheldon] Adelson were in control of the American political scene,” the source was quoted as saying. “He hoped that his threats would scare Obama on the eve of the elections. But he is finding that the administration is sticking to its guns. They are not getting stressed over there in America. They are not dancing to the tune of the prime minister of Israel. Bibi's strategy is collapsing."

American political commentator Joe Klein, a supporter of Israel, referred to Netanyahu's tactics as "brazen" and "disgusting" in a recent NBC interview.

Back in Israel, yet another commentator, Bradley Burston, suggested that “Netanyahu must set red lines on his malice toward Obama. And soon. If deadlines are in order, Netanyahu might consider his upcoming US visit as an opportune moment to shut down entirely the verbal centrifuges he has set spinning in attacks on the president."

Netanyahu has been walking a thin line since Romney's visit in July. Many observers interpreted the welcome Netanyahu accorded Romney, which included all the trappings of a state visit, to be all but an endorsement.

In a sign of extreme anxiety, senior Israeli officials are coming closer and closer to questioning Netanyahu's ability to lead the country on the subject of Iran, and much of the discussion is occurring over American airwaves. In a cautionary interview with 60 Minutes, former Mossad Chef Meir Dagan said a unilateral Israeli attack against Iranian nuclear facilities would be "the stupidest idea.”

Contradictory messages issued by senior Israeli figures also display the level of nervousness in Jerusalem. Foreign Ministry officials allied with right-wing Foreign Minister Avigdor Lieberman blame the United States for ignoring radicalization in the Muslim world in general, whereas aides to the more moderate defense minister, Ehud Barak, say no unilateral attack is in the offing.

Lost in the murk of gamesmanship, of course, is potentially the greatest danger now facing the Western world.

In an unusually detailed warning on Saturday, Iran's top military commander, Gen. Mohammad Ali Jafari, the head of the Revolutionary Guard, asserted that “nothing will remain” of Israel if it took military action against the Islamic republic’s nuclear installation. He added that if attacked, Iran would also block the strategic Strait of Hormuz and hit US bases in the Middle East.

Netanyahu and Obama do not appear to be far apart in their interpretations of the threat posed by a nuclear Iran. Former US ambassador to Israel Martin Indyk, who has strong ties to the Obama administration, said Sunday on CBS that he doesn't think "the difference between Netanyahu and Obama on this is that great, in terms of the president's commitment not to allow Iran to acquire nuclear weapons."

Indyk asserted that Netanyahu's demands for a public “red line" announcement by Obama is an “unreasonable” requirement.

“The idea of putting out a public red line — in effect issuing an ultimatum — is something that no president would do. If you noticed, Gov. Romney is not putting out a red line; Senator McCain didn't, either. And neither is Bibi Netanyahu for that matter, in terms of Israel's own actions."

Alon Liel, a former director general of Israel's foreign ministry and one of its most experienced diplomats said that Netanyahu's confrontation with the United States "is not his worst sin."

(That, according to Liel, is "Netanyahu forsaking Israel's future by ignoring the Palestinian issue for three and a half years.")

"Bottom line, I think Netanyahu is frightened and scared, and feels that the fate of Israel rests on his shoulders. This is not all a show. In addition, I think he feels he is helping Romney by whipping up Israeli-US tensions. He understands Romney is in bad shape and thinks he is making things uncomfortable for Obama this way."

Of course, Liel says, this is a high stakes game of risk. For now it appears Obama is likely to win the election, "and then there will be the price to pay. Not on Iran. Those differences will disappear after the elections, but on every other issue, Obama will exact his revenge."

For example, "Obama will not lift a finger to support Israel when the Palestinians request to be recognized as a sovereign state at the UN, and we will lose 150 to 15."

Liel, the former diplomat, resists the urge to question Netanyahu's fitness as other Israelis are doing.