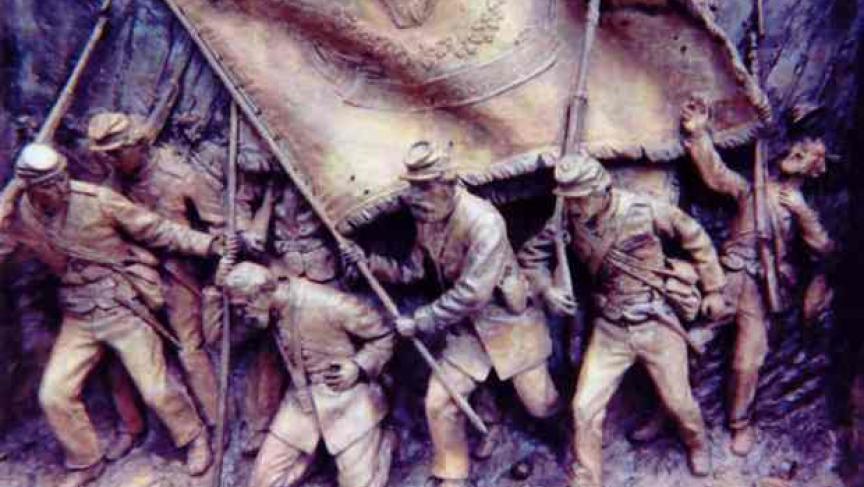 The Monument to the Irish Brigade at Antietam. (Photo: Wiki Commons)

Share
A ceremony was held Monday in a small town in western Maryland to remember the bloodiest day in American history. One-hundred and fifty years ago, on September 17th 1862, a Union army led by General George B. McClellan attacked Robert E. Lee's Confederate forces along Antietam Creek, near Sharpsburg, Maryland. The Union didn't win outright, but rebel forces were forced to retreat the next day. The human cost, to both sides was immense. Twenty-three thousand men were killed, wounded or went missing that day. Never before, or since, have so many Americans fallen in battle in a single day. The "victory" allowed President Lincoln to issue the Emancipation Proclamation a few days later, freeing the slaves in the rebel states. Those are the well-known facts about the Battle of Antietam. One of the not-so-well-known facts is how many of those who fought that day were foreign-born. The attack on one key rebel position, a sunken road, was led by the Irish Brigade, immigrants recruited by the states of New York, Pennsylvania and Massachusetts. Elsewhere, the 79th New York Regiment was distinguished: they were Scottish Highlanders, complete with bagpipes. Germans formed a huge proportion of the Union troops. An entire Corps of several divisions was formed of German volunteers, and every order from the general down to the lowest corporal was given in German. Complaints about such bilingualism in the military were overruled by Lincoln. Major Leopold Blumenberg, a Jewish immigrant from East Prussia, led the all-German 5th Maryland Regiment against a position held by the 12th Alabama, led by another German Jew, Captain Adolph Proskauer. Overall, immigrants made up 25 percent of the Union army in the Civil War: that's a far greater proportion than immigrants made in the general population. According to Patrick Young, a history blogger and immigration advocate, many joined because of their opposition to slavery. Others, Young says, were always writing about how the United States was the only hope in the world for freedom and democracy – what they called republicanism. "Princes and Kings would rejoice," Young quotes foreign born soldiers as saying, "if the United States were split apart." Young says the war also transformed the place of immigrants in the minds of many native-born Americans, at least in the north.