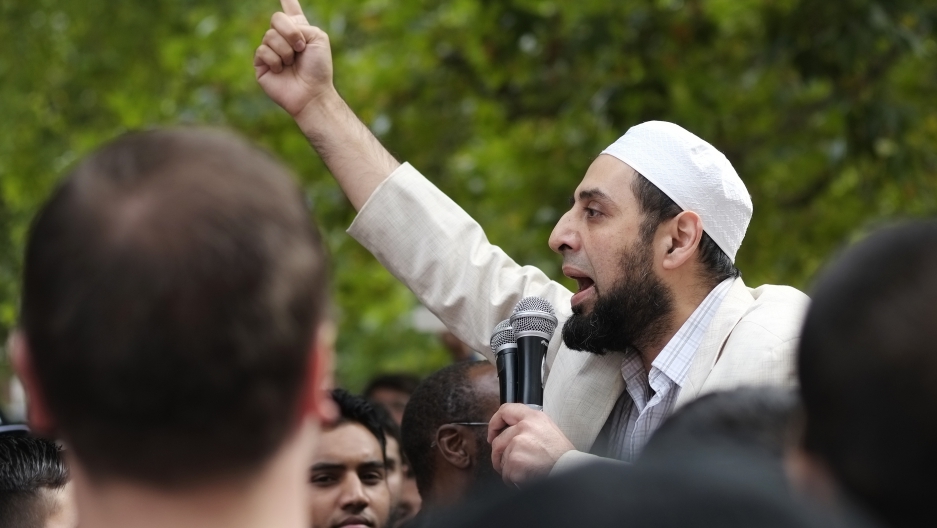 Muslims protest outside the US Embassy in London on Sunday.
Credit: Leon Neal
Share

BRUSSELS, Belgium — The rage over a US-made anti-Islamic video spread to Europe over the weekend, when clashes took place between protesters and police in several cities even as mainstream Muslim community leaders joined European governments in condemning violence sparked by the film.

French police arrested 150 demonstrators who gathered outside the US embassy in Paris on Saturday and 250 protesters were detained in Belgium over the weekend after confrontations in the country's second city, Antwerp. Around 300 people chanted anti-US slogans outside the American Embassy in London on Sunday.

Muslim leaders in France and Belgium were quick to condemn the violence despite their outrage over the video, which mocks the Prophet Muhammad.

"Don't associate French Muslims with these marginalized events," said Mohamed Moussaoui, president of the French Council of the Muslim Religion. "Muslims should use legal and just means to defend their religion."

More from GlobalPost: Calm returns to Cairo: Now what?

European governments have been united in condemning the anti-American violence in several mainly-Muslim countries and have expressed their support for Washington following the killing last week of J. Christopher Stevens, the US ambassador to Libya.

European media followed a similar line. "When US flags burn, embassies are vandalized, and diplomats are murdered, it is an attack on the West, and not just America," wrote the German tabloid Bild.

Behind the scenes, officials said European countries were putting diplomatic pressure on Muslim governments to condemn the violence, attempt to defuse anti-US tensions and increase security at Western embassies.

European diplomats noted that Egypt's Islamist President Mohammad Morsi finally issued a statement condemning the attack that killed Stevens after holding talks with European Union officials in Brussels on Thursday — although an angry phone call from US President Barack Obama is reported to have helped persuade Morsi to speak out.

Despite the support for the United States, however, there is concern in Europe that the scale of anti-American feeling unleashed by the low-budget video represents Obama's failure to reach out to the Muslim world, and that his re-election prospects may be jeopardized.

Karim Emile Bitar of the Institute for International and Strategic Relations in Paris warned TV coverage of the recent attacks could produce an effect similar to 1979’s assault on the US embassy in Tehran, which was followed by a drawn-out hostage crisis.

"My first reaction, when I saw the images coming out of Egypt and Libya, was to ask if Barack Obama risked ending up like Jimmy Carter," Bitar told France 24 television. The hostage crisis is believed to have cost Carter re-election the following year.

"What's worrying now is that these incidents could allow the radical right in America to get ahead in the debate, using stereotypical caricatures of the Muslim world."

That prospect worries people on a continent where a poll published last week showed 71 percent approve of Obama's foreign policy.

However, analysts said Europeans hope the violence will fade. They stressed it's too early to speculate over American and European support for Arab Spring revolutions that toppled dictators who had kept a lid on Islamist extremism in countries such as Libya, Tunisia and Egypt.

“I don't think that we're seeing, for the moment, any kind of wider misgivings about whether Europe was right to support the revolutions,” said Anthony Dworkin, a US foreign policy specialist at the European Council on Foreign Relations. "America confronts deep-seated suspicion across the Middle East and these things develop over time," he added in a telephone interview from London. "This is not just about Obama."

Although European governments have been united in their condemnation of the violence provoked by the “Innocence of Muslims" video, officials said they would probably disagree about whether to ban such provocative works.

The ongoing unrest is rekindling debate from 2005, when cartoons representing the Prophet Muhammad also provoked violent protests after they were published in a Danish newspaper.

EU counties were divided back then between those who supported calls for international restrictions on what’s perceived as insults to religion and others who backed freedom of speech regardless of the offence it causes believers.

Germany has now barred Terry Jones, an American evangelist preacher who supported the film, from entry and Foreign Minister Guido Westerwelle is seeking to ban a far-right group from organizing a screening of the film.

"Insulting other religions is prohibited by the criminal code," he told ARD television on Sunday. "There are also questions of maintaining public order and the public peace."