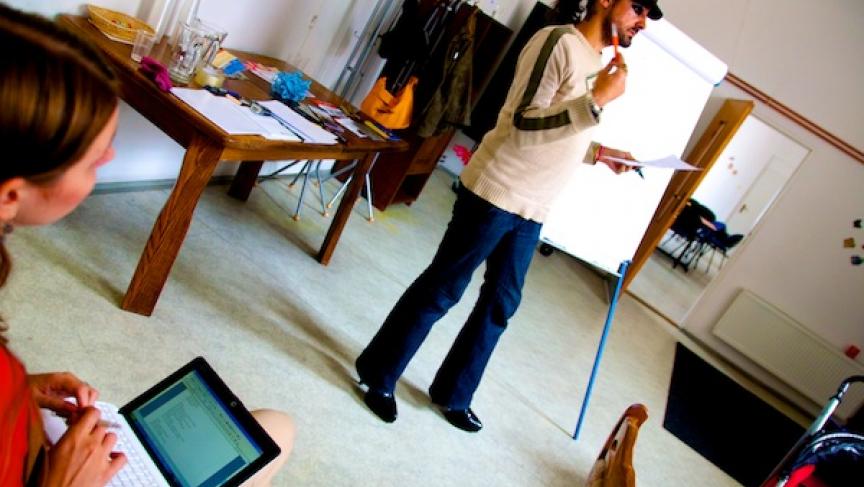 Employees at Pragulic train their tour guides on what to say on their tours. (Photo by Tomáš Česálek.)

The Velvet Revolution propelled Czechoslovakia on a path that eventually led to the country peacefully spitting into two: the Czech Republic and Slovakia.

But Prague, the Czech capital, with its castles, bridges, Jewish Quarter and Old Town Square is more popular with tourists.

And its home to a new tour company that’s come up with a new spin on the traditional walking tour of the Bohemian city. It employs homeless people as guides who show tourists the rougher side of life.

Prague’s pleasant Bohemian atmosphere attracted more than five million tourists last year. Pragulic, a combination of Prague and the Czech word for “streets” employs homeless people living in the capital as guides. They take visitors to the places behind the crowded landmarks to tell their story of life on the streets.

Petr’s tour starts on a square surrounded by drab socialist housing in a Prague suburb.

A children’s fair now draws a crowd, but he has less joyful memories of the area. It’s where Petr used to “mine for food” as he describes it, in the nearby garbage bins.

He said police were less likely to bother him here than if they caught him rummaging through dumpsters in the city center.

Petr takes his tour to a fountain in a public park where he used to collect water. He talks about having periodic jobs, but said he still often ended up sleeping in empty wagons at the train depot.

As in many cities reeling from the global economic crisis, homelessness in Prague is on the rise, up seven to eight percent over last year. Local charities estimate there are some 4,000 people living on the street.

Wearing thick smudges of black eyeliner and bangle bracelets that clang together when she gestures, Karim, a homeless transvestite and former male prostitute, tells a tour group about her struggle to kick a drug habit.

Half the price of each $10 tour ticket goes directly to the guides.

Pragulic co-founder Tereza Jureckova said they use the rest of the money on training for the guides. Jureckova hopes Prague’s notoriety as a tourist draw will go at least a little way toward mitigating the problem of homelessness.

A man named Lukas took Karim’s night tour with a group of friends from his university, and was surprised to learn about the underbelly of the city he thought he knew well.

“Honestly, I didn’t know what exactly to expect. I have to say it was really interesting because for me it was something like a journey to a completely different world, or underworld I should say,” Lukas said.

Petr is now married with a young daughter. With what he makes from these tours, and some state benefits, he’s able to afford a small apartment.

He hopes that his story will help educate visitors about the day-to-day realities of homeless life.