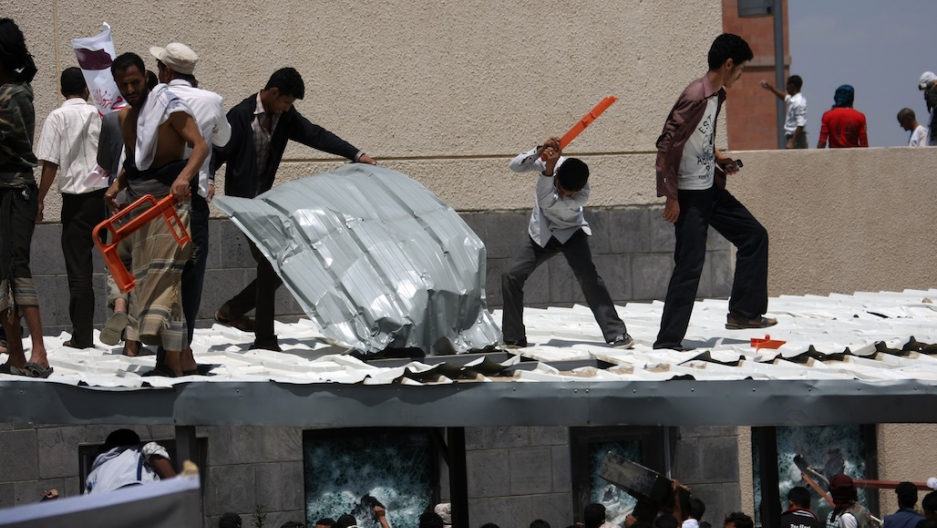 Yemeni protesters try to break through the US embassy in Sanaa during a protest on Sept. 13, 2012. Yemeni forces managed to drive out angry protesters who stormed the embassy in the Yemeni capital, with police firing warning shots to disperse thousands of people as they approached the main gate of the mission.
Credit: MOHAMMED HUWAIS
Share

Protests that began at a US Embassy in Cairo on Tuesday have now spread to the US post in Sanaa, Yemen, where demonstrations are believed to have been sparked by an anti-Islam film trailer posted to YouTube.

But Yemen has more reasons than an offensive 14-minute video to be upset with the United States. We asked Jeb Boone, who has reported for GlobalPost from Yemen and was formerly a managing editor at the Yemen Times, for his analysis of the protests' significance.

Why are Yemenis so angry at the US?

Frustration with the US has been building up for some time now, and probably has very little to do with the film controversy. They're incredibly angry with the US over civilian deaths in drone strikes and how the State Department handled the uprising, supporting a settlement that granted former president Ali Abdullah Saleh immunity from prosecution.

Why do you think this is the moment for that anger to get expressed?

It may simply be a case of the film being the straw that broke the camel's back. There are also unconfirmed reports of a prominent right-wing religious leader and the Houthi Rebels urging people to demonstrate in front of the US Embassy. I believe a few journalists received an email from Abdul Malik al-Houthi, the titular head of the Houthi Rebels.

Would you say these protests represent the feelings of mainstream Yemenis, rather than fringe groups, as they reportedly have in Egypt?

The individuals that made their way to the embassy [in Yemen Thursday] may be on the fringe, but the demonstration was definitely a symptom of growing anti-US sentiment. Drones strikes aren't letting up in Yemen, civilians are being killed and that's no secret to most Yemenis.

Who are those drone strikes meant to be targeting?

Members of Al Qaeda in the Arabian Peninsula. There were reports earlier this week that the No. 2 commander of AQAP, Said al-Shihri, was killed in a drone strike. He's also been reportedly killed a few other times, so I'll remain skeptical until AQAP releases a martyrdom announcement.

How do you expect to see these protests playing out in Yemen? Will they grow, die down, truly pressure the US in any way?

Whether or not they manifest themselves into more protests at the embassy, anti-US sentiment is higher than it's ever been simply because Yemenis know that the US is conducting drone strikes in their country and killing civilians in the process. Ambassador [Gerald] Feierstein is reviled for that and for the fact that Saleh remains a free man. Many are demanding his resignation. Until the [Obama] administration reevaluates it's policy of targeted assassinations in Yemen, the frustration will only intensify.