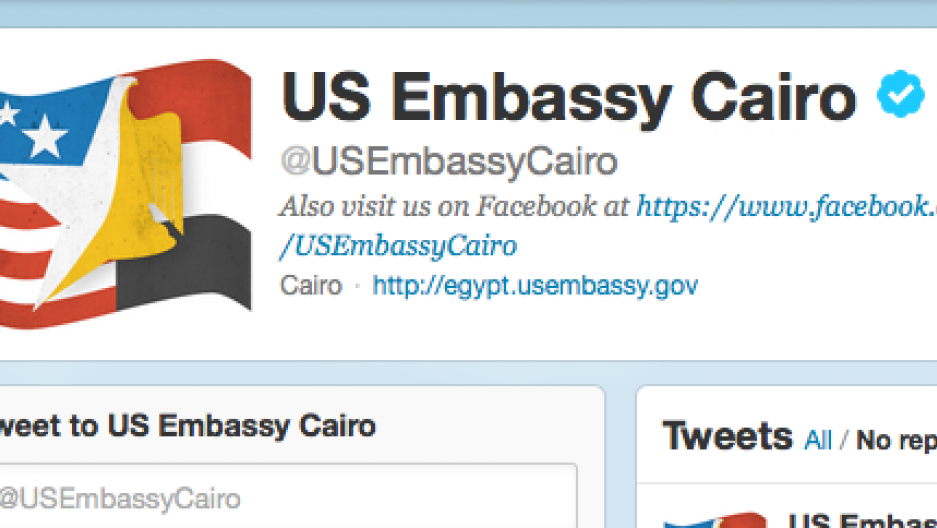 Amid spreading protests in the Middle East and North Africa against an anti-Islam film and the killing of a US ambassador and three other Americans in Libya, the US Embassy in Cairo's Twitter feed has found itself in the spotlight for its assertive and at times even aggressive tweets.

The feed has proclaimed US opposition to religious bigotry and called out the Muslim Brotherhood, which backs the Egyptian president, for putting out conflicting messages in English and Arabic. The feed, which has more than 25,000 followers, has also been caught up in the US presidential fight just two months before the election.

GlobalPost senior correspondent Erin Cunningham, who is based in Egypt, offers some insight into this Twitter unrest. Scroll down for a Storify of the saga.

Have you noticed a shift in the US Embassy's Twitter tone this week? Have they always been so assertive, or is this new?

Cunningham: The assertive nature of the US Embassy’s Twitter tone this week is definitely something new. The feed has never been an automated list of boilerplate tweets, but this tone is definitely more assertive and feisty than it was previously.

Does the US Embassy's Twitter feed play a big role in the Egyptian Twitter community? Do the Embassy staff members often inject themselves into political discussions?

Cunningham: I’ve never seen them enter an outright political discussion or debate, but they do often engage with readers. They answer questions about US policy or services at the embassy. Previously, they’ve live-tweeted open roundtable discussions they’ve had with activists. It’s definitely an engaging feed ­– more so than say the US Embassy feed in Kabul – but not blatantly political.

What do you know about who is behind the Embassy's Twitter feed?

Cunningham: From what I know from other news reports, a senior public relations official named Larry Schwartz oversees the Twitter feed and is the one who published the initial tweets that prompted Romney and others to condemn the State Department for ‘sympathizing’ with the attackers. I’ve never spoken with him directly, however. And the first time I heard his name was following the mishap.

How does the assertive tone on Twitter compare to the Embassy's tone on other platforms?

Cunningham: It’s different, but I would say it doesn’t surprise me. Given the level of engagement the US Embassy’s Twitter feed had earlier – with sometimes pithy comments, and personalized responses to Egyptians in the Twitter community – it seems like an easy jump to the more assertive tone it took with the Muslim Brotherhood feed today. Seems to me, however, that the two sides should be engaging in much more high-level talks than Twitter mentions.

What about the Muslim Brotherhood's feed? It sounds like they send out very different information on their English feed from their Arabic feed. What does this say about the Brotherhood in general -- are they known to change their messages based on the audience?

Cunningham: That’s long been a criticism of the Muslim Brotherhood media machine. They’ve been around for a longtime, and despite their inexperience in governing, they’re learning well how to tailor their political message to different audiences. The rhetoric is often much different in English and in Arabic, both on their feeds and on their sites. For example, for an international audience, they promote much more cosmopolitan and conciliatory tweets or statements that align well with the messages of political freedom and human rights. In Arabic, their tweets are much more tailored to the Egyptian domestic scene, sometimes seizing on a particular popular sentiment or more Islamist orientation that anchors them more to the Egyptian local context.

Given how big a role Twitter has played in Egypt's revolution and political turmoil, do you think this says anything noteworthy about how Twitter is used in Egypt? Is the tone on Twitter different among Egyptian communities than US ones? Is the etiquette different?

Cunningham: Twitter did and does play a role in Egypt’s continued political turmoil, but the percentage of Egyptians ­– of which there are 90 million around the world ­– on Twitter is actually quite low. But I think the Muslim Brotherhood understands that a lot of what is said on Twitter, by activists, international journalists, and others, is what ultimately gets heard by the international community, whether its reflective of the larger Egyptian sentiment or not. So regardless of how many Egyptians use Twitter, they understand that it’s a gateway to the international community, and I think that definitely affects the way both sides use the site as a tool for rhetoric, for venting, and for political debate.

[View the story "US Embassy attacks: A war of words on Twitter" on Storify]