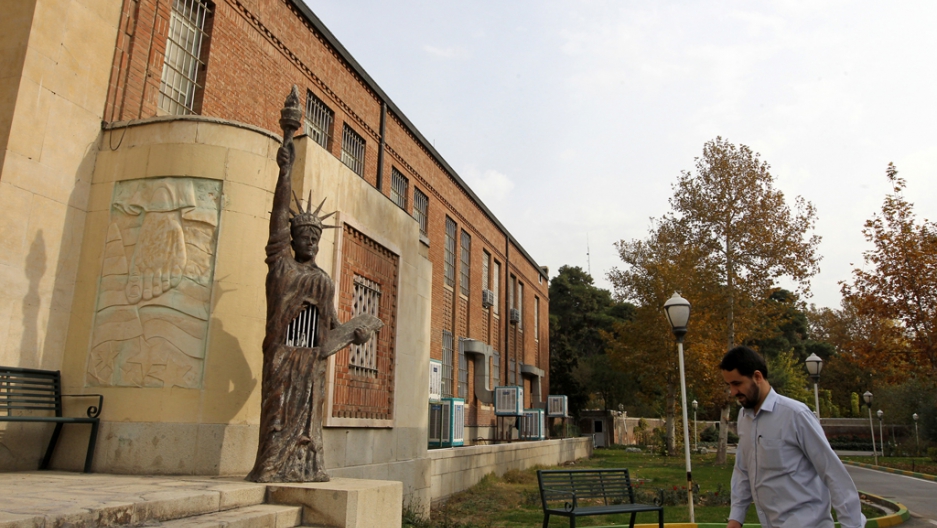 An Iranian man walks past a mock Statue of Liberty bearing prison bars outside the main building of the former US embassy in Tehran on November 19, 2011. The United States said Iran was now locked in 'unprecedented' isolation after UN bodies overwhelmingly condemned its nuclear programme and an alleged Tehran-planned terror plot.
Credit: Atta Kenare
Share

Iran has demanded that the USA "punish" the makers of the incendiary film "The Innocence of Muslims," as the amateurish video continues to incite unrest across the Middle East.

AFP reports that Iranian Supreme Leader Ayatollah Ali Khamenei called for US retribution against the filmmakers—on his website. (If you had no clue Khameni maintained a website—with an English version—you're not alone).

Read more from GlobalPost: US Embassy in Cairo Twitter feed gets feisty

"If the American politicians are honest that they had no role, then they must punish those who committed this heinous crime and their financial backers in proportion to this great crime," Khamenei said on his website, according to AFP.

Iranians have also been protesting the video, which some appear to believe is linked to official US sentiment regarding Muslims. They gathered outside the Swiss Embassy in Tehran, which serves as the protectorate of US interests after the USA pulled out following the 1979 hostage crisis, says Reuters.

The some-500 strong Iranians expressed their support for protests in Libya and Egypt, but were pushed back from the Swiss Embassy by Iranian police.

Read more from GlobalPost: Violent protests erupt at US embassies in Egypt, Yemen

It's been reported today that the supposed man behind "The Innocence of Muslims" is not Israeli-American Jew Sam Bacile, but instead  Nakoula Basseley Nakoula, a Coptic Christian.

Firebrand US minister Terry Jones of the Stand Up America center has also been singing the praises of "The Innocence of Muslims" - the same man behind the Koran-burning incident that caused dangerous riots in the Middle East last year.