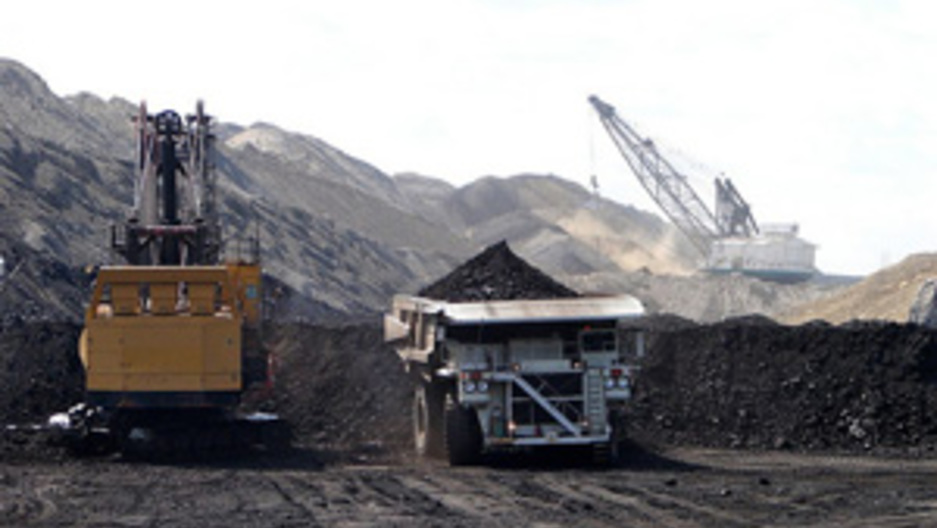 Coal Mine in Wyoming (Photo: eastcolfax/Flickr)

At the Black Thunder coal mine in Gilette, Wyoming, dump trucks the size of California bungalows rumbleout of an immense,300-foot deep hole in the ground, hauling away millions of pounds of dirt to get at the coal underneath. The Black Thunder is one of the largest open pit mines in the world. It looks like an ant colony under siege.

Almost half of the coal mined in the U.S. comes from this massive strip mine and twelve others like it here in the northeastern corner of Wyoming. The gaping holes in the earth ring the city of Gillette like a string of black pearls on the rolling grasslands of the Powder River basin, the jewels of the local economy.

The coal industry has transformed Gillette from a cow town into a boom town. Five thousand people work in the local mines, and the average income here is $60,000 a year.

But there’s concern that the good times might not last. Domestic demand for coal is falling fast—it recently hit a 40 year low—and industry leaders are concerned that the Gillette region could start to feel the pinch.

So they’re looking for new markets outside the U.S.

“The export market opens us up for additional market share,”says Black Thunder’s chief Keith Williams. “We would certainly want to increase market share if we get the opportunity to.”

Much of that opportunity lies in Asia, especially China, which has become the center of global coal demand. And the fastest way to get American coal to Asia is west. Problem is, there’s no good way to get it there. There are currently no coal export facilities on the U.S. West coast.

Right now, nearly all of the Powder River Basin’s coal heads east and south by train bound for power plants around the U.S. But the industry hopes to change that, and start sending hundreds of trains west over the Rocky Mountains and down along the Columbia River to five new coal export facilities proposed for the coast of Washington and Oregon.

The plan could be the salvation of Wyoming’s coal industry. But it’s got many in the Northwest rattled.

Ranker represents the San Juan Islands, a bucolic tourism spot near the coastal city of Bellingham, site of the largest of the proposed new coal terminals. With a capacity of more than 50 million tons, the new Gateway Pacific Terminal would bring almost 500 ships a year to this rocky stretch of coastline.

Ranker’s constituents worry that all of those ships, each carrying hundreds of thousands of gallons of fuel, will increase the likelihood of an oil spill.

“We’re going to see an environmental and an economic impact that will devastate Washington State,” Ranker says.

And it’s not just the possibility of a disaster on the water that has folks concerned. Opponents here and in Oregon say all that new train traffic will mean more air pollution, coal dust, noise and congestion, all to serve a market far beyond the U.S.

“The biggest thing is the jobs,” says Bellingham carpenter Mike Hardesty, whose lawn sports a sign showing his support for the Gateway project.

Backers say the five proposed coal terminals in the Northwest could create hundreds of long-term jobs, and several thousand jobs during construction.

“I’m definitely pro the work,” says Hardesty. “I want people to build houses and spend the money here. And not doing it, the money’s going to go somewhere.”

Gateway Pacific Terminal spokesman Craig Cole says the plan to ship coal to Asia is just what this region and the country need.

“Right now we need to sell whatever we can sell,” Cole says, “whether it’s a natural resource based commodity or whether it’s high tech… I’m kind of pragmatic. I think if we’ve got something that can fuel jobs, rebalance trade, we should take advantage of it.”

The question being debated here is whether the full cost of the coal export plan outweighs the economic benefits.

And along with the local concerns, there’s a very big global issue lurkingin the background.

Coal is the single largest source of global CO2 emissions.  And according to Stanford University coal expert Richard Morse that makes it really the heart of the climate problem. Morse says models predict global coal consumption will rise by 65 percent in the next 20 years or so.

The export terminals proposed for the Northwest would feed that appetite. That’s why climate activists and some local politicians have set their sights on stopping the big coal plan any way they can.

And it’s not just Northwest greens who are sounding the alarm.

Back in Wyoming, the sun’s setting as L.J. Turner walks along the creek near his red-roofed ranch house.

Turner’s family has been in the Gillette area for almost 100 years.  Today, he and his wife run red Angus cows and sheep on their ranch about ten miles from the Powder River Basin’s largest coal mines.

Turner’s no fan of the coal industry. He says it’s wrecked his water supply and gobbled up grazing land. He’s also worried about what burning fossil fuels is doing to the climate.

“The first winter that Dad was here in 1919, he said it never got above 20 below for six weeks” Turner says. “This last winter it froze up, but it didn’t freeze hard. We had green grass in February… It’s changing, it really is.”

Turner says burning coal is a problem no matter where it happens, but sending Wyoming coal across the Pacific is a definite step in the wrong direction.

“Whenever that coal gets exported to the orient you’re going to see it coming back over in pollution,” Turner says. “I don’t think anyone in their right mind wants that here but it’s going to happen, because this is a small world.”

That sentiment won’t earn L.J. turner many friends here in coal country, but it’s likely to reverberate throughout the debate over the planned northwest coal export terminals.