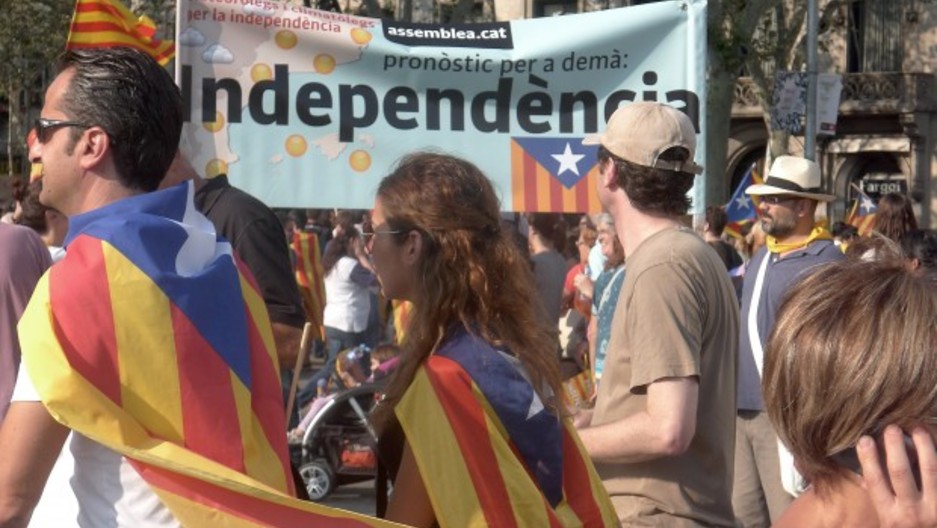 Share
In the Catalonia region of Spain, September 11th has a meaning very different from the United States. It's a holiday when Catalans celebrate their history and sense of national identity. But this year it's become a call for outright independence from Spain. Spain's ongoing economic crisis is straining relations between the central government and the country's semi-autonomous regions. The World's Gerry Hadden has just returned from a massive independence march in Barcelona. A million people. That's how big this march is supposed to get before it ends. That's nearly one out of seven Catalans. The region's never seen anything like this. The official slogan for this year's celebration is, "Catalonia: Europe's next independent nation!" Catalonia, like Spain's Basque Country, has had a movement for independence for centuries. But for the first time in modern history, polls suggest a majority of Catalans now want to secede from the Spanish union. The catalyst? More than anything, the economic crisis. Despite huge federal budget cuts, Spain doesn't have enough money to go around to pay for everything from schools to roads to hospitals. "We contribute more taxes to the state," said Barcelona resident Jordi Flor, "and we get less and less back." A woman named Rosa, listening in, got excited. "We're sick of Spain. It's over, Spain, Good Bye!" she said. Such rhetoric, this huge march, and Spain's three-year-long financial nose dive have Spain's ruling conservatives feeling unusually worried about the restive northeast. "This march for independence is dangerous path to go down," said one leader from the center right popular party, Alicia Camacho. "It could lead to a rupture within Catalan society." But Catalan independence is hardly around the corner. Regardless of current sentiment, Catalonia still needs Madrid. The region has just asked the central government for a seven billion dollar bailout. Which explains why Catalonia's very president, Arthur Mas, a self proclaimed Catalan nationalist, was a no-show at today's independence march. Instead, he offered his moral support in this video. Mas has a tough balancing act to perform. And it's even more complicated, because Catalonia's bailout request has created friction with other Spanish regions. The president of the southwestern region of Extremadura, Jose Antonio Monago, said its unfair that ordinary working Spaniards will have to cough up the bailout dough. To counter this alleged injustice, he's announced that his region will ignore a new tax increase on cultural events. That sets up a showdown between Extremadura and Madrid. Which isn't what Spain's Prime Minister, Mariano Rajoy needs at all. Rebellious regions only hurt Spain's credibility as it seeks to reign in its borrowing costs. But it may already be too late. Spain has gotten a $125 billion bank rescue. Given the country's shrinking economy, most analysts now believe Spain will soon ask for a full blown government bailout, joining the ranks of Greece, Portugal and Ireland.