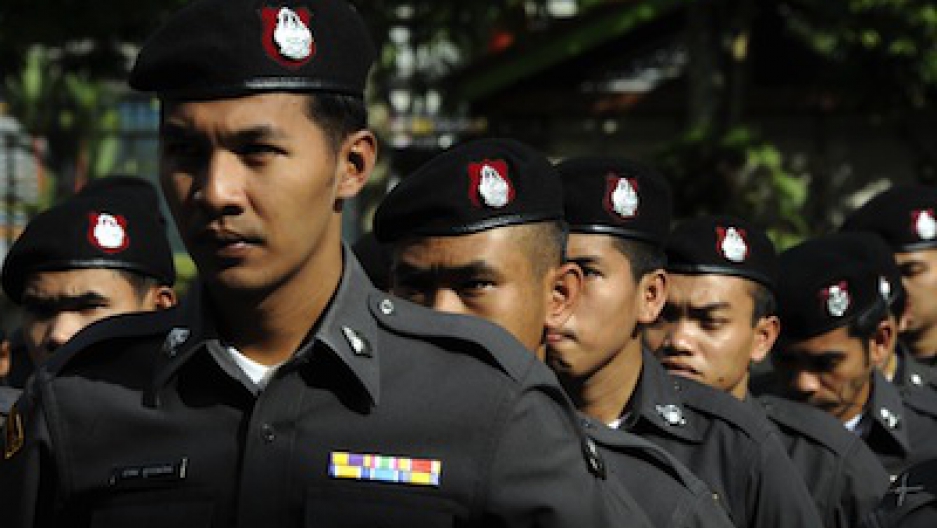 Back in July, when blogging about a volunteer cop filmed while kicking a couple off a speeding motorbike, I wrote that "police corruption is one of Thailand's most intractable problems. Roadside shakedowns and abuse are common. But perhaps an army of camera phone-wielding, dashboard video-recording motorists is part of the solution."

The latest contribution to the Thai cops behaving badly on YouTube collection depicts a commonplace payoff to a traffic cop.

This isn't a Rodney King moment in which cameras happen to be running when abuse goes down. This is more like reverse entrapment: a cabbie pulls an illegal U-Turn in a spot known for shakedowns, offers up 400 Thai baht ($12) and an accomplice records the payoff. Anyone who routinely rides in Bangkok taxis has seen this sort of transaction take place.

I'll translate the dialogue between the taxi driver and the cop.

And with that, cash changes hands and the taxi driver skates away. (For what it's worth, I suspect he could have paid much less.)

It's important to consider the source of this video. It's been released by Chuvit Kamolvisit, the former owner of a brothel empire and a confessed briber of police who has since entered parliament with an anti-corruption agenda. (Here's my interview with him back in 2010.)

Regardless, videos such as this reveal the role discrete video cameras (and mobile phones) can play in exposing routine police corruption.