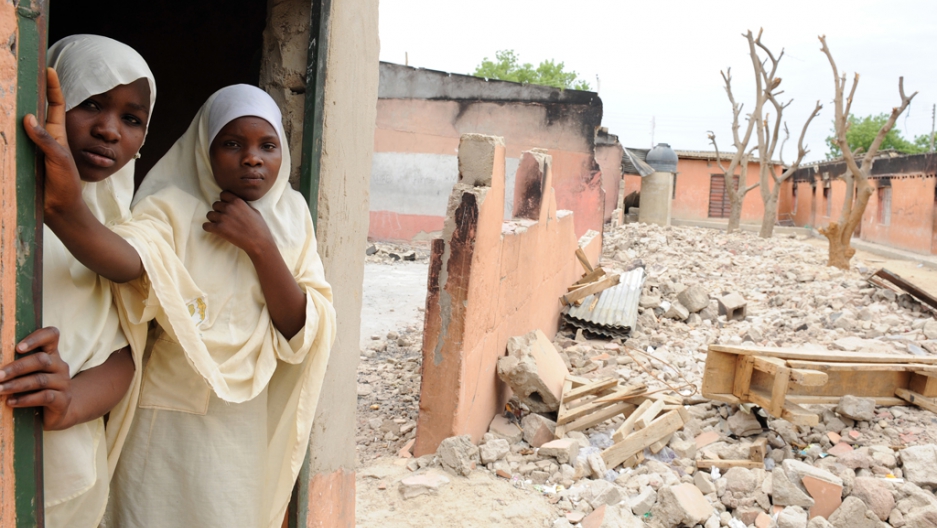 Female students stand in a burnt classroom at Maiduguri Experimental School, a private nursery, primary and secondary school burnt by the Islamist group Boko Haram to keep children away from school in Maiduguri, northeastern Nigeria on May 12, 2012. The Nigerian Islamist group known as Boko Haram has grown from a northeastern-focused sect targeting local leaders and police to a many-headed monster capable of deploying suicide bombers to attack the United Nations, police headquarters and one of the country's most prominent newspapers.
Credit: PIUS UTOMI EKPEI
Share

ABJUA, Nigeria — For many here, Boko Haram, a local militant group born out of Nigeria’s crippling poverty, has grown up and is now every bit a terrorist organization.

“With what they are doing in Nigeria, Boko Haram and Al Qaeda can definitely have a working relationship,” said Alexander Akinwale, 34, at the gift shop where he works in Nigeria’s capital. “They have the same style. The style is destruction.”

This year alone, authorities blame Boko Haram for the deaths of 650 people.

Leaders of Boko Haram have boasted about their connections to terror groups like Al Qaeda and the Somalia-based Al Shabaab. Given the scale of the attacks Boko Haram has launched from its stronghold in the country’s impoverished north, it comes as little surprise to Nigerians that it is getting outside help.

“You need a lot of money to do what they are doing,” said Idang Alibi, political columnist for Nigeria’s Daily Trust newspaper. “The level of their sophistication and the level of the arms they are using … tells me there is a link.”

Gen. Carter Ham, who heads the United States Africa Command, said the increased coordination between Al Qaeda in the Islamic Maghreb (AQIM), Al Shabaab and Boko Haram, is threatening not only Africa’s security, but the world’s.

“The linkages between Al Qaeda in the lands of the Islamic Maghreb and Boko Haram are most worrisome in terms of the indications we have that they are likely sharing funds, training and explosive materials,” Ham said in a speech in June.

Days before Ham’s statement, the US State Department named Boko Haram’s assumed leader, Abubakar Shekau, and two other associates, “Specially Designated Global Terrorists.” But unlike Al Qaeda in the Islamic Maghreb, the United States has yet to deem Boko Haram a “Foreign Terrorist Organization.”

With the way things are going, it might not be long. This year has been the most violent in the group’s existence.

Abubakar Umar Kari, a senior lecturer at the University of Abuja, said the organization formed in 2002 in the northern city of Maiduguri, where Muslim cleric Mohammed Yusuf opened a mosque and an Islamic school and told his followers to reject Western excesses and education. The group was called Jama'atu Ahlis Sunna Lidda'awati wal-Jihad, which in Arabic means, "People Committed to the Propagation of the Prophet's Teachings and Jihad.”

“Boko Haram,” which roughly translates to “books are sinful,” is actually a local, and derisive, nickname.

“Jihad,” for most Muslims, refers to an internal struggle, and in the first years of its existence, Boko Haram was a nonviolent organization. Attacks began as sectarian tensions in the country’s north flared in 2009. When Yusuf was killed while in police custody that same year, the group’s extremism flared.

Boko Haram has since targeted churches, markets, schools, media houses, police stations and government offices. Most of the victims have been in the north, with some notable exceptions, including last year’s bombing of a local United Nations headquarters in Abuja that killed 25 people, and the bombing of three media outlets, including ThisDay, a prominent Nigerian newspaper.

“There is no boundary to where they can venture out,” Kari told GlobalPost. “They appear to succeed in whatever they set out to do.”

Nigerian officials disagree on the best way to end the threat. But most favor negotiations.

“It’s not a situation that we can deal with, with outright military action or police action on the street,” Hussaini Abdu, who heads anti-poverty organization ActionAid in Nigeria, told GlobalPost.

He said any efforts — military or otherwise — would fail as long as young people in Nigeria’s north are out of work and out of school.  Boko Haram’s leaders, he said, might be ideologues with connections to international terror groups, but the foot soldiers are mostly local teenagers with nothing else to do.

“Anywhere that poverty exceeds 40 percent to 45 percent you should be ready for insecurity,” he said.

More from GlobalPost: Out of Mali's chaos, Al Qaeda rises

The number of people in Nigeria, Africa’s most populous country, living in absolute poverty rose to 61 percent in 2010, according to government statistics, with northern states generally growing poorer, faster.

The Nigerian government claims that its political opposition is supporting Boko Haram and that the attacks are aimed at destabilizing the presidency of Goodluck Jonathan.

On the streets of the capital, it’s not hard to find Nigerians who agree with that assessment. At his gift shop, Akinwale said someone is paying for Boko Haram, and if it’s not Al Qaeda or other foreign organizations, it must be politicians looking to unseat the president.

Akinwale lives only a few minutes from the newspaper office that was bombed in late April. The windows of several buildings on the block remain shattered.

“It could happen anywhere,” he told GlobalPost. “It could happen in the market, on the street, at a fast food restaurant. Everyone is nervous in Abuja. You can’t walk freely.”