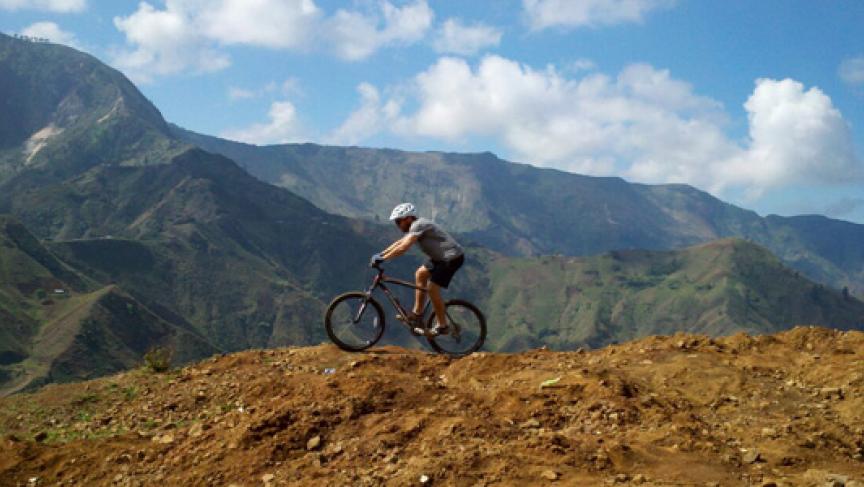 Share
Haiti sent a number of athletes to the Olympics this year, but only one — a Judo fighter — actually lived and trained in Haiti. The reason, of course, is the lack of resources and infrastructure. But some see opportunity in the absence of infrastructure — or at least the lack of paved roads. Registration has opened for an elite international mountain bike race being planned for January 2013. It will cover about 80 miles and involve some 10,000 feet of climbing, on some steep, rocky, harrowing terrain. The brainchild of the race, Philip Kiracofe flew to Haiti from his home in New York following the 2010 earthquake. He volunteered in the hardest-hit town, Leogane, but decided there was a better way to help. "The thing that Haiti needs is people spending money. So the idea that someone would go down in Haiti and have a great time is exactly the point. The Dominican republic, the neighboring country on the island, generates 14 percent of its GDP from tourism. Haiti has none. Tourism — specifically off-the-beaten-track adventure tourism — seemed a solution. So Kiracofe founded Mountain Bike Ayiti and began planning the Haiti Ascent Stage Race. "The original idea for MTB Ayiti was just a bike race; bring some racers down and you have a multi-day stage race, and then they go home. But it evolved into a six-day five-night race, wrapped in a cultural immersion experience. And so we realized we have a captive audience of some of the best mountain bikers in the world and some amateur bikers," Kiracofe said. The idea is to get them to fall in love with Haiti. That is: Have them do some work on trails, buy handicrafts, hear live music, and come back every year. I met with some of the local organizers, members of a cycling club, at the beginning of the course, in front of the remains of the National Palace in downtown Port-au-Prince. And then, almost immediately, we began the seemingly endless ascent by truck, through the city and into the suburbs, villages, farmland, on an increasingly challenging road offering increasingly dramatic vistas. And a welcome drop in temperature. Not only have none of these men ever been on a mountain bike. This is a really hard course. If the steepness and rocks don't get you, the winding razor's-edge roads with terrifying vertical drops might. Haiti gets its name from Aytiti, the Taino word for 'land of mountains'. And the Haitian expression 'beyond mountains, more mountains,' refers to its topography and well as the endless problems the country faces. Jonas Ronald heads the Leogane Cycling Club. He says a big part of the race's appeal is the exposure — and resources — intended to along with it. There is no bike shop in Haiti. Ronald and other cyclists have to ask friends overseas to purchase and bring them bikes. Then they fix and maintain them themselves. "It's very difficult for Haitians to cycle at this level," Ronald said. "We want to partner with foreigners so we can open a bike shop here, to sell bikes, rent bikes, and take people on bike tours." This is exactly what Mountain Bike Ayiti is planning to do. But the hope for help goes well beyond these bikers. After two hours of driving the course, our car will go no further. We get out and walk. A small store is opening on the roadside, and Rosemene Joseph is setting up a table of undergarments and toiletries for sale. It's hard to imagine how she would benefit from cyclists racing past her business, but she sees it differently. "It's a good thing," she said in Creole, "because when a foreigner comes here there's a lot they could do. There's a lack of schools and we don't have a health center nearby." Henristal Rimitil, an elderly farmer, chimes in. "I'm really happy, because when they come they'll see all the problems we have, how poor we are." Residents here are oblivious to the hordes of NGOs that descend on the capital and other parts of the country. This might explain their hopes for what the race might do. Tour experts say this is part of the beauty of adventure tourism. It reaches a remote population, and shows foreigners a different face of the country. This is why Cyril Pressoir, a Port-au-Prince-based tour operator, is on board. "We're tired of the face that we're served constantly and it doesn't reflect reality. The reality of Haiti is so complex. I'm all for mountain biking or any other type of adventure sports, anything that can get people to come to Haiti with an open eye, love Haiti, and become ambassadors," Pressoir said. Oh, and the race ends in the southern beach city of Jacmel, just in time for the city's wild and creative Carnival. The bikers simply can't escape without a good dose of the landscape and vivacious Haitian culture.