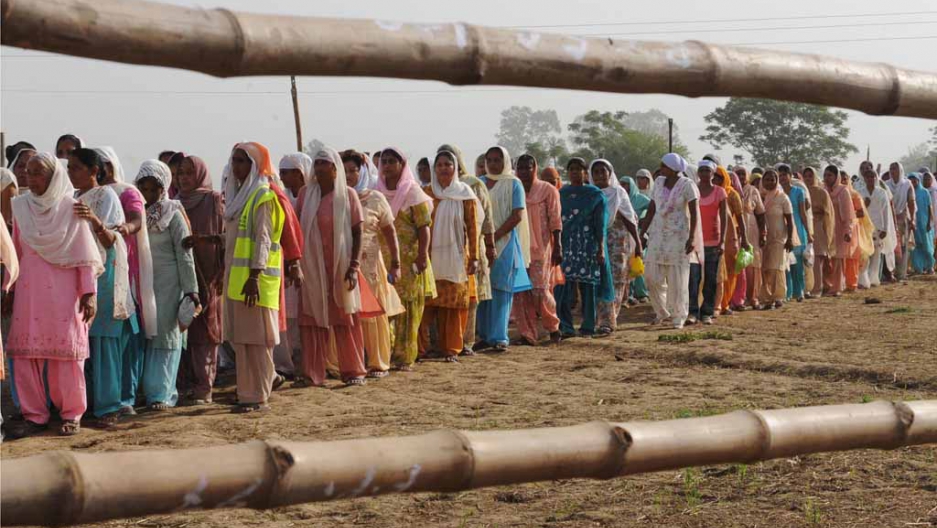 JALANDHAR, Punjab — Seated in the regional passport office in Jalandhar, a provincial city at the heart of India's breadbasket, 39-year-old Sarabjit Kaur tells a harrowing story.

For more than a decade, she has endured a miserable sham marriage. Soon after she married, her husband fled to the UK. To force her parents to pay an illegal dowry, her in-laws have allegedly beaten her, forced her to do menial chores, denied her food, and cut off the electricity to her room.

At first, Kaur's in-laws refused to acknowledge the birth of their granddaughter at all. Today, having nominally disowned their son, they force Kaur and her daughter, now 10, to live as unwelcome guests in a tiny room, sequestered from the rest of the house.

Kaur is one of thousands of women in Punjab who have fallen victim to such marriage scams.

Armed with a passport and a plane ticket, unscrupulous men and their families exploit the value of a green card or foreign work permit to extort exorbitant dowries from their brides. They marry and then flee.

More from India: Is China right about the internet?

They may take on second wives to obtain a virtual slave. Or they may simply make a trip to India for a so-called “holiday marriage” — complete with a big party, lavish gifts, and a week of free sex.

According to India's National Commission for Women, as many as 20,000 brides have not even seen their husbands since their supposed honeymoon.

Recently, however, these women have received a lifeline from an unlikely hero: Passport officer Parneet Singh.

Using an obscure footnote in Indian law, Singh has begun canceling the passports of runaway husbands — forcing them to face the music or go into hiding abroad as illegal aliens. And it's already working.

“We have been able to solve about 60 or 70 cases with this experiment,” said Singh.

More from India: The story of a highway

For decades, the Doaba region of the Punjab — the fertile lands between the Beas and Sutlej rivers — has been known for offering its daughters in marriage to “non-resident Indians” or “NRIs” working in Canada, the UK and the US. Fraud seems nearly as common as love in these arranged unions.

“We have a real problem here in our region. There are 30,000 women [with problem NRI marriages] in Punjab,” said Singh. “NRIs come here, they marry those innocent girls, and they leave for abroad. The girls are mostly from poor backgrounds, and the guys are rich. When they leave this country, they are not bothered. And the girls are left to their fate.”

Out of those 30,000, Singh says some 15,000 come from his region, which comprises four districts: Kapurthala, Jalandhar, Hoshiarpur and SBS Nagar.

For women like Kaur, who is still fighting in court to force her husband to take financial responsibility for their daughter, there was virtually nowhere to go for help. Due to the low status afforded to women in most Indian communities, the police generally side with the husband's family.

India's courts are notoriously slow, and extradition from the US or Canada for murder — much less a marital dispute — is virtually out of the question. And the social stigma associated with being divorced, or even returning home to live with their parents, leaves many women with no choice but to endure.

As Officer Singh discovered, however, where the NRIs' ability to run for foreign shores helped husbands to cheat with impunity, unless they'd been granted foreign citizenship, their freedom and their livelihood depended on their ability to get and maintain a valid Indian passport.

“When the passport is canceled, what are the problems they have? First, if they are in this country, they'll not be able to leave,” Singh said. “Second, if people come to visit their relatives here in India, when they land at the airport their passport is taken by the immigration authorities. Third, suppose a person is staying in Chicago. His passport gets expired. If we have already canceled this passport, he will not be able to get it renewed. He has two choices: either to stay illegally in that country or to come back.”

For most men, that creates a huge incentive to resolve their marital disputes as swiftly as possible.

Navdeep, a 29-year-old doctor from Jalandhar, had been married to a marine engineer for nine months before he and his family started to insult her and demand money — even going so far as to throw her from a speeding car and attempt to strangle her on two separate occasions.

“This is not a good country for women,” Navdeep told GlobalPost in Singh's office. “You can beat her like an animal, and she won't be able to do anything.”

Today, Navdeep is divorced. But that's thanks to Singh's passport office, rather than the court system.

“If a husband [involved in a dowry or divorce case] holds a passport with a foreign visa, he's supposed to surrender it in court,” Navdeep said. “But none of the courts, not the high court, not the civil court, asked him to surrender his passport.”

Her husband was on his way out of the country when Navdeep rushed to Singh's office to lodge a complaint that he was trying to flee from a merchant ship leaving one of India's dozens of ports. Soon, though, he was back in Jalandhar.

“Because his passport was impounded, I got justice," said Navdeep. "I got divorced.”

Kaur's husband is still abroad. But she's confident that Singh's move to cancel the man's passport has turned the tide in her fight, too. Because of Singh, her husband has not been able to renew his visa, so he has been living illegally in the UK since 2010 — unable to work as a university professor.

And just the day before she met with GlobalPost, she won a court judgment saying that she had the right to live in the matrimonial home, regardless of whether the deed says it belongs to her husband or to his parents.

She believes that a financial settlement for her daughter can't be far down the road.

“Parneet Singh has totally changed the scenario of the case,” Kaur said. “I was begging shelter and maintenance for me and my daughter. Now, they are begging in front of me — 'Please, do not do this to our son.'”